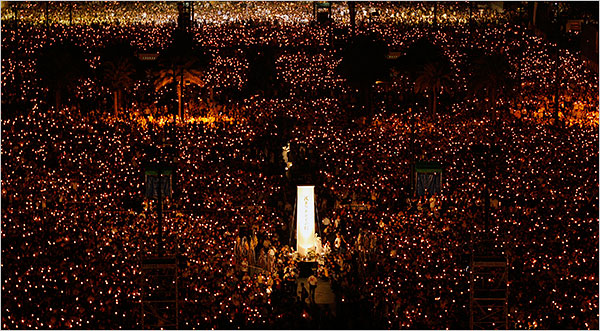 The regime cannot control everything.

The people in the People’s Republic look back, to go forward.

A vigil marking 20 years since the Tiananmen massacre
has been held in Hong Kong, the only part of China to commemorate the
event…

An estimated 150,000 people gathered in Victoria Park for the annual event…

Within an hour, half a dozen basketball courts had been filled with
people lighting candles, sitting calmly and holding white flowers.

Some of Hong Kong’s busiest shopping streets were closed off to handle the human waves and still they kept coming.

The world is watching.

“We are calling on the generation of the 1989 massacre, both in
China and overseas, as well as those who came before us and those who
will come after us to work together and combine our strengths,” the
nine said in a joint statement read out by Wang Dan, one of China’s
most wanted men.

The Dalai Lama is calling on the Chinese government.

The exiled Tibetan leader says he “respectfully honours”
the dead of June 4th and asks the Chinese government to answer the
questions of its people.  “The students involved in the Tiananmen
Square movement – he continues – were neither anti-communist nor
anti-socialist. Their speaking out in defence of the Chinese people’s
constitutional rights, in favour of democracy, and taking a stand
against corruption, truly conformed to the underlying beliefs of the
Chinese Communist government”.

Or, at least the underlying beliefs of the Chinese people.

The Dalai Lama asks the Chinese government for “courage
and far-sightedness”, and appeals that in commemorating the 60th
anniversary of the Republics foundation this October, China “review the
events of June 4, 1989”. Only in this way will the “superpower” enhance
“its international standing as a truly great nation”.

In this USA Today piece, Professor Xu Youyu admits the government has successfully controlled the information, but the message is still spreading.

Xu still sees a possibility of political change — maybe
not the sweeping kind envisioned by the students at Tiananmen, but
greater freedom of expression and democracy. “Peaceful evolution, not
radical revolution,” Xu calls it.