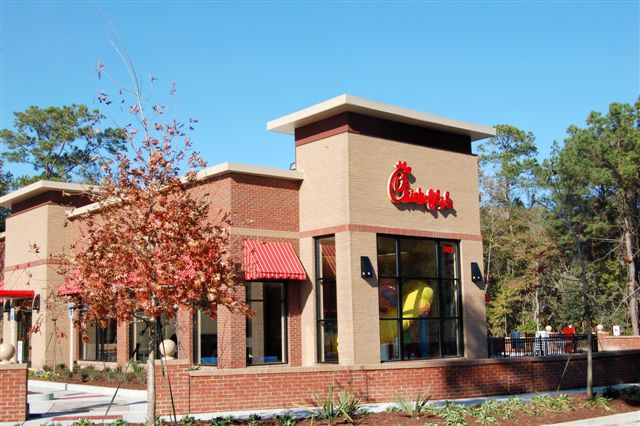 That was my reaction first time I heard the name of this place years ago. It was popular and well-frequented in some parts of the country, the food was good, the people extra friendly, but there wasn’t one anywhere near where I lived in Chicago. Times have certainly changed, but the reaction hasn’t.

The franchise has expanded and moved into my area in recent years, there’s even one around the corner now and a new one just down the road. Their following is kind of startling, especially the event atmosphere around the opening of a new franchise. By every measure in today’s economy, this is one business that seems to have it all figured out…service and quality and value and customer satisfaction…everything except political correctness. But then the Christian family that owns the company adheres to the idea that politics don’t determine what’s correct, which started this whole brouhaha.

And once again I’m thinking chick-fil-A is so…unlikely.

Last week when this erupted in the media, I paid little to no attention because there’s so much else to cover right now. Then I saw a tweet by comedian Conan O’Brien who probably put it best when he said ‘It’s hard to believe the greatest division in American politics these days is ‘pro’ or ‘anti-chick-fil-a.’ But he’s right, and that’s what this battle has come down to, in politics and culture. The flap over some alleged remarks by the company owner about the definition of marriage seemed disproportionate and overplayed, but this is an intense political season and people…or at least media…react on a hair-trigger.

The mayors of Boston and Chicago, two very political towns, actually said the Chick-fil-A company was not welcome to open a franchise in their cities because of the owner’s views of marriage. Really?

What were those views? How could a business owner’s views on anything disqualify him or her from acquiring a license to open a new business and bring new employment to a city in America?

…if a business willfully inserts itself into a political issue, that’s “one thing” but if a business is forced to declare its political beliefs — and if that declaration can mean the difference between getting a license or not, that’s “something else.”

But this Chick-fil-A story is something beyond a demand to declare oneself and face consequences — it’s even worse than that. Apparently the mainstream media has taken it upon itself (perhaps because the owners are Christian?) to define Chick-fil-A’s positions for it.

So, did you hear about that wild quote that the president of Chick-fil-A didn’t say the other day?

Here’s a piece of a CNN report that is typical of the mainstream press coverage of this latest cyber-skirmish in America’s battles over homosexuality, commerce and free speech (sort of).

(CNN) — The fact that Chick-fil-A is a company that espouses Christian values is no secret. The fact that its 1,600 fast-food chicken restaurants across the country are closed on Sundays has long been testament to that. But the comments of company President Dan Cathy about gay marriage to Baptist Press on Monday have ignited a social media wildfire.

“Guilty as charged,”, Cathy said when asked about his company’s support of the traditional family unit as opposed to gay marriage.

Now, one would assume — after reading a reference to the “comments of company President Dan Cathy about gay marriage” — that this interview . . . actually included direct quotes from Cathy in which he talks about, well, gay marriage.

In this case, one cannot assume that.

While the story contains tons of material defending traditional Christian teachings on sexuality, the controversial entrepreneur never talks about gay rights or gay marriage. Why? Because he wasn’t asked about those issues in the interview.

Read Mattingly’s whole piece, wherein he addresses the whole “well, they may not have said it but it’s what they meant, so what’s the big deal?” angle.

The big deal is simply this: the press put aside context and decided to paint this company as some radically-religious-gay-hating-entity and then let the forces of anger, hate and spite have their way with it. The truth is, one can be a Christian and still be sympathetic to some parts of the so-called “gay agenda” without signing on in toto. One can disagree on the issue of gay marriage — based on scripture, or thousands of years of tradition, or on natural law — without actually hating anyone. But the right to principled opposition is being erased, quickly, and the press is doing all it can to help erase it. We are losing the right to say, “I don’t think the same way you do; my opinions are different.” That matters, a lot.

This is our mainstream press — the people charged with the public trust — and it has moved beyond advocacy and into “search and destroy” mode.

This is not about being “right” or “wrong” on an issue. This is about menacing and bullying people into conforming or paying the price. It’s about the bastardization of the word “tolerace” in our society, to the point where the word no longer means “live and let live” or “let people be who they are”; the word has become distorted in a very unhealthy way…

If people are no longer entitled to their own opinions, or to think what they think, then we are not free people, at all. Period. Full stop. That’s a fundamental as it gets.

Read the whole piece, and click on the links in it to follow the original posts and articles she cites in those snips. It’s quite a story.

Now we have Gov. Mike Huckabee and the Rev. Billy Graham joining a growing event to support Chick-fil-A on August 1st. Even New York Mayor Michael Bloomberg called off the other mayors for their executive overreach (which was rich with irony).

After Chicago Mayor Rahm Emanuel made a big deal out of the Christian business owner’s values not being welcome in his city because they didn’t reflect Chicago values, Cardinal Francis George issued his own thoughts.

Recent comments by those who administer our city seem to assume that the city government can decide for everyone what are the “values” that must be held by citizens of Chicago.  I was born and raised here, and my understanding of being a Chicagoan never included submitting my value system to the government for approval.  Must those whose personal values do not conform to those of the government of the day move from the city?  Is the City Council going to set up a “Council Committee on Un-Chicagoan Activities” and call those of us who are suspect to appear before it?  I would have argued a few days ago that I believe such a move is, if I can borrow a phrase, “un-Chicagoan.”

The value in question is espousal of “gender-free marriage.”  Approval of state-sponsored homosexual unions has very quickly become a litmus test for bigotry; and espousing the understanding of marriage that has prevailed among all peoples throughout human history is now, supposedly, outside the American consensus.  Are Americans so exceptional that we are free to define “marriage” (or other institutions we did not invent) at will?  What are we re-defining?

His reflections are worth reading through completely.

People who are not Christian or religious at all take for granted that marriage is the union of a man and a woman for the sake of family and, of its nature, for life.  The laws of civilizations much older than ours assume this understanding of marriage.  This is also what religious leaders of almost all faiths have taught throughout the ages.  Jesus affirmed this understanding of marriage when he spoke of “two becoming one flesh” (Mt. 19: 4-6).  Was Jesus a bigot?  Could Jesus be accepted as a Chicagoan?  Would Jesus be more “enlightened” if he had the privilege of living in our society?  One is welcome to believe that, of course; but it should not become the official state religion, at least not in a land that still fancies itself free.

Surely there must be a way to properly respect people who are gay or lesbian without using civil law to undermine the nature of marriage.  Surely we can find a way not to play off newly invented individual rights to “marriage” against constitutionally protected freedom of religious belief and religious practice.  The State’s attempting to redefine marriage has become a defining moment not for marriage, which is what it is, but for our increasingly fragile “civil union” as citizens.