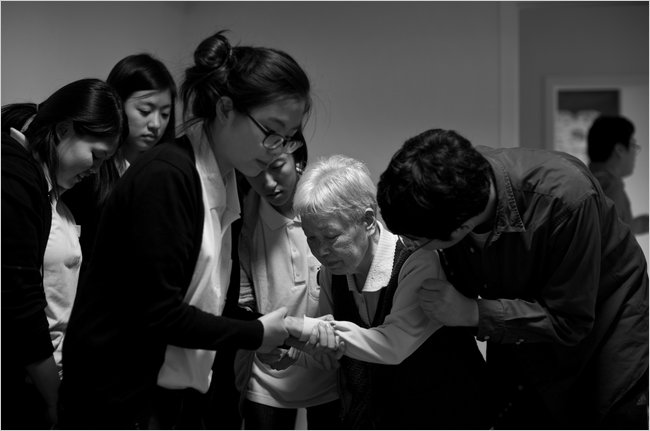 How good are your children at relating to their grandparents? How would they respond if granny developed Alzheimer’s? These questions beg an even bigger one: how will societies with an average of 2 or less children per woman cope with a burgeoning elderly population and a growing worldwide epidemic of dementia? South Korea has come up with answers in a remarkable campaign.

While nursing homes and community care or home-care services multiply (heavily subsidised by a 6.6 per cent rise in people’s national health insurance premiums), South Korea is training thousands of people as dementia supporters — among them, children aged from 11 up, reports The New York Times.

The youngsters are going to programmes where they learn about dementia, how to relate to people who suffer from it and how to perform practical services for them. At the Ageing-Friendly Comprehensive Experience Hall outside Seoul, 11- to 13-year-olds try going to have a bath while they wear strapped on splints, weighted harnesses and fogged-up glasses — so they know how it feels to be old and disabled.

With early diagnosis and trained assistance the authorities hope more people will be cared for at home. The over-65 population expected to rise from 9 per cent today to 20 per cent in 2026, and dementia is straining the country socially and economically.

“At least one family member has to give up work” to provide caregiving, said Kwak Young-soon, social welfare director for Mapo District, one of Seoul’s 25 geographic districts. Because South Korea encourages people to work well past retirement age, families may also lose dementia sufferers’ incomes.

Most families no longer have generations living together to help with caregiving, and some facilities have long waiting lists, but “we can’t keep building nursing homes,” Mr. Kwak said. “We call it a ghost. It’s basically eating up the whole house.”

South Korea also worries that dementia, previously stigmatized as “ghost-seeing” or “one’s second childhood” could “dilute respect for elders,” Mr. Kwak said. “There’s a saying that even the most filial son or daughter will not be filial if they look after a parent for more than three years.”

So the authorities promote the notion that filial piety implies doing everything possible for elders with dementia, a condition now called chimae (pronounced chee-may): disease of knowledge and the brain which makes adults become babies. But South Korea’s low birth rate will make family caregiving tougher.

Even the youngest are enlisted. Mr. Kwak, the local government official, arranges for nursery school classes to play games with nursing home patients, saying that it destigmatizes dementia and that patients who “regress to earlier days” may “find it easier to relate to young children.”

Schools offer community service credit, encouraging work with dementia patients, whom students call grandmas and grandpas. Teenage girls do foot massage at the Cheongam nursing home, which is run by Mrs. Lee, the Alzheimer’s Association president, for women without sons to care for them. (In South Korea, sons’ families traditionally shoulder caregiving responsibilities.) During one massage session, 16-year-old Oh Yu-mi rubbed a patient’s toes, saying: “I’m doing the heart. The heel is the reproductive system. It will help them excrete better.”

Of course, nothing is as good as being cared for at home by your own affectionate family members:

A patient wept as the girls left, upsetting 16-year-old Kim Min-joon, the massage group’s leader. She said social workers suggested being less effusive to patients, so the girls’ leaving would be less traumatic: “If there is love or affection of 100 grams, cut it up into 1 gram each” and distribute it over “100 visits, not all at once.” But “I’m not good at controlling that,” Min-joon said. Even at school, “The feeling of their touch remains with me.”

In the light of this problem that is enveloping the world — not only the richer countries — it is heartless and irrational that population control zealots are still trying to force birth rates down in developing countries, rather than allowing them to adjust naturally. In the Philippines, for example.