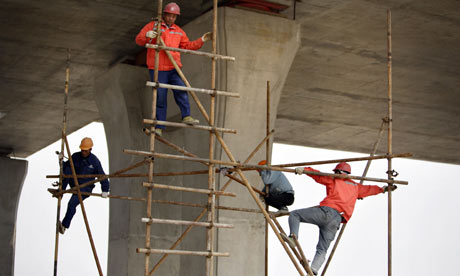 Could China be running out of workers? asks the LA Times. Changes in the economy and education, combined with a mounting demographic crisis, confront employers and the government with big problems.

In the east coast cities and the southern province of Guangdong, the manufacturing hub of China, the problem is basically a shortage of cheap migrant labour from the rural areas. Millions of these workers were laid off in late 2008 because of steep declines in exports caused by the global financial crisis.

In response, Beijing launched a massive stimulus plan that put millions of people to work building roads, airports, rail projects and power plants, many of them deep in the country’s interior. This has given workers a choice of where to work, and many are opting for staying closer to home. A man heading back to Hebei province after only 11 days working with a road crew in Shanghai — a city desperate to complete projects in time for the opening of the World Expo on May 1 — told the Times: “Why should I stay here when I can do the same work back home? I can’t stand all the rain here. It makes my back hurt.”

City employers are therefore having to coax unskilled and semi-skilled workers with better wages and conditions. The graduates pouring out of universities as a result of a government push to expand higher education are not the workforce needed and they are three times more likely to be unemployed than the average urban resident.

Behind all this is a trend that indicates an absolute labour shortage in the longer term:

China is also facing a demographic crisis. Because of the nation’s one-child policy, the number of working-age adults is shrinking rapidly. By 2050, a third of China’s population will be 60 or older, compared with 26% then in the United States.

The government may make changes to the economy but it can’t manufacture more people.