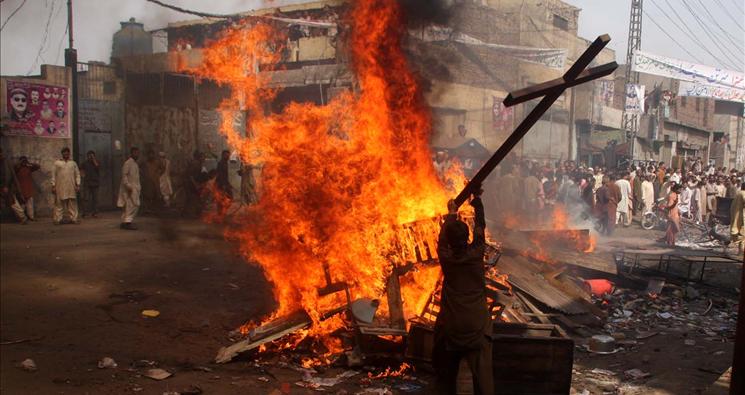 Will the 21st century see the segregation of religions? Will once-thriving minorities cease to exist in countries that they have been in for thousands of years? Will the idea of a great big melting pot of people of all different religions give way to religious cleansing and mass-migration?

According to a recent report by Open Doors (a charity that monitors religious violence and discrimination) 2015 suggested that the answer to all of those questions might be “yes”. The persecution of Christians continued to rise in 2015 throughout the Middle East and Africa; thousands of Christians were killed for their faith and millions more were forced to flee their homes and become refugees. The report can be read here and as its Introduction says “It is not good news.”

“There are many millions more Christians today who are afraid to go to church, or no longer have a church to go to; who have to choose between staying faithful to God or keeping their children safe; who have been brutalised, lost their dignity or their liberty because they share the same faith as many in our own country, but they do not share our freedom. There are many, many more today who are mourning over recently lost loved ones.”

“The headlines focus on the Middle East, but there were more recorded killings of Christians due to their faith in northern Nigeria in 2015 than in the rest of the world put together; 4,028 out of a worldwide total of 7,100 reported deaths.”

Further more than 2 million people, many of whom are Christians, have been forced to leave their homes in northern Nigeria thanks to Boko Haram and violence against Christian farmers by Hausa-Fulani tribesmen.

Another country that is highlighted (out of 50 listed in the report) is Eritrea “the North Korea of Africa”. The country’s president, Isaias Afewerki’s “totalitarian paranoia” is driving hundreds of thousands of Eritreans into exile and into the hands of ruthless, unscrupulous people smugglers. One of the reports researchers says that:

“Eritrean Christians, even though they know there is a very high probability of falling into the hands of traffickers and ruthless radical groups like Daesh [Islamic State], are still desperate to escape from Eritrea.”

Antoher country where it is becoming more difficult to be Christian is India, where the Narendra Modi’s government is dominated by the nationalist Hindu BJP party. There are reports of Christian pastors being beaten and killed and the forced conversion of Chrisitan congregations to Hinduism. On average a church is burned down or a pastor beaten three times a week says the report.

While in Iraq and Syria the demise of two-thousand year old Christian communities continues unabated. Furthermore those Christians lucky enough to escape the carnage in those countries become refugees who still face persecution and violence. Very few Christians live in the two big camps in Jordan run by the UN and other aid agencies due to their fear of intimidation and violence from hardline Muslim refugees.

“One Open Doors worker in northern Iraq who was unwilling to disclose his name told the Guardian that most Christian refugees refused to enter UN-run camps. ‘Many feel they were betrayed by their Muslim neighbours, and families are very concerned about the safety of their women and girls. They prefer smaller, church-run camps, but these are less well-resourced. Christian refugees are being bypassed by the big UN organisations.’”

I can’t really see much to give me cause to hope that 2016 will be any better than last year for Christians in large areas of the world.