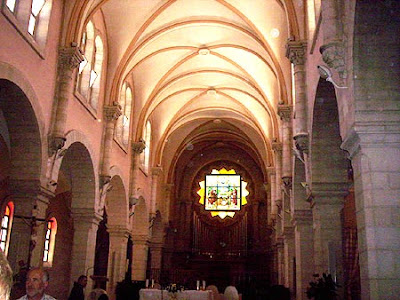 What is, is. What gets reported is another story.

What is happened in Bethlehem over 2000 years ago, and pilgrims still flock there from all over the globe every Christmas, no matter what. More on that in a minute…

But over at the Vatican, Pope Benedict celebrated the Chrismas Vigil Mass and drew a lot of attention for his message. It usually gets the roundup media coverage on Christmas Eve by most big outlets. But this time, it got that, and bit of spin in the ‘everything is political’ world.

Fox was early to report on the homily.

Pope Benedict XVI decried the increasing commercialization of Christmas as he celebrated Christmas Eve Mass on Saturday night, urging the faithful to look beyond the holiday’s “superficial glitter” to discover its true meaning…
In his homily, Benedict lamented that Christmas has become an increasingly commercial celebration that obscures the simplicity of the message of Christ’s birth.

“Let us ask the Lord to help us see through the superficial glitter of this season, and to discover behind it the child in the stable in Bethlehem, so as to find true joy and true light,” he said.

It was the second time in as many days that Benedict has pointed to the need to rediscover faith to confront the problems facing the world today. In his end-of-year meeting with Vatican officials on Thursday, Benedict said Europe’s financial crisis was largely “based on the ethical crisis looming over the Old Continent.”

Now there’s another story, the ethical crisis behind the financial crisis.

But look at what the BBC does with the Christmas story alone. They turn the homily into an attack. Here’s the lede:

Pope Benedict XVI has attacked the commercialisation of Christmas as he held the traditional Christmas Eve Mass at St Peter’s Basilica in Rome.

They must have the C team on duty at the Beeb this weekend.

Anyway, note this a few lines down:

Meanwhile, Christian pilgrims and tourists from around the world last night converged on Bethlehem for Christmas.

Yes, so let’s get back to that.

Tens of thousands of tourists and Christian pilgrims packed the West Bank town of Bethlehem for Christmas Eve celebrations Saturday, bringing warm holiday cheer to the traditional birthplace of Jesus on a raw, breezy and rainy night.

With turnout at its highest in more than a decade, proud Palestinian officials said they were praying the celebrations would bring them closer to their dream of independence.

Bethlehem, like the rest of the West Bank, fell onto hard times after the Palestinian uprising against Israeli occupation broke out in late 2000. As the fighting has subsided in recent years, the tourists have returned in large numbers.

After that intifada in the Fall of 2000, few if any pilgrims visited the Holy Land, Jerusalem and Bethlehem especially. I was there with a small group of just about the only pilgrims that ventured in over Chrismas and New Years of 2000, and it was a remarkable experience.

I was back over Christmas of 2005 and Bethlehem was packed with pilgrims from the world over, and teeming with armed police and military everywhere, which was just jarring to see on a cold and rainy Christmas Eve making our way to Manger Square. Since we were early, I got to spend some private time with my son at a shrine on the side of the upper church. After lighting a candle I knelt and bowed my head in prayer and had no idea how long that lasted, but my son told me later that during that time an Arab camera crew had come in and filmed me up close praying.

Okay. We are people of God.

On the way through small streets filled with police and military and heavily armed guards, dashing through a cold rain, we were just about at the buses when I rounded a bend and noticed a little boy hawking tourist souvenirs right where we passed. That’s a common sight there, sorry to say for the children involved, but this was different. He looked cold and scared and all he said was ‘keychains a dollar’, over and over. My son and I stopped and bout several dollars’ worth, stuffed them in our bag, and I was later surprised by how nice they turned out to be. I still have a couple.

Some say ‘Jerusalem’ and some say ‘Bethlehem’ and they show a dove with an olive branch and simply say ‘Peace.’

And that’s where it all began.