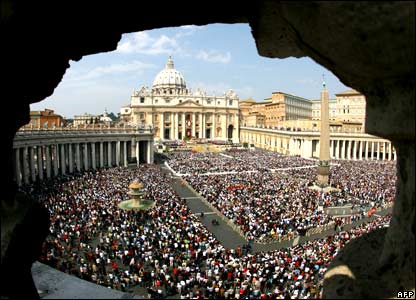 How will the Church emerge from this current crisis? Some columnists from big media are showing their concern, and offering their ideas. And the two featured here seem to be thinking out loud, turning the issues around, trying to work through changing scenarios. Both credit Pope Benedict for exceptional leadership.

New York Times blogger Ross Douthat examines the nature of centralized power and the responsibility of Rome “when local bishops foul up.”

Thus the great irony of the sex abuse scandal: It’s damaged Rome’s moral credibility immeasurably, but at the same time it’s leading to a Catholic future in which the Vatican actually expands its control over church administration.

Catholicism’s hierarchical culture notwithstanding, the church has never been nearly as centralized, nor the pope as powerful, as outsiders and critics often like to imagine. The pontiff appoints bishops and makes doctrinal pronouncements, but popes wrestle with their bureaucracies just like any politician, and the day-to-day administration of the church is almost completely localized.

There’s irony in that, alright, because dissenters in the Church want authority de-centralized, and yet more authority will inevitably shift to Rome in order to secure administration of worldwide church matters like the ‘safe environment’ programs.

WaPo’s Michael Gerson considers another inevitable shift….out of a “religion of the tribe” to a “religion of humanity,” without accusing it of tribalism per se. In fact, Gerson is sympathetic to the Pope and the Church.

By any human standard, Pope Benedict XVI and the American Catholic Church are getting a bad rap in the current outbreak of outrage over clerical sexual abuse.

Far from being indifferent or complicit, then-Cardinal Joseph Ratzinger was among the first in Rome to take the scandal seriously. During much of his service as head of the Congregation for the Doctrine of the Faith, the future pope had no responsibility for investigating most cases of sexual abuse. Local bishops were in charge — and some failed spectacularly in their moral duties. It was not until 2001 that Pope John Paul II charged Ratzinger with reviewing every credible case of sexual abuse. While poring through these documents, Ratzinger’s eyes were opened. The church became more active in removing abusive priests — whom Ratzinger described rightly as “filth” — both through canonical trials and administrative action.

It’s “difficult to deny the church has made progress with a zero-tolerance policy,” Gerson contends. But the clerical scandal works too well for church detractors, he adds, so anti-clericalism will go on in the press.

But the upside is that it may force the Church to return to its roots of reaching out to all humanity, Gerson reflects,

The Catholic Church’s initial reaction to the abuse scandal was often indefensible. Now, through its honesty and transparency, it can demonstrate a commitment to universal dignity — which includes every victim of abuse.

Especially them. And everyone else.