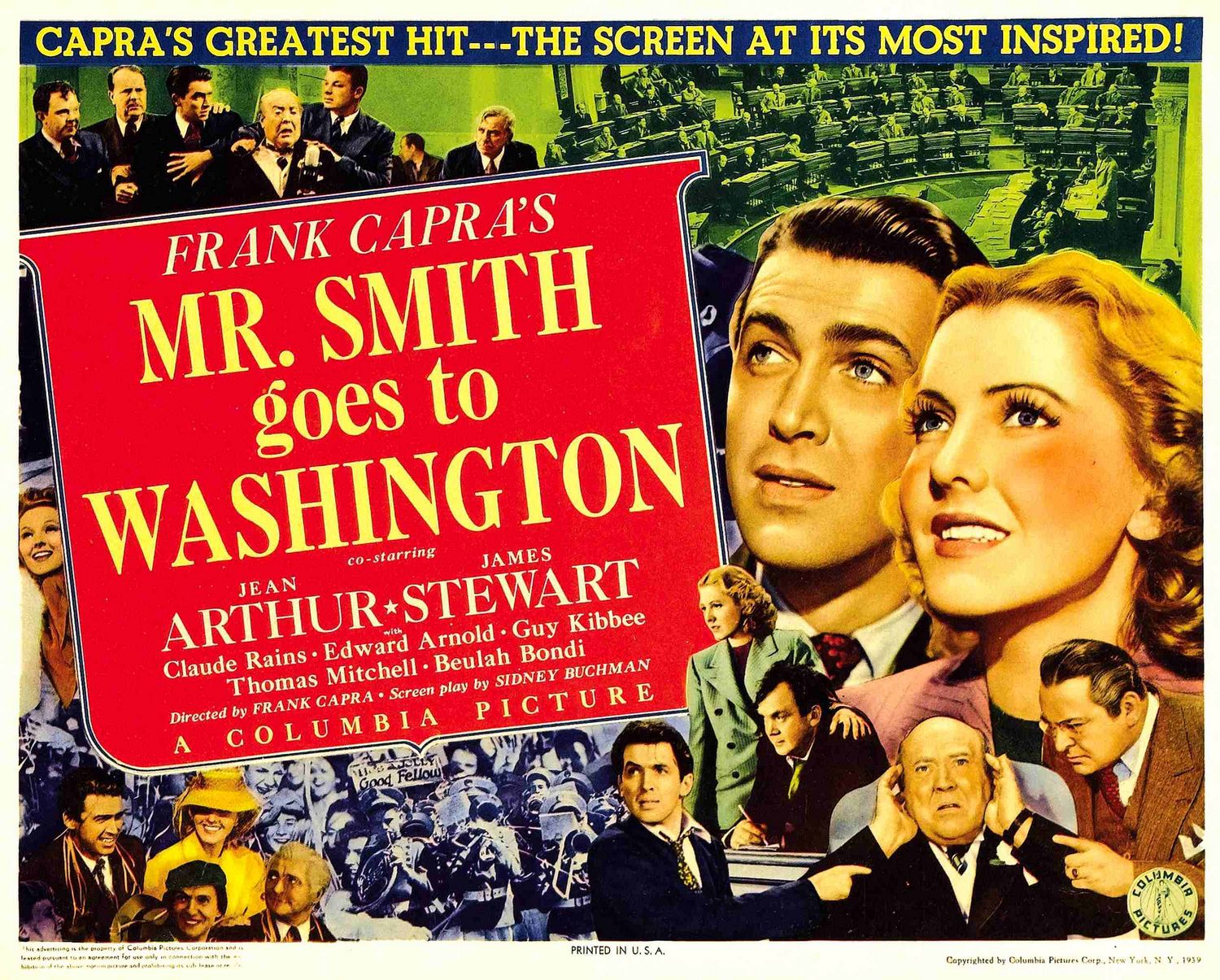 It’s always wonderful to see when ‘the actor and the role meets,’ that is when a role seems to be tailor-made for an actor that it’s as he disappears into that character. I felt that was the case with Peck as Atticus Finch in To Kill a Mockingbird, and here, James Stewart seemed to have become Jefferson Smith despite not being the first choice for the role. The role was meant for Gary Cooper who was supposed to reprise a similar one he did in Mr Deeds Goes To Town (also by Capra), but he was unavailable. Having seen this film, I can’t picture anybody else but Stewart in the role.

What’s interesting about this film is that even though the subject matter is about American politics, it doesn’t concern a specific party; we’re never told if Jefferson Smith was a Republican or Democrat. The state that he and Senator Joseph Paine (Claude Rains) come from was never mentioned, either. It’s a classic David vs Goliath story, as Smith was a nobody in the grand political scheme when a governor of the unnamed Western state picked him to replace a deceased senator. He’s picked because of his wholesome Boy Scout (or Boy Rangers in the film) image, the corrupt political boss Jim Taylor and his minions think Smith’s lack of experience think he’d be easy to manipulate. Of course things don’t go exactly to their plan.

The word ‘filibuster’ seems to have become a dirty word in Washington. Frankly I don’t know much about the intricate and twisted world of politics, so it was fascinating to see Smith getting lectured from his own secretary Clarissa Saunders on how to get a bill passed. It’s certainly one of my favorite scenes from the entire film:

This is the first time I saw Jean Arthur in anything and her portrayal of Saunders is brilliant. Nice to see a smart and sassy female character, not unlike another heroine in another famous 1939 film, which took the Best Picture that year, Gone With The Wind. Now, Saunders is nowhere near as manipulative as Scarlett O’Hara of course, but she’s also beautiful and knows her way around a man’s world.

The whole conflict revolves around building of a dam by the Willett Creek, which is the same area of land where Smith wants to build his national boys camp. Naturally Smith is no match for the Taylor Machine in terms of money and clout, and the political Goliath is determined to crush David by any means possible. Having been *crucified* (that’s the exact word used by Rains’ character) by the Taylor Machine, Smith was ready to give it all up when Saunders persuaded him not to. That propels him to launch a filibuster to clear his name just before he’s kicked out of the Senate.

I was totally engrossed in the story from start to finish, and the third act is certainly the most rousing part. It’s certainly an inspiring story told with an unapologetic sense of virtue. A dissenting voice against this film is perhaps that it lacks subtlety. At times perhaps the audience, especially those on the cynical side might feel they’re being hit over the head with the morality lesson. But you know what, I happen to think it’s great to see a film that celebrates goodness and everything we should aspire to as a human being. Smith is no superhero, he has no superpower of any kind, but he certainly has the power to inspire others to stand up for what’s right no matter what the cost. In essence, that’s what a true hero is all about.

As I mentioned before, Stewart is perfectly cast as Smith and he certainly makes for a protagonist worth rooting for. The supporting cast is superb all around. Thomas Mitchell , who in the same year played Pa O’Hara in Gone With The Wind, portrayed journalist Diz Moore who’s in love with Saunders. My favorite is Claude Rains as the Senator whom Smith looks up to but ends up betraying him. His emotional struggle throughout the film is palpable and fascinating to behold and Rains has the charisma and gravitas to own a scene

This film is full of rousing scenes as well as humorous moments. Smith’s obvious naiveté is amusing and endearing but never ludicrous. There’s a hint of romance between Saunders and Smith, but yet it never took over the story. The ending doesn’t end with a neat little bow as our protagonist collapsed in exhaustion after talking non-stop for 24 hours, but he remains defiant and even hopeful to the end.

The change of heart of the antagonist may seem abrupt here but I think Mr. Paine have been convicted that what he did was wrong long before he finally had the courage to confess it. There’s a timeless quality about this Frank Capra film, it’s relatable for any era because its message and its ideals are not confined by a specific time frame. No matter what year it is, greed, oppression and exploitation are never a good thing, and we’ll always root for someone who perseveres to rise above improbable odds.

Ruth Maramis writes from Minneapolis. She blogs at FlixChatter.