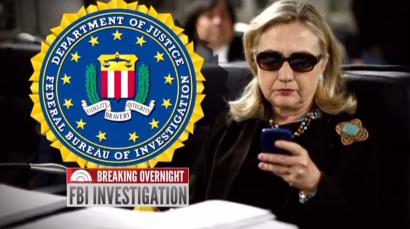 It’s what you can get away with that matters now.

That was proven, yet again, by FBI Director James Comey’s long-awaited remarks Tuesday summing up the bureau’s investigation into and findings on former Secretary of State Hillary Clinton’s rogue email server operation.

Even the New York Times didn’t hold back.

Hillary Clinton may not be indicted on criminal charges over her handling of classified email, but the F.B.I. director, James B. Comey, all but indicted her judgment and competence on Tuesday – two vital pillars of her presidential candidacy – and in the kind of terms that would be politically devastating in a normal election year.

The silver lining for Mrs. Clinton is that this is not a normal election year.

This is really some piece.

Mrs. Clinton’s campaign is built on the premise that she has the national security experience and well-honed instincts to keep Americans safe in the age of terrorism, and that Donald J. Trump does not. Nearly every day, she seeks to present herself as a more thoughtful and responsible leader.

She has spent months describing Mr. Trump as “reckless,” “unprepared” and “temperamentally unfit” to be president, and she has presented her four years as secretary of state and eight in the senate as unparalleled preparation for becoming commander in chief.

Yet in just a few minutes of remarks, Mr. Comey called into question Mrs. Clinton’s claims of superiority more memorably, mightily and effectively than Mr. Trump has over the past year. And with potentially lasting consequences.

There is no way of getting around this: According to Director James Comey (disclosure: a former colleague and longtime friend of mine), Hillary Clinton checked every box required for a felony violation of Section 793(f) of the federal penal code (Title 18): With lawful access to highly classified information she acted with gross negligence in removing and causing it to be removed it from its proper place of custody, and she transmitted it and caused it to be transmitted to others not authorized to have it, in patent violation of her trust. Director Comey even conceded that former Secretary Clinton was “extremely careless” and strongly suggested that her recklessness very likely led to communications (her own and those she corresponded with) being intercepted by foreign intelligence services. Yet, Director Comey recommended against prosecution of the law violations he clearly found on the ground that there was no intent to harm the United States.

Why? How did it come to this?

In essence, in order to give Mrs. Clinton a pass, the FBI rewrote the statute, inserting an intent element that Congress did not require. The added intent element, moreover, makes no sense: The point of having a statute that criminalizes gross negligence is to underscore that government officials have a special obligation to safeguard national defense secrets; when they fail to carry out that obligation due to gross negligence, they are guilty of serious wrongdoing. The lack of intent to harm our country is irrelevant.

Read this whole piece carefully, it captures the essence of what went on here.

It is a common tactic of defense lawyers in criminal trials to set up a straw-man for the jury: a crime the defendant has not committed. The idea is that by knocking down a crime the prosecution does not allege and cannot prove, the defense may confuse the jury into believing the defendant is not guilty of the crime charged. Judges generally do not allow such sleight-of-hand because innocence on an uncharged crime is irrelevant to the consideration of the crimes that actually have been charged. It seems to me that this is what the FBI has done today. It has told the public that because Mrs. Clinton did not have intent to harm the United States we should not prosecute her on a felony that does not require proof of intent to harm the United States. Meanwhile, although there may have been profound harm to national security caused by her grossly negligent mishandling of classified information, we’ve decided she shouldn’t be prosecuted for grossly negligent mishandling of classified information.

Yes, it’s as convoluted as it sounds. But read it for what it says, which is clear.

I have just returned from a two week family vacation in Europe, right smack at the time of the Brexit referendum and the start of the fallout from that. And also in the area when Austria and Italy have been going through political spasms along with more of the globe than one detects within the US borders.

But returning home just before Independence Day weekend, with celebrations of what freedom means and how hard fought it was won, promised to be fortifying. However, with back to back terrorist attacks happening abroad just after returning and the national search for a leader in the U.S. taking on increased gravity, only to have old school politicking carrying news cycles over the Fourth of July weekend involving the Clintons, the Justice Department and the FBI, followed by Comey’s backhanded exoneration of Mrs. Clinton, it was deflating.

Or, at least a reminder that the greatness, honor, leadership, strength and character we seek and need must come from us and not some candidate of a political party. It is a time of upheaval alright. Let’s focus on where our treasure really is – on our communities, our families, ourselves – to do what is right and good and true, and make a coalition to raise the bar on what is necessary for a just, virtuous and humane society.

And then hold politicians who seek higher office to rise to higher standards.