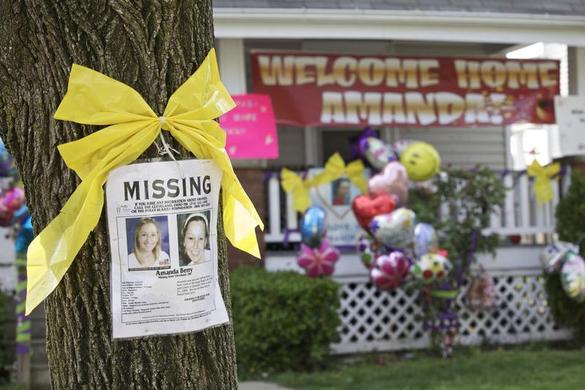 Over the last couple of days, the news has been dominated by the story of the three women abducted in Cleveland between 2002 and 2004. And what a story! While their discovery is definitely a cause for celebration, I can’t help but think about how it would have been for their families.

The grief of having a missing person in your family is hard to imagine. There wouldn’t be any closure, not knowing whether your loved one was dead or alive. It would feel so bizarre to go on with everyday activities after such an event!

According to reports, Amanda Berry was abducted on the way to her own 17th birthday party. Gina DeJesus was just on her way home from school, and Michelle Knight was last seen at her cousin’s house. Such normal activities, that ended up having such a huge unforeseen cost.

I can’t even try to comprehend what their families went through. Berry’s mother died in the years afterwards, from heart failure. There is the most heart-wrenching photo in news reports of DeJesus’ father holding a massive photo print of her after she went missing. It’s impossible that life could ever be the same.

As for the women, that’s up to 11 years of their lives gone, in which it seems that they were treated pretty badly. Their education was brought to a standstill, and it appears that two of the women even bore children during that time – what a situation to bring a child into! But at the same time, those kids would have given so much comfort and a degree of happiness to the women’s lives.

Isn’t it amazing how one person’s actions can impact and harm so many lives? I have no doubt that their abductor, Ariel Castro, has some kind of mental issue. As a result, so many lives have been impacted and harmed. But at the same time, the tiny action of a neighbour noticing Berry’s pleas for help has turned the situation around, and let them be reunited with their families and lives.

It does make me wonder – if I saw someone in need, would I help them out? As a society, we tend to want to avoid getting involved with strangers, because it risks complicating our own lives. Let’s just hope that the victims won’t suffer major psychological harm, and that if we see someone in help, we’ll be brave enough to do something about it.