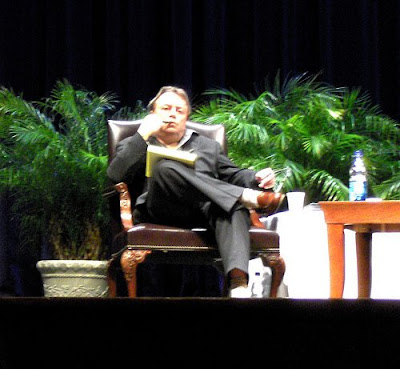 Cardinal Gianfranco Ravasi’s Pontifical Council for Culture has held ‘a series of events around Europe for atheist and agnostic intellectuals to meet and talk with Catholic counterparts.’ Cardinal Ravasi is going to miss Christopher Hitchens.

“I had no way of inviting Hitchens to enter the courtyard,” wrote Cardinal Ravasi, who has invited several high-profile atheists to events in recent months, including Pope Benedict’s World Day of Peace gathering in Assisi in October.

In his analysis of Hitchens’ worldview, Cardinal Ravasi drew an analogy to a conversation once held between the French Catholic philosopher Jean Guitton and the cancer-stricken French President Francois Mitterrand.

Guitton explained that his experience as a philosopher told him humanity had “the choice between two solutions: absurdity and mystery.”

When Mitterrand asked if the two concepts were not, in fact, identical, Guitton replied “no, absurdity is an impenetrable wall against which we splat in suicide,” but “mystery is a ladder you climb from step to step towards light and hope.”

“Christopher Hitchens,” observed Cardinal Ravasi, “had chosen the first solution, denouncing religion as ‘the main source of hatred in this world.’”

Cardinal Ravasi hopes that the Courtyard of the Gentiles will be “a space open to the light in which they meet and clash – absurdity and mystery.”

As a “man of faith,” he always hopes “to see the young rebel turn towards the light and go up step by step to the ocean of love in which all the hatred in the world is immersed.”

His final hope for Christopher Hitchens was that “death was for him ‘a door that opens and breaks into the future,’” Cardinal Ravasi said, recalling the aphorism of the English writer Graham Greene, who said that death for him “would be like entering a new infancy.”

I keep encountering Greene these days. His literary work and perspective on the human condition are certainly engaging. Among many other things, I was struck by the way he sized up his own personal suffering by stating that ‘unfortunately, the disease is also one’s material.’  It reminds me of another writer years ago saying ‘everything is copy,’ which resonates as both true and keenly perceptive about how rich life is.

Which sort of gets back to the point here, speaking of Hitchens and perception and life.

Interestingly, one of his most significant opponents in the ensuing debate was his younger brother and fellow writer, Peter Hitchens, who penned the 2010 book “The Rage Against God.”

Both men had, in fact, started on the political far-left but later in life took very different intellectual paths.

“While I was making my gradual, hesitant way back to the altar-rail, my brother Christopher’s passion against God grew more virulent and confident,” wrote Peter earlier this year.

“As he has become more certain about the non-existence of God, I have become more convinced we cannot know such a thing in the way we know anything else, and so must choose whether to believe or not. I think it better by far to believe.”

Which reminds me of Pascal’s wager…