After the failure of talks between US president Donald Trump and North Korean leader Kim Jong-un and as the excitement about the prospect of a formal inter-Korean peace agreement has waned, a television series has focused on the ties that bind the two Koreas.

Crash Landing on You, the last episode of which aired in early February, achieved the highest ratings in the history of South Korean TV channel TVN and has caught the imagination of audiences wordwide.

The ambitious, cross-border storyline involves a wealthy South Korean heiress who accidentally paraglides onto the wrong side of the military demarcation line, where she meets and falls in love with a North Korean soldier. Their meeting sets the stage for a tale which continually references the complexity of the inter-Korean division.

Instead, it presents the audience with a strong but sensitive North Korean male lead and a career-driven but kindhearted female lead. Their story plays out both north and south of the border which divides the two countries, which remain officially at war.

North Korean escapees in South Korea have described the series as a fairly accurate representation of ordinary life in the north – including the local dialect, the availability of South Korean products in the markets, as well as the frequency of power blackouts, the prevalence of bribery and the privileged lives of the elite.

Will definitely have a hard time moving on from this drama. Thank you, Crash Landing on You, for the laughter, friendship, tears, and whole lot of love! ❤️ pic.twitter.com/nC2zsGLeTV— Kdrama Ramen (@kdramaramen) February 17, 2020

The drama has also been praised by North Korean escapee organisations in South Korea for breaking down stereotypes of North Korea and its people, whose image has long suffered as a result of inter-Korean tensions and a lack of positive cross-border, people-to-people contact.

The election of Moon in 2017 and his stated aim of working towards a formal peace agreement facilitated a new phase of inter-Korean rapprochement and several high-profile meetings between the leaders of the two Koreas and the United States in 2018-19. But the warm atmosphere of 2018 and hopes for greater inter-Korean engagement have since cooled, following the breakdown of US-North Korea negotiations on de-nuclearisation and the failure of South Korea to broker any further progress.

The inter-Korean division as a great tragedy and the unnatural situation on the peninsula is a theme that runs strongly throughout Crash Landing on You’s storyline. The love between the northerner and the southerner, seemingly destined to unite but kept apart by arbitrary forces beyond their control, mirrors the bitter narrative of the two Koreas, which has spanned more than 70 years. 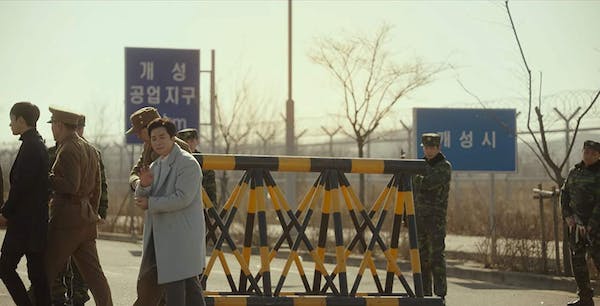 The 38th parallel which divides the two Koreas. Netflix

Viewers are reminded of the interminability of the Korean War when the central characters take refuge in an abandoned house within the demilitarised zone which still divides the peninsula. There they find a water bowl sitting atop a traditional Korean storage jar, which the North Koreans explain was left out as part of a shamanistic prayer ritual for a son sent to war between 1950 and 1953, in the hope of a return which never came.

The real-life representations in the script were aided by the work of assistant scriptwriter and North Korean escapee, Kwak Moon-Wan, who studied film in Pyongyang before coming to the South. Kwak told the BBC he was keen to avoid political controversy and unnecessary demonisation of the North Korean regime in his writing. The drama’s lead villain is therefore portrayed as being driven by his own corruption and personal vendetta, rather than acting on orders from higher up.

Yet in a poignant scene where an anguished North Korean officer confesses his guilt for aiding in the murder of an innocent man on orders from his superior, the officer laments: “If that’s my mission given by the country … don’t you think that’s too cruel?” The viewer also can’t help but note the fear surrounding mention of the North Korean Ministry of State Security, and the structures of surveillance that pervade daily life among the North Korean characters.

On the other side of the divide, South Korea is painted in a markedly more flattering light. Explicit reference to the comparative sophistication of all things southern – from fashion to the dialect – is frequent. When some of the northern characters find themselves in the South, their childlike wonder at the sheer abundance of apparent luxury is consistent with the southern view of their northern cousins as provincial and unworldly. 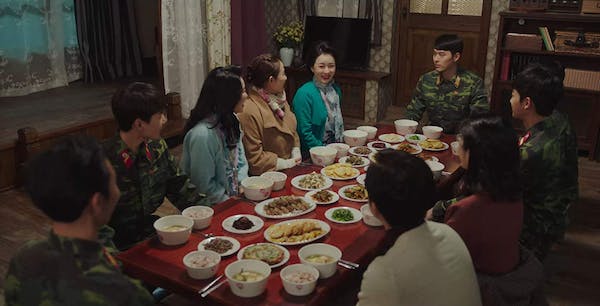 Tale of love and friendship across borders. Netflix

At other times, that provincial simplicity, manifested in a slower, low-tech pace of life in the North, as well as close appreciation of the seasons and of nature, is presented as a virtue lost in the hectic pace of the urban South.

Academic scholarship on the prospects for the future unification of the two Koreas has warned of the threat to North-South reconciliation posed by the sheer scale of the socio-cultural divide, which would take much more than a political agreement to overcome.

Through the re-framing of stereotypes, albeit with some creative licence, Crash Landing on You arguably humanises the North for its audience in ways that inter-Korean dialogue has not in recent years. Despite its soft-focus romanticisation of the political situation, Crash Landing on You brings the pain of the division to a personal level for a generation of Koreans who, unlike their grandparents, have no memory of what it was like to be a single nation.

While forays into such fraught territory in South Korean popular culture have had mixed results over the years, the success of this story suggests there is still room to explore new ways to reignite affection between the people of North and South Korea.

Sarah A. Son, Lecturer in Korean Studies, University of Sheffield.