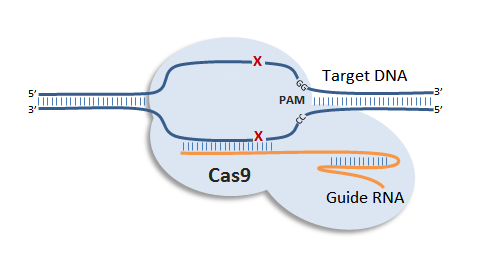 High on media lists of the top world-changing ideas of 2016 is CRISPR-Cas9.  You would be forgiven for not even knowing what it is, but apparently this new technology that makes it possible to quickly and easily edit DNA has the potential to change the future of food, and to a limited extent is already doing so.   The method could eventually be used to tweak almost anything we eat, selecting traits that can make agriculture more environmentally sustainable and productive, or the resulting food healthier.  Unlike the gene-editing processes that have gone before it which took weeks, months or even years to achieve less precise results, it is easy, quick and cheap.

CRISPR-Cas9 is undoubtedly a technology that could help achieve greater food security around the world (despite the reality that the world has enough food to go around and it is waste and unequal food distribution which is really the problem).  But you are not alone if you have an instinctive aversion to it.

The technology itself is based on a natural process and replicates how bacteria fight viruses.  By using guide RNA—the same type of molecule that bacteria use to find and fight a virus, but that can also easily be made in the lab from DNA in a few steps—scientists realized that they could target any spot in the genome of a plant or animal and make a deletion or paste something else in.  An infographic published this month in the Scientific American better explains the process here.

To name just a few, possible positive outcomes of the technology include:

– At DuPont, researchers are working on CRISPR/Cas9-edited versions of commodity crops such as corn, soybeans, canola, rice, and wheat which they expect to have on the market in 5 to 10 years. The plants have new traits like drought resistance and higher yields; qualities which could save farmers millions of dollars and create more food for those that go hungry.

– CRISPR may keep livestock healthier without relying on antibiotics, which are overused in animals and leading to antibiotic resistance that is killing humans. This is because you can harness CRISPR systems as antimicrobials.  One researcher comments “Whereas most classical antibiotics are very broad-spectrum—when you consume them they wipe out the good guys and the bad guys indiscriminately—CRISPR is opening new doors for programmable antibiotics whereby you could selectively eradicate a pathogenic species.”

– Some researchers are experimenting with directly editing livestock genes to help protect animals from disease.  For example, one pig disease costs farmers $600 million a year.  In 2015 researchers created a gene-edited version of pigs that couldn’t catch the illness. Twenty percent of all animals raised for food are lost to disease; a sustainability problem as well as a cause of animal suffering.

Seeing the immense benefits which could be achieved, is it really safe and good for humanity to mess with Mother Nature like this?   Apparently there is a general consensus in the scientific community that genetically modified crops increase yields and do not pose a threat to human health.  Some argue that we need to treat CRISPR not as a single technology, but as a toolbox full of technologies, each of which is specific to the mutation, organism and ecosystems in question.  Some uses might be morally ok; others might be highly unethical.

In an analysis of the psychology behind why people dislike GMOs, researchers have described transgenesis—the mixing of species—as something people find fundamentally unnatural (for example, inserting a fish gene into a tomato).  However, if CRISPR is used to insert genes from the same plant (or just to take a gene away), people are more open to that, and in some cases the technology simply replicates what a long period of breeding would have achieved anyway, but much more quickly.

Rachel Haurwitz, cofounder of Berkeley-based Caribou Biosciences which has created its own version of CRISPR, comments that:  “I think there’s real potential from a technology perspective… But I think that potential can only be realized if we the industry do a good job of communicating to the rest of the world how beneficial it will be for growers, for consumers . . . for everyone involved in the food value chain.“

Personally, my first reaction is to find this sort of technology unnatural and vaguely repellent.  My second reaction is to distrust humankind with this kind of power given our penchant for often doing the wrong thing, especially when considering its potential application to human embryos rather than the farm animals and food we are talking about in this case. (The Crispr technique was employed on human embryos for the first time in April 2015 by independent Chinese scientists and remains highly controversial. Their experiments were fraught with errors and blantantly disregarded the fact that they were playing with still tiny human babies – a horrific application of this technology.)

However, if this technology really is a toolbox which can be used in specific ways to achieve great good for people who currently go hungry when applied to animals and crops, then that good has to be balanced against the known risks and alternative options, if one has no other ethical or moral objections.  One alternative option is to simply focus on better food distribution and less waste.  One only hopes that we navigate the way forward with careful consideration, the right restrictions, and with respect for the good and dignity of all human life.  There is no merit in an attitude which desires the marching on of technology just to ‘see if we can do it’.