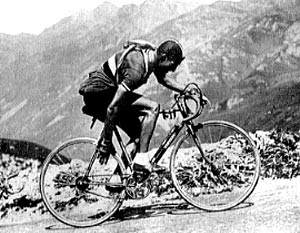 With the Tour de France just completed and the Olympics about to begin, many fans around the world are focused on sports celebrities and aspiring champions and stars all too often called heroes for excelling in athlethics. Let’s take a closer look at the true story of a man who deserves to be honored as all of the above.

I discovered it, thankfully, in the masterful book written by the brother sister team Andres and Aili McConnon, about the life and heroism of Gino Bartali.

Let your virtues expand to fill this sad situation: Glory ascends the heights by a precipitous path.

Who would have known of Hector, if Troy had been happy?

The road to valor is built by adversity.

What a perfect title, Road to Valor. Anybody fighting the terrain and sometimes hazardous racecourse and natural elements of the three weeks of the Tour or any other cycling championship achieves a certain level of command over adversity. But who has added to that the challenge of secretly saving endangered lives and escaping the dangers of detection except for Bartali?

What a story. The publicist release has to summarize a lot:

Set in Italy and France against the turbulent backdrop of an unforgiving sport and threatening politics, Road to Valor: A True Story of World War II Italy, the Nazis, and the Cyclist Who Inspired a Nation is the breathtaking account of one man’s unsung heroism and his resilience in the face of adversity…

At the age of 24, he stuns the world by winning his first tour de France and quickly becomes an international sports icon.

After Mussolini’s Fascists try to hijack Bartali’s victory for propaganda purposes and as the Nazis occupy Italy, Bartali, a devout Catholic, becomes involved in the Italian resistance and undertakes dangerous missions to help those being targeted. In addition to sheltering a family of four Jews in an apartment he financed with his cycling winnings, Bartali smuggles counterfeit identity documents past Fascist and Nazi checkpoints. Recognizing him simply as a national hero in training, the soldiers never suspect he’s hiding precious papers in the hollow frame of his bicycle, documents that helped save countless Jews hiding in Tuscany and Umbria from deportation to to work and death camps.

But that’s not all.

In 1948, the stakes are raised…Despite numerous setbacks and a legendary snowstorm in the Alps, the chain-smoking, Chianti-loving, 34-year-old underdog comes back and wins the most difficult endurance competition on earth.

Elie Wiesel recommends this gripping true account with these words:

‘Thou shall not stand idly by’ is a powerful Biblical command. In [the McConnon’s] book it offers a moving example of moral courage. A simple citizen and great athlete chose to oppose a cruel and racist political dictatorship by saving Jewish victims in Italy. Was it so hard to become a hero then? It was enough–enough to remain human.

Among many other accolades, Cardinal Timothy Dolan added this:

This book is a magnificent ride through the uphill-downhill-uphill story of Gino Bartali. It inspires anyone who tenaciously holds to doing what is just, no matter how difficult, in the face of ignorance and terror. Bartali is a hero for all times.

Having just followed most every stage of the 2012 Tour de France, and about to engage the 2012 Olympics, in the year when the freedom to exercise a religiously informed conscience about social justice is most seriously challenged, I really appreciate the fortifying story and the witness of Gino Bartali.