Korea has the
second-lowest birth rate in the world – so low that the government has reversed
years of pressure on couples to have just one or two children. It now
desperately wants to raise the birth rate. But why not reduce the abortion
rate, asks obstetrician and gynaecologist Anna Choi. Her lobby group, Gynob, has
created quite a stir with its demand that abortion be criminalised and
abortion doctors prosecuted. We interviewed Dr Choi via email. 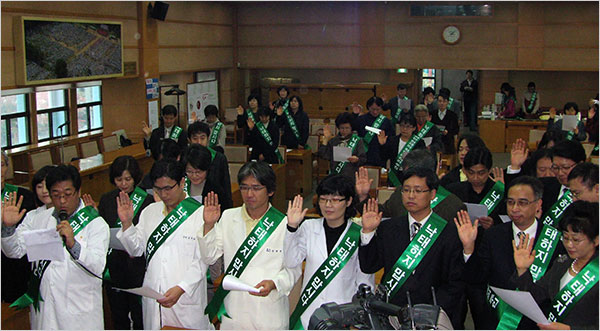 MercatorNet : The Korean government is very worried about
the fact that the national birth rate is almost the lowest in the world. What
is it doing to reverse this trend?

Anna Choi : The Korean
government drove a population control policy
from 1973 to recent years . Therefore,
the present fertile generation grew up in social circumstances where family
planning was encouraged. The problem of the low birth rate attracted serious
attention in recent years and so the government has changed its policy and is
encouraging a higher birth rate. However, a mere change in government policy cannot
affect Koreans’ negative views on child-bearing within a short span of time. In
other words, many people here still consider that raising many children can
only increase their financial costs and requires too much sacrifice on the part
of parents.

MercatorNet : How successful has your own group been in
lobbying the government and changing public opinion?

Anna Choi: Having been accustomed to family planning
policies for so long, the Korean government does not seem to appreciate the
logic and implications of our movement. The government says it will take a long
time to build up a social consensus for a new policy change. Such an easygoing
attitude will not decrease abortion and is irresponsible in view of the status
of abortion in Korea.

The government should adopt a
new policy to control abortion on a large scale and to provide government
assistance toward changing people’s awareness about a birth-friendly environment.
We are determined to push forward toward establishing new population policies.

MercatorNet : How long did you do abortions? Why did you
stop? How do you feel about the time you did abortions?

Anna Choi : I did abortions for 6 years after I opened my
own clinic. In Korea about 80 percent of ob/gyn clinics do abortions. At that
time I thought, “Nothing would change even if I don’t do any, as long as
everyone else is doing them.” I was forced to do abortions to keep the clinic
open.

In the beginning, I advised
abortion-requesting women to give birth and tried to convince them not to
abort. However, as time passed by, my efforts became perfunctory and I got
disappointed with myself for doing abortions without much reflection and I lost
confidence in myself as physician.

I stopped doing abortions,
because I felt terrible about aborting healthy unborn babies to make a profit ,
while at the same time I was also trying to help infertile people get pregnant.

MercatorNet : You have said that many Korean obstetricians
are reluctant to stop doing abortions for financial reasons? Is it really that
profitable?

Anna Choi : In Korea many ob/gyn clinics would be forced
to close without doing abortions, due to a compulsory and abysmally low
medical fee system. This is especially true for small-sized clinics.

MercatorNet : If doctors are compensated adequately for
their other work so that they don’t have to do abortions to break even, do you
think that the number of abortions will decline?

Anna Choi : If doctors who do not do abortions are better
off than those who do abortions, it will help decrease the number of abortions.
However, more importantly, we must decrease demand from women who want to have
abortions and the government must adopt new policies toward increasing the
population growth rate as soon as possible.

MercatorNet : More than 600 of your colleagues have joined
your association and vowed not to do abortions. Why? Is it because of their
religious convictions? Does that give you hope of changing the attitude of the
medical profession?

Anna Choi : No doctors choose to work in obstetrics and
gynaecology to do abortions. We hope our society will become a place where
people deliver babies instead of aborting them. We also hope we will be able to
run clinics without doing abortions. Religious beliefs have nothing to do with
our movement. We just insist we need to fulfil our duties as medical doctors.

MercatorNet : Abortion is seen differently in
Korea than in Western countries. Here most of its supporters regard it as an
issue of women’s rights. But in Korea, where it is still technically illegal, I
have the impression that abortion is more a matter of convenience and
lifestyle. What differences do you see?

Anna Choi: The abortion problem in Korea is very different
from that in other countries.

First of all, abortion is a crime
under the Crimes Act. In 1973, however, the Mother and Child Health Act was
enacted to support the government’s population control policy. This encouraged
abortions as a method of contraception. Most people in Korea are unaware that abortion is
illegal because the government is unwilling to enforce the criminal law.

Second, abortion has become
prevalent in Korea not to protect women’s rights but to suppress them. All the
responsibilities concerning contraception, birth and childrearing fall on
women. The message that Korean society sends women is that they should get an abortion
if they cannot deal with those responsibilities. Married women with economic
difficulties and women pregnant with deformed babies, as well as single
mothers, are, socially and psychologically, forced to get abortions. Therefore,
pregnant women’s motherhood and health are seriously threatened.

Third, I have heard that there
are few ob/gyn doctors who abortions overseas, even in countries where abortion
is legal, and they are stigmatised for not respecting the life of the unborn
child. The contrary is true in Korea. Korean ob/gyn doctors do abortions even
though they know that abortion is illegal. After announcing that members of our
group will do no more abortions, we have been harshly criticized by the public
and ob/gyn-related organizations for putting women who want abortions in
trouble.

MercatorNet : Estimates of the number of abortions in
Korea range from about 350,000 to 1.2 million each year, giving it a reputation
as a haven for abortions. In your experience, what percentage of women have
ever had an abortion?

Anna Choi: Government statistics in 2005 says 29.8 out of
1,000 fertile women get abortions, which is much higher than countries which
have no laws against abortion or where abortion is permitted.

From my own experience, I can
only guess many more than this figure get abortions, but no statistics are
available.

MercatorNet : Will your campaign succeed? How long will it
take?

Anna Choi : We consider that it has been a success in view
of the fact that ob/gyn doctors have publicly raised the issue and discussion
over abortion is openly going on for the first time in Korea, where nobody has ever
talked about the abortion issue. We have filed criminal accusations with the
Prosecutors Office to launch investigations into three abortion hospitals.

After our nation-wide campaign
began, many specialist abortion clinics have taken down their internet advertisements.
More people are using contraception since getting an abortion is not as easy as
it was before. Even the Ministry of Health, Welfare and Family Affairs recently
announced that it would file criminal charges against doctors who are found to
have committed abortion.

However, the government as
well as ob/gyn associations are reluctant to reverse their policies and practices. On the
contrary, some contend that abortion should be legalized and made free. If that
happens, abortion-practicing hospitals will enjoy increasing revenues while
hospitals which shun abortions will suffer. Accordingly, some enthusiastic
participants in the anti-abortion movement are beginning to fade away.

The key issue here is the
attitude of the Korean government. Unless the Ministry of Health returns to the
principles enunciated in the Criminal Act and supports the pro-life movement,
the anti-abortion movement is bound to fail.

But the Korean government
should remember a few simple facts:

* Our birth rate has continuously
fallen down and will hit negative growth by 2014.

* Because of the prevailing
male preference tradition in Korea, the abortion rate is much higher for girls.
Accordingly, importing women from neighboring Asian countries for marriage has
been necessary. This trend started in the late 1990s and the total number of
imported wives will reach about 250,000 by the end of 2010.

* Unless abortions stop,
Korean society will be disoriented in every aspect of life. For example, the
number of mixed-race Koreans will exceed one million in just a few years. This
will be a huge change in our society, one for which we may not be prepared.

none More by Anna Choi