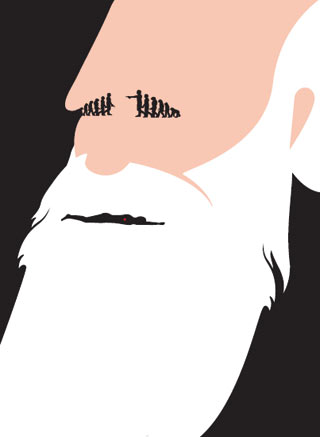 2008 marks the
bicentenary of Charles Darwin’s birth in 1808 and the
sesquicentenary of the publication of On
the Origin of Species in 1858. Around
the world commemorations and festivals and seminars are scheduled. A
torrent of features is gushing through the popular press, as well,
about the man who may have been the most influential intellectual of
the last 150 years.

Despite the
euphoria, it was still surprising to see that The
Economist, the world’s most
influential news magazine, has marked the event by adopting Darwinism
as its official ideology. After promoting evolution sotto
voce for many years, it burst out of the closet in
its special Christmas issue and declared that Darwinism can explain everything
about human nature.

Well, for such an
erudite publication, it’s embarrassingly naïve, but, Yes,
everything. For too long, The Economist
says, Darwin has been on the nose because eugenicists, racists and
“social Darwinists” claimed to have been inspired by him. But
recent research has shown just how powerful his ideas still are: “Man
is an evolved species. His behaviour makes no sense unless its
evolution is comprehended.”

Highlighted by The
Economist is a very broad range of nice
and nasty human activity: music, murder, shopping, health, date rape,
baby killing, a sense of justice, the gender gap in pay, racism,
obesity, and even language (which evolved from mutual grooming). Its
leading article, with the revealing headline, “Why we are, as
we are”, concludes with a cursory curtsey to humility: “No one is
suggesting Darwinism has all the answers to social questions.”

Well, you could have
fooled me. In fact, The Economist’s
contention
is that all
social policy ought to be framed in evolutionary terms. Otherwise, it
is destined to fail. Traditionally, policy has been shaped by
philosophy, sociology or even religion. But these are inadequate
tools, it says:

“They
describe, rather than explain. They do not get to the nitty-gritty of
what it truly is to be human. Policy based on them does not work.
This is because they ignore the forces that made people what they
are: the forces of evolution.”

Welcome to social
Darwinism 2.0. SocDar 1.0 used the ideas of natural selection and
survival of the fittest to promote racism, eugenics, and robber baron
capitalism. What fearsome ideas will emerge from 2.0?

The problem with Darwinism
of any hue, at least when applied to society, is that its enthusiasts
can cook up an explanation for everything in terms of survival and
reproduction, the two pillars of Darwin’s theory. Whatever exists
must somehow be necessary for survival, no matter how debased it may
seem in old-fashioned moral terms.

This leads to some
sticky problems. One of these, for instance, is genocide. Since it
exists, it must confer an evolutionary advantage — which is about as
close as Darwinism gets to the old-fashioned notion of ethical
goodness. Some evolutionary theorists even think that humans are
programmed for genocide and war. Indeed, the old man himself seems to
have thought genocide something between a jolly good thing and a
regrettable necessity. As he wrote in his other great text, The
Descent of Man and Selection in Relation to Sex:
“At some future period, not very distant as measured by centuries,
the civilised races of man will almost certainly exterminate, and
replace, the savage races throughout the world.”

The racism in The
Descent of Man is shocking to a modern
reader, but it hardly raised eyebrows amongst Darwin’s colleagues.
“Civilised races can certainly resist changes of all kinds far
better than savages,” said Darwin dismissively of the
aboriginal Tasmanians who had all died of disease, warfare and
ill-treatment within a few years of European settlement of
Australia. The
Economist’s updated Darwinism may
someday sound just as brutally cynical.

And as naïve. While
evolutionary thought may shed some light upon why young men commit
more murders than any other age group, the far more interesting
question is why most of them do not. Human consciousness clearly
indicates that man has a spiritual dimension which is not determined
by the iron law of survival of the fittest. Even some of the more
intelligent Darwinists acknowledge this.

By way of example, The Economist
was not the only publication to celebrate in December. The
Lancet, one of the world’s premier
medical journals, had a special issue on Darwin’s influence – and
its editor poured scorn on vulgar popularisations of Darwin’s
theories. He must have had The Economist
in mind.

Many non-biologists, wrote
Steve
Jones, a leading British scholar of Darwin — and 2006 Secularist
of the Year — “are convinced that Darwin’s science is a
universal solvent that can sort out the most recalcitrant problems of
society, consciousness, politics, literature, and more. They mislead
themselves.” And, he continued, “The most important talent for a
Darwinian is to know where his subject stops. Many pan-Darwinians,
alas, fail to realise that central fact.”

Michael Cook is editor
of MercatorNet