This is part of a Tiger Print series on the dating culture.

It’s no secret that I am a Twilight fan. It’s not great literature, but the books are catchy. But I do have a problem with the thing I have dubbed ‘The Twilight Myth.’ This myth, which is being mistakenly accepted by so many teenagers and young adults, goes like this: You and your boyfriend have enough willpower to sleep together nightly and nothing will happen. You both will remain chaste and virtuous while being wrapped in the other’s arms for long hours at a time. How romantic.

With just a little knowledge of human nature, a rational person would be able to recognize that this is highly unlikely to be true. In fact, it might be impossible.

The idea started in the first Twilight book. Edward, the perfect vampire boyfriend, spent many nights outside Bella’s room watching her sleep. Once Edward and Bella begin dating, he stays over – every night. She sleeps he stays awake in her room. Or sometimes they are over at his place, but same scenario. Sure, in order to clear the air they talk about remaining chaste and not having sex – something that Edward wants infinitely more than Bella does. And they have a couple moments where is seems they might cross that boundary, but they don’t because Edward is honorable. They wait till they are married (Book 4). 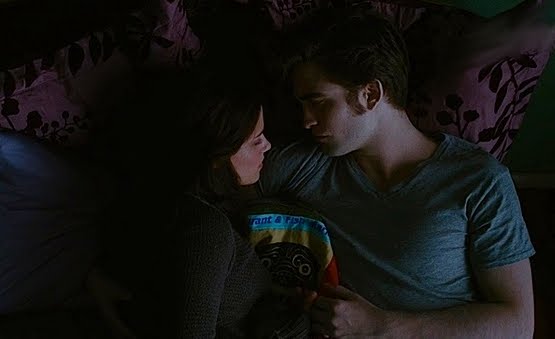 But this is fiction. The characters can do whatever the author wants them to do. Edward can remain perfectly honorable for two years despite is constant yearning. But if this were reality, the ending would have likely been very different.

Unfortunately, many girls and young women today are looking for that Edward – the guy who will love her passionately with everything he has and love her enough to keep them both virtuous. Guys are even susceptible to it – or at least pretend to be. For instance, a friend of mine was recently asked by the guy she was seeing if she wanted to sleep over at his apartment. When she responded that she wasn’t going to be having sex with him, he corrected her saying he wasn’t interested in sex yet. He just wanted to literally sleep with her, promising nothing would happen. He’d be good and she was already good, so it wouldn’t be a problem.

Whether that was just a line he pulled or the way he actually thought, it further proves the Twilight Myth has firmly planted itself in the current dating culture. We need to remove this idea from society that a person’s will can always be strong enough to overcome temptation and passion.