One year after the infamous “Unite the Right” rally in Charlottesville, we hear about the “Alt-Right” less frequently, but white identity politics still has a constituency in America (and other parts of the world). How large is it, and, apart from racism, what other sentiments do these people share? Also, what demographic characteristics do they have in common?

A new report from the Institute for Family Studies, authored by University of Alabama political science professor George Hawley, provides some answers that put this group in perspective and indicate how its insecurities can be combatted.

Studying this group is not easy since it is amorphous and most of its activity takes place on the internet, often under pseudonyms. However, its followers tend to share three main sentiments: 1) a strong sense of white identity, 2) a belief in the importance of white solidarity, and 3) a sense of white victimization; the 2016 American National Election Survey (ANES), which was conducted during President Donald Trump's election campaign, included helpful questions about these attitudes.

Hawley adapted the ANES questions to measure the strength of each sentiment (high or low). He reports:

The survey included 3,038 non-Hispanic white respondents. Among these respondents, only a minority expressed high values on any of the above questions; about 28% expressed strong feelings of white identity; about 38% expressed strong feelings of white solidarity; and about 27% felt that whites suffer a meaningful amount of discrimination in American life. A much smaller minority, about 6% of respondents, expressed all three opinions. It is worth noting that a 2017Washington Post-ABC News poll estimated that about 10% of respondents supported the Alt-Right.

So there’s one answer: the core Alt-Right – those with strong white identity, solidarity and feelings of discrimination — is not that big.

And their demographics do not present a clear profile. 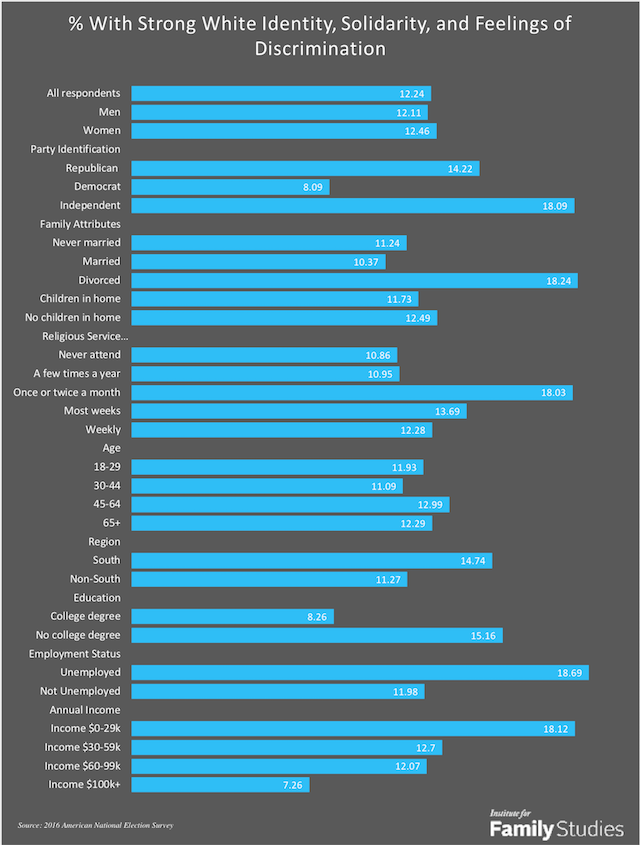 Religious practices “have a negligible effect” on their racial attitudes, Hawley finds:

“The rise of secularism in the electorate will have important political implications, but its impact on race relations may be insignificant.”

Marriage and family status are not significant markers either, with the exception of divorce:

“Never-married and currently-married respondents were not significantly different from each other, but divorce does seem to increase the likelihood that the respondent will believe whites suffer discrimination and the likelihood that a white person will agree with all three of the basic premises of white identity politics. Therefore, if we wish to discourage right-wing radicalism, encouraging more marriage will likely not be effective, but strengthening marriages and discouraging marriage dissolution may be helpful.”

“It turns out that economic variables are some of the stronger determinants of white attitudes on racial questions. Higher incomes are associated with lower levels of white racial identity, racial solidarity, and feelings of discrimination. A college degree is a statistically significant and substantively important variable. This suggests increased education is one of the more effective tools for combatting dangerous ideologies.”

Hawley concludes that his data provides “no single measure that can predict which white Americans will have the attitudes that form the basis of white identity politics.” However, he has a couple of caveats.

First, survey data can be skewed by social desirability bias – respondents not telling the truth about their attitude, given – in this case – the stigma attached to racism:

“In this case, it is possible that wealthier and better-educated respondents were simply more likely to lie about their real attitudes.”

Secondly, people who have a strong sense of white identity and racial grievance are not necessarily involved with radical movements.

“Therefore, the demographics of people who are active in the Alt-Right or related white nationalist movements may be different from what we see above. In fact, given that men are the overwhelming majority of the Alt-Right's public supporters, and women actually scored slightly higher than men on these measures, this is almost certainly the case.”

Not surprisingly it seems that education, employment and support for married couples are a large part of the answer to racial and social tensions.

Research Brief: The Demography of the Alt-Right

Correction: This article has been updated in line with a correction to the original IFS report: 6%, not 12% of the survey group held strong opinions on all three measures of white identity politics.