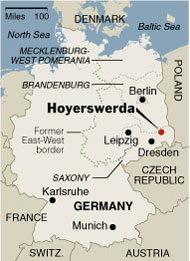 In the good old days of the German Democratic Republic, aka East Germany, Hoyerswerda was a model industrial town with about 80,000 inhabitants. It had the highest birthrate in the East. After reunification, things changed. The population fell by half. The average age increased from 35 in 1989 to 48.

“Every time I visit my parents and I drive through Hoyerswerda, there’s every time a new house that’s torn down,” says 24-year-old Judika Zirzow, a German woman who now works in a bank in Karlruhe. “The face of Hoyerswerda is different… It’s sad to think that if I have children, I could never tell them, ‘Here’s where I grew up.”

Very different. Instead of urban sprawl, the city government has to deal with urban shrinkage. It is demolishing apartment buildings. In a city that once had 21,000 apartments, 7,500 have been torn down and 2,000 more are scheduled for demolition. Young people returning to see their parents find that whole blocks have become vacant lots. According to an article in the New York Times:

"Emptiness is the reigning feeling when walking through the city, which has lost more than 40 percent of its residents since the fall of the wall, with the population dropping below 40,000 people from more than 70,000."

In the years after the collapse of Communism, birth rates in East Germany plummeted, hitting an incredible low point of 0.77 in 1994. “For a number of years East Germans just stopped having children,” according to Reiner Klingholz, director of the Berlin Institute for Population and Development. Now birthrates have bounced back and are much the same throughout the country — which are still amongst the lowest in the world.

While depopulation is bad news for the German people, it may be good news for German animals. Wolves are making a comeback around Hoyerswerda. According to Der Spiegel,

"But for five years now, the wolf population has been establishing a solid foothold in the country. And now, they are set to expand throughout Germany's east… "We have more wolves living in Germany right now than we have had in 200 years," [says one expert]"