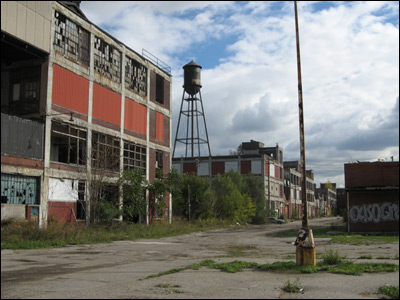 A few days ago we received the news that the largest municipal bankruptcy in American history was about to occur: Detroit. Since then, it seems as if announcing that you have no money to fund your billions of dollars of debt is unconstitutional: a somewhat bizarre decision it seems disconnected from reality. (Although that has now been overturned on appeal I see)

But the decline of Detroit has been noticed for some time now – on this blog we have mentioned the city’s difficulties on a few occasions, here and here and here. This was not an unforeseen, sudden decline brought on by war, plague or famine. Instead, Detroit has suffered from a decades-long malaise: industry (particularly automotive) moving to cheaper locations elsewhere in the USA, or being undercut by foreign competition; population decline; neighbourhoods being boarded up; crime rates soaring; large public service bills etc etc. Indeed, I was watching a classic move the other night: Beverly Hills Cop and I noticed that the start of the movie is set and filmed in Detroit. The movie is over thirty years’ old, but the Detroit scenes were full of dereliction and abandoned buildings. Foreshadowing evidence of Detroit’s continued decline was visible even back then. (Great movie by the way – the eighties had such a string of them: Beverly Hills Cop; Star Wars V and VI; India Jones I-III; Labyrinth; Blues Brothers; Ghost Busters etc etc)

As you may be aware, the facts of Detroit’s situation are appalling. The population is now down to 700,000 a decline of over 32% between 1990 and 2012. This of course means that there are many, many abandoned neighbourhoods where one cannot give houses away. This is particularly a problem in a city that is extremely spread out – apparently Paris could fit within the area of Detroit that is vacant!

Although people are blaming different things for Detroit’s failure (overpaid and inflexible unions and poor political management vs vagaries of unrestrained capitalism and institutional racism) depending on their political persuasion, the situation is at least exacerbated (if not caused) by the steep decline in population. Can we use Detroit as an example of what population decline will look like in other cities as birth rates stay low in countries such as Germany, Italy and Japan? Housing stock unused, vast areas of urban space containing fewer people, the higher cost and decreased efficiency of public service etc etc?

At least one thing we can say is that paying for current spending through debt that requires an increasing future population to fund is a risky business.  Such an economic course may have worked in the last 60-70 years but when the population stops growing (or even starts to decline) then you are condemning the future generations to a large debt burden in order to fund your current lifestyle: whether it is basic services; large pensions/public service wages; or tax cuts.

I’m not saying that gearing our economy along the lines of a Ponzi scheme that relies on roping in more and more future rate and taxpayers is necessarily a good idea; just that if we want to continue to follow the current economic path we’re going to have to realise that it depends on us increasing our taxpayer base in the future OR subjecting that base to a much higher rate of taxation. OR we get used to the idea of a lower standard of living.

Detroit thought it could continue to spend vast amounts of money more than it brought in (through taxes etc) through debt funding. Unfortunately you need to either pay for your debt eventually or go bankrupt. Detroit is an example of this. Will other cities (and perhaps countries) follow suit? Let’s hope not…