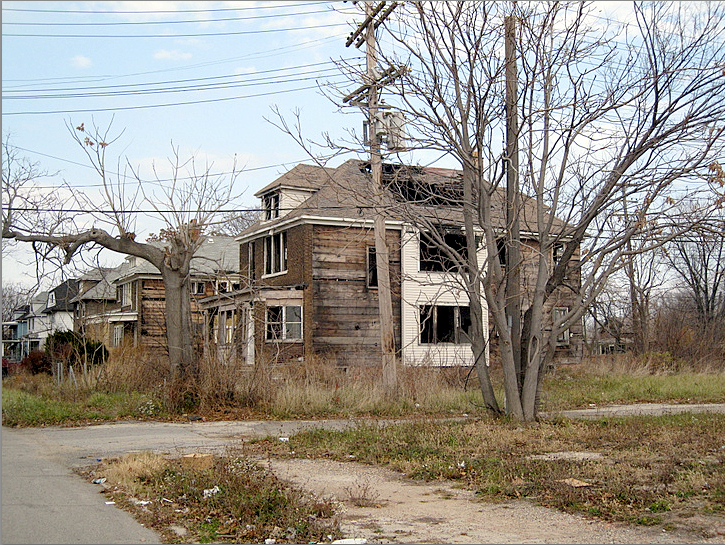 Wow, so I (and the rest of the country) have had a week to recover from the massive scare that we all got on Sunday night.  New Zealand hung onto a one point lead until the end to win the 2011 Rugby World Cup Final against France.  The result was greeted mainly with relief, we have seen the French knock New Zealand out of the 1999 and 2007 World Cups already, so we all knew that they had form when it comes to spoiling an All Blacks party!! So well done France and New Zealand for a fantastically gripping final and well done to the organisers for a brilliantly managed tournament.

So, what do I do with my life now?  I suppose the only thing to keep me occupied now is Detroit. Yes, Detroit. Incredibly, the latest US Census shows that in the last ten years, Detroit has lost 25% of its population. This is, according to the Economist, “a demographic catastrophe (New Orleans apart) without parallel in the developed world”.   With such a steep population decline, there are numerous problems, either resulting from, or contributing to, this demographic collapse:

“There are now about 60,000 empty houses in Detroit…Vacant properties are magnets for crime, and once one house in a block has been vandalised, and often set alight, the problem tends to spread. As property prices in the city collapse, so too does the rate-base that is used to collect the taxes that go to pay for schools; so the schools decline too, encouraging yet more people to move across “8 Mile”, the road that marks the city’s main northern limit, or to plusher suburbs like Dearborn to the west or Grosse Pointe to the east. Those who are left are likely to be the poorest, least-skilled and so least mobile. Only 11% of Detroiters aged between 25 and 34 has a college degree; in Seattle, the equivalent figure is 63%. Around 50% of the city’s adult black males are unemployed, and 38% of all Detroiters live below the poverty line.”

While the population and rate base has collapsed, the city’s costs have remained high because the city has remained the same size, thus “imposing most of the same requirements of road maintenance, street lighting, rubbish collection and emergency-service response times”.  These costs are exacerbated by the fact that Detroit is a massive city – 139 square miles is the area of the city itself (not the wider metropolitan area) – a larger area that Miami, Minneapolis and San Francisco combined!

Mr Bing, Detroit’s mayor, seems to have some sensible ideas on focussing on parts of the city, but that of course raises the issue of what happens to the areas that are deemed not worth spending money on.  Furthermore, the mayor is broke (decreasing rate revenue doesn’t help) and the state authorities are unable to provide much assistance.

However, the Economist does point to some budding, but still fragile, green shoots in Detroit, mainly due to the extremely cheap property prices which are drawing entrepreneurial types to the city.  Office space can be got for $10 a square foot in downtown Detroit, while “[y]ou can buy yourself a vast Victorian town-house in a perfectly pleasant area like English Village for $100,000, or a loft in somewhere a bit edgier like Corktown for considerably less.”  Furthermore, the schools in Detroit are gradually getting better, apparently in large part to philanthropic organisations.  Thanks to the growth in independent charter schools, religious foundations and rules that let pupils attend schools other than in their own suburbs, half of Detroit’s children now “escape the poorly run and poorly funded public schools”. Hopefully these green shoots continue and the city can get moving (and growing) again.  As Mr Bing says, the single most important thing is to get the economy moving again, so that tax revenues can recover and many other things become possible.

The experience of Detroit and the problems that it now faces now should be instructive for the rest of the developed world.  In the coming decades, as countries populations decline, will other cities face similar problems – shrinking tax (or rates) bases, climbing costs and declining economies?  Will these cities be able to revitalise themselves as Detroit is hopefully managing? Or will we have to accept that many of the services that we currently take for granted are not sustainable in a shrinking population and economic base?