Remember Robert Putman and Bowling Alone – his famous 2000 book on the decline of in-person social interaction in the United States? It really struck a chord and got academics and other worthies talking about “social capital”, or the value added to society by people getting together in everything from bowling clubs to political parties.

But in the decade or so since then it seems that things have only got worse. Not only do people not join the Kiwanis or go to church as they used to; many of us are eating alone. New research reported by Market Watch finds that 57 percent of meals in the US are eaten by solo diners and family mealtimes are slowly disappearing.

Since meals are prime social opportunities — for relaxation and family solidarity, for sharing good ideas and values, for getting to know friends better, finding new friends – dining alone is a dismal trend. It could be a reason for the epidemics of obesity and mental illness that Western societies are facing. Eating with others around the table, especially at home, tends to foster good nutrition and moderation.

Perhaps, though, the picture is not as bad as it sounds. Half of all families still eat together and 28 percent do so four or five times a week, a recent Gallup poll found. But those figures have remained fairly steady over the past 15 years, and there are fewer family households. And while the figure for solo meals falls to 34 percent at dinner time, that’s still one in every three persons eating their instant meal in front of the TV or at the local pizza joint.

Boosting the figures for dining alone are the other two meals of the day, breakfast and lunch. Breakfast is eaten alone 61 percent of the time and lunch 55 percent. As someone whose co-resident family consists of one person with a different daily schedule to mine, I would be in those statistics quite often, and I imagine many commuters get their breakfast on the run. “Breakfast menus are the only growth area on fast-food and casual dining menus, studies show,” reports Market Watch.

Then there are the workers who eat lunch at their desk – whether to get through the work or to avoid other people, we don’t know. The computer screen provides a great cover for the anti-social. Either way it’s not a good habit.

One of the big drivers of dining alone is a dramatic increase in the number of single-person households – from 10 percent of US households in 1970 to over 27 percent in 2012. And the size of the average household has shrunk from 3.1 to 2.6. Factors in this include the delay in marrying and starting a family, and the ageing Baby Boomers living alone through death or divorce.

Unmarried Millennials, unless they are living with their parents (and perhaps even then), are probably eating alone quite often, even when sharing accommodation with other people. If they are working they may face long commutes and long hours at the workface. US workers tend to work more hours than their European counterparts.

Since restaurants are struggling to attract customers in the wake of the recession, it is likely that, if young singles go out to eat at the end of the day it’s to grab a fast meal or take-out – a sector which is growing. This is probably not a great way to prepare for marriage and family life and could be corrected by committing to meals with flatmates at least two or three times a week. Not so long ago TVNZ featured a all-girl flat in Dunedin, a university city, where they ate together every day.

It’s my guess that a lot of the solo dining is not from preference, though there are people who seem to prefer to eat alone. They arrive at the café or the fast-food eatery armed with their mobile phone or commandeer the daily newspaper provided there and proceed to bury their noses in it. (I’ve done it myself while having a breakfast coffee on the run.) Sophisticates might bring a book or e-reader. It’s worth trying to get behind their defence system and see if they really would like to talk.

That still leaves serious dining, and singles with good taste and big salaries burning a hole in their pocket but few friends they want to spend it on. For them restaurants are making a special bid, according to a recent BBC online report.

Ottawa restaurateur Stephen Beckta tells the Beeb that fine dining establishments should see a solo diner as “the greatest compliment a restaurant can receive”. He adds, “Solo diners choose to eat with us for the pleasure of dining – not because they were roped into a celebration or a date – so why would we not embrace them?” His solos can have a bit of conversation at the bar and staff will have a good chat with them – or leave them to their own thoughts (of the next delicious course) if that’s what they want. At a San Diego restaurant they can be entertained by sitting at the bar and watching chefs perform their culinary feats.

All very nice, I am sure, but isn’t there something slightly sad, if not disturbing about such calculated and finely tuned self-indulgence? 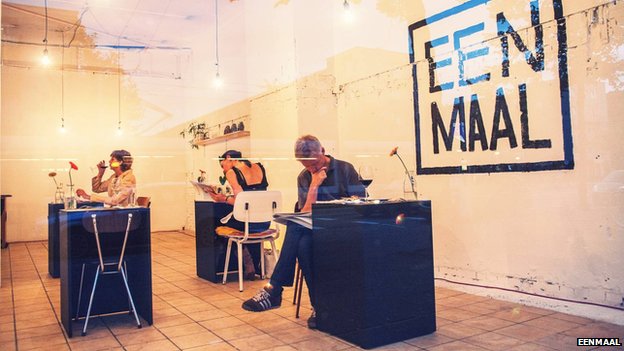 And what are we to make of Eemaal, a restaurant in Amsterdam which, strictly for the Greta Garbo types, features only tables for one and has been fully booked every night since opening a year ago. Designer Marina Van Goor says, “I wanted to create an attractive place where disconnection is okay, especially in our hyper-connected society. I chose to set up a restaurant, because eating alone is the most extreme form of feeling disconnected in our culture.”

She is surely right about that, but feeling disconnected together? Does that make sense?

Market Watch quotes Susan Cain, champion of introverts, who thinks it does. She says, “One of the much unheralded pleasures of café life is the ability to be alone together.”

It seems to me more a way of masking your aloneness or anti-social bent. There may be times when dining out alone is unavoidable, but the few times I have done it I have more often than not found people ready to talk. Many cafes now have a big table that, if not occupied by a large group, can facilitate contact between solos.

It is certainly healthy to be alone at times, and even “alone together” (reading, absorbed in a movie or concert, praying quietly in a church), but eating and drinking side by side with people without bothering to engage with them, as a regular thing, seems a tad lazy, or even pathological. It’s just squandering a chance to build social capital.