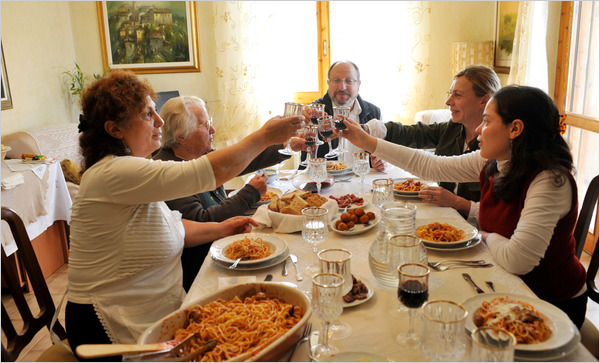 An Italian family at home. Picture: Chris Warde-Jones for The New York Times

Italians are, famously, attached to their family, and the European economic crisis affecting their country has given them even more reason to turn to home for support. Recent research shows that a third of adult Italians – and more than 60 percent of young adults – live with their parents. Families in Greece, Spain and other parts of Europe — and even further afield — are also likely to be seeing more of each other these days.

“In these times of Europe’s public stress and crisis when the public sphere becomes unbearable, the home assumes a vital role in the life of citizens and families as a place where individuals can be nurtured,” says hospitality expert Anne Zahra. The modern market economy undervalues the home, she points out, and this is one of the chief contributors to the problems in Europe.

Dr Zahra, a senior lecturer in tourism and hospitality management at the University of Waikato (New Zealand), is the organiser of a three-day conference on this issue to be held next week in Rome. Home and Identity: The public-private nexus is a collaborative effort between her university and Roma Tre University, together with Fondazione Oikia and the Home Renaissance Foundation. The conference, following up previous work by Home Renaissance, will look at ways to bring the home and its vital social role into academic realm and public policy.

The media could also be more help. The New York Times, for instance, has no department or blog focusing on the domestic sphere as such. The home finds its place in the Fashion and Style section as half of the duo, “Home and Garden”, as though décor and family dinners were equally important. Other aspects of home are found in blogs on motherhood and ageing parents under the heading of Health, Family and Education. Home as the place where cultures and societies are made or broken is elusive.

“The home is not recognised in Government policy, in economics, in law, in media and in academic circles such as sociology and public policy,” says Dr Zahra “There is work on violence and abuse in the home but not the value of the home in positive terms. The purpose of this conference is to start discussing this in academic fields, drawing from a number of disciplines. The conference focuses on developing interdisciplinary academic debate where we can start investigating the importance of the home and its contribution and value to society.

A keynote speaker is French sociologist Jean-Claude Kaufmann of the National Centre for Scientific Research at the University of Paris Descartes. His topic, “Home of Little Happiness”, reflects his many explorations of domestic life and questions of identity. Professor Kaufmann is the author of books on, among other things, the new trend of single woman, the meaning of cooking, and what the contents of women’s handbags reveal — in Le sac: Un petit monde d’amour.

This is not, however, just a conference about women and their changing role. “Definitely not,” says Dr Zahra. “It’s more looking at the philosophical, sociological and economic dimensions of the home and the role of both men and women in the home, their contribution to the home. There are a number of presentations by male academics who emphasize the role of men in the home.”

Whereas previous conferences aimed to act as catalysts to see the home discussed, “this one is research-based with strong philosophical underpinnings. It is aimed at fostering research in the silent spaces of the home and its role and contribution to society.”

Perhaps Tony Blair’s proposal for a European President is one of the solutions to the debt crisis in that part of the world. But without recognising the role of the basic cell of society and nurturing it, such high-level manoeuvres seem doomed to failure.

What: Home and identity: the public-private nexus
Where: Rome, University of Roma Tre
When: November 14-17
Email: press@homerenaissancefoundation.org