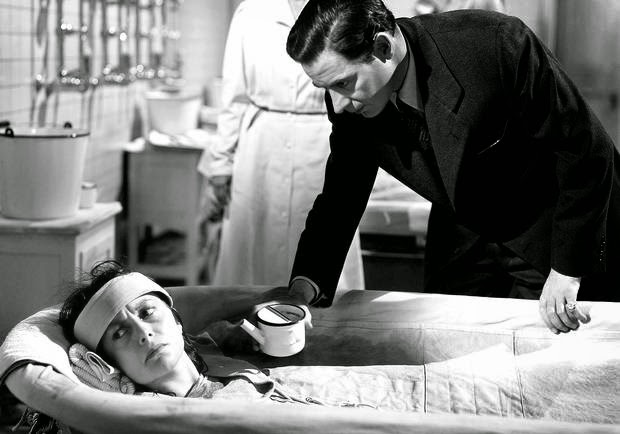 An unfriendly nurse orders the gown-clothed patient to climb onto the gurney.  Beside the gurney on a table stands an ominous-looking black box with dials and switches, and a cable running from it to a two-armed thing that looks like the doctor’s end of a stethoscope.  Only instead of earplugs, it’s got two cloth-covered steel electrodes.  The patient lies on the table and two other nurses stand next to her, ready to hold her down.  You see a close-up of a jar of greasy stuff that the head nurse applies to the patient’s temples.  Then the scene cuts to the black box as the nurse throws the switch.

The film “The Snake Pit” (1948) stars Olivia DeHavilland as Virginia Cunningham, a patient in a mental hospital, and was based on memoirs by a former mental patient.  The black box, of course, is an electroconvulsive therapy (ECT) machine, which was one of the few effective treatments known in 1948 for severe depression.  A current passes through the brain that is large enough to induce an epileptic seizure, and in enough cases to be useful, the resulting massive reorganizing of neural behavior can improve the patient’s condition.  But the treatment has frequent and serious side effects, including confusion and memory loss.

Somehow I don’t think too many people who currently practice a much milder version of the same thing—transcranial direct current stimulation, or tDCS—have seen “The Snake Pit.”  The process of tDCS consists of sending no more than a couple of milliamperes of current through one’s head with electrodes that can be placed in different areas, depending on what you want to do to your brain.  The simplicity of the equipment (the whole thing can run on a nine-volt battery) and the expense of conventional medical treatment for conditions such as depression, anxiety, or ADHD (attention-deficit hyperactivity disorder) has created a small but active cadre of do-it-yourself tDCS users.  And a market for commercially made devices has come about to serve them as well.

In a recent New York Times article, Anna Wexler, a Ph. D. student at MIT, noted that the medical journal Annals of Neurology published an open letter addressed to tDCS “amateurs,” as you might call them.  Somewhat surprisingly, the medical folks didn’t come out with guns blazing and condemn all non-professionally-authorized use.  Instead, they rather mildly warned about some of the known hazards (mainly skin irritation) and said that the effects of tDCS can be long-lasting and unpredictable.

I have a confession to make.  One day in my garage lab, back when I was in high school, I made a pulse circuit that put out about 10 volts, and out of curiosity more than anything else, I took the two wires coming out of the circuit and touched them to my sweaty temples (the room wasn’t air conditioned and this was summertime in Fort Worth, Texas).  I was rewarded with what is called a “phosphene” flashing in time with the pulses. A phosphene is a kind of visual hallucination arising from direct stimulation of nerves associated with vision.  After that, I decided I liked my brain the way it was, and didn’t fool with tDCS anymore.  But I can vouch for the simplicity of the equipment, at any rate.

In her editorial, Wexler praises the doctors for extending an olive branch, as it were, to the do-it-yourselfers, at least those who happen to read Annals of Neurology.  Somehow I don’t expect that’s too many people.  But speaking more generally, there is a moral issue here about the high cost of medical care and the things people will do who simply can’t afford conventional treatments.

People who are ill are by definition vulnerable, and deserve to be treated with respect, in both senses of the word:  treated medically, and treated as a fellow human being in need.  Before the age of modern scientific medicine, everyone was pretty much in the same leaky boat medically.  Hardly any medical treatments did any good, and so even the rich folks who could afford expensive so-called doctors didn’t get much in the way of real help from the medical profession.  But with the huge advances that scientific medicine has made in the last century, we can now defeat entire diseases such as smallpox and do a great deal to prevent or alleviate others.  All these advances come at a price, however.  And the big question now is, who pays the price?

There are two extremes in the approach to funding medical care, and most countries fall somewhere in between the two extremes.  At one extreme is the on-your-own approach. Countries that are too dysfunctional to have anything resembling a government fall into this category.  If you have enough money and can afford to travel and pay for medical care, you get it.  Otherwise, you’re out of luck.  At the other extreme is the single-payer government-does-it-all approach.  I am told that Cuba does something along these lines.  Maybe a few people have made a trip to Cuba just for the medical care, but not many.  Less extreme and more functional is the government-run medical system in Canada, which treats medical care as simply something that every Canadian has a right to.  In the nature of things, this leads to some sort of rationing.  Even if Canadians had a lot of gripes about their system, they are probably too polite to air them in public so that we in the U. S. can hear.

And then there is our crazy patchwork of Federal, state, local, private, and charity-provided medical care here in the US, augmented  since 2010 by the Affordable Care Act.  I have seen some reports that some of the “exchanges” set up by ACA are in deep financial trouble.  But believing that our present Congress will pull itself together long enough to make sensible improvements to that legislation takes an act of imagination that I am presently incapable of—without tDCS, anyway.

If anybody reading this blog gets the idea to try tDCS, please don’t do it on my account.  My brief encounter with it all those years ago made me decide to leave it alone, and I don’t want to be responsible for any negative consequences arising from reading an ethics blog.  On the other hand, if anyone reading this has used tDCS and think it works, it would be interesting to hear from you.  Bearing in mind, of course, that it affects everybody differently, so if someone writes in saying their headaches were cured by tDCS, don’t the rest of you headache sufferers get your hopes up.

You can read more about “The Snake Pit” at its IMDB site.