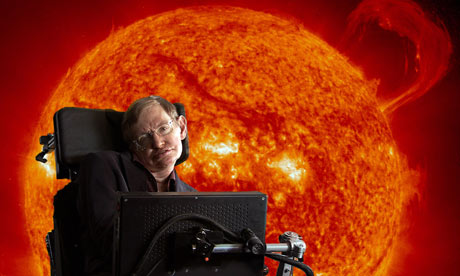 It is
difficult to argue with the world’s best-recognized cosmological
scientist, Stephen Hawking, a man who has lived with death for 49 years,
when he tells The Guardian: “There is no heaven
or afterlife for broken down computers; that is a fairy story for
people afraid of the dark.” (15 May 2011) It’s too personal with him.
But we might ask why do other intelligent people believe the opposite — that physical
death does not end all?

American commentator Dinesh D’Souza suggests a few such believers in his book Life After Death: The Evidence (Regnery 2009), as do Montreal neuroscientist Mario Beauregard and myself, in The Spiritual Brain (Harper One, 2007).

First, most people who have ever lived have assumed that there is immortality in
some form. Neanderthals buried their dead seventy thousand years ago
with tools, apparently for use in another world. Many were placed in a
fetal position, suggesting that they awaited rebirth (Spiritual Brain,
p. 27). And most people have not assumed that we survive death because they
are “afraid of the dark,” as Hawking supposes. On the contrary, the
oldest beliefs usually include ancestor worship, which includes
propitiating the continuing spirits of unpleasant ancestors for fear
they will otherwise harm us. Or, as Beauregard and I put it, in such a
society the problem isn’t that everyone dies, but that no one does. (p.
48)

So is it wish fulfilment? Hardly, because most people who expect to
survive death also fear divine punishment or cosmic consequences for
unrepented sin. Fear then? No, not, for instance, among the ancient Greek philosophers who
repudiated “the gods” but assumed immortality as a fact. Similarly,
the Buddhists’ law of karma (what goes around comes around) appoints the
gods as divine helpers to the faithful, not creators or governors of
karma. Even new atheists believe, in a sense. As d’Souza has
observed,“new atheism” (modern atheistic materialism) makes immortality
untenable by definition — except in its most vulgar forms (transhumanism, for example, where we are transformed through genetic engineering miracles or get uploaded into computer Sims).

Given the ubiquity of belief, let’s look at some of the better traditional arguments for immortality:

1. The irreducible nature of human consciousness. There
is no reasonable theory of human consciousness coming from materialist
science. In fact, bookshelves are now stuffed with tomes declaring that
it is an illusion, a virtual illusion, or fraud.
Such bold statements spring from desperation. If researchers knew what
consciousness is, they would not describe it thus. There is no clear
reason why those who study so much and know so little about
consciousness should demand that the rest of us accept their view that it does not
survive death.

2. A sense of a perfection that has never been experienced. D’Souza
puts it like this: “Our ideas … contradict the reality of our lives.
It seems that we, uniquely among all living and nonliving things, seek
to repudiate the laws of evolution and escape the control of the laws of
nature.” (p. 167) For example, materialist atheists continue to have a
sense of justice, but their attempts to account for it don’t make sense.
The best explanation is the traditional one: justice really exists and
we sense it, but it is poorly realized here.

3. The changed lives of people who have had near death experiences. It’s
often said that people find change hard, but as Beauregard and I
discovered, near-deathers often change dramatically. The best noted
change is that “the cultural values of wealth, status, and material
possessions become much less important, and the perennial religious
values of love, caring for others, and acquiring knowledge about the
divine ascend to greater importance.” And that change persists through
time. They also lose their fear of death, relative to patients who had
not had such an experience. (The Spiritual Brain, pp 160-62) The most reasonable explanation is that they had seen a reality that motivated them to change their value systems.

What about the claim that “science shows life after death can’t be
true!” Where science has actually shown things, rather than advancing
speculations well ahead of facts – as increasing numbers of cosmologists
do – what has it shown? A strange and wonderful world that no human eye
could perceive, unaided. Those who insist that science makes
immortality untenable (except on materialist terms) could usefully go
back to Lord Kelvin’s 1900 address, when he famously complained about
two little dark clouds on the horizon of a completed physics, clouds
soon to be blown away. The pesky clouds were, as it turned out, quantum
mechanics and relativity.

At the end of the day, death is still the “undiscovered country,” but
the hints and glimpses of the other shore are good cause to accept it
as a reality.

Note: Recently, I wrote an account of an old man who gets a message from beyond this life: “There is a Country for Old Men,” (Touchstone, May/June 2011)