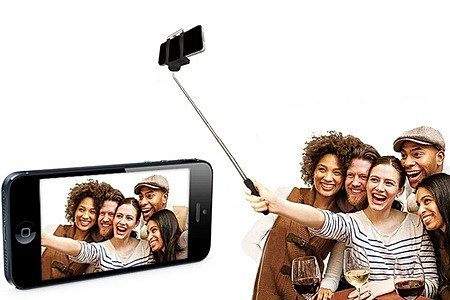 Dictionary meanings of self (the unified conscious whole that experiences something, whether it is a birthday party or a stubbed toe) don’t quite capture the concept of the “selfie” As put in a Guardian article (2013),

It starts with a certain angle: a smartphone tilted at 45 degrees just above your eyeline is generally deemed the most forgiving. Then a light source: the flattering beam of a backlit window or a bursting supernova of flash reflected in a bathroom mirror, as preparations are under way for a night out.

The pose is important. Knowing self-awareness is conveyed by the slight raise of an eyebrow, the sideways smile that says you’re not taking it too seriously. A doe-eyed stare and mussed-up hair denotes natural beauty, as if you’ve just woken up and can’t help looking like this. …

Many generations of men never knew if they looked good unless a woman indicated (often to a third party, to spare everyone’s feelings) that she was willing to meet him. Don’t believe me? Check out the dance card. Given that human nature doesn’t change much, the selfie simply can’t increase human vanity. But it can favour it in unhealthy ways.

An article at Medical Daily spells out the problem:

According to a recent study published in the journal Personality and Individual Differences, men who post online photos of themselves are more likely to be narcissistic, impulsive, and have an array of anti-social characteristics.

Selfies can lead to self-objectification, as selfie posters begin to value themselves mainly for their appearance rather than for other positive traits. They start to habitually monitor their own appearance by seeing themselves through the lens of an external observer not just in public but also in private settings.

So we are on the air all the time, instead of just maybe a few hours of our lives?

In normal human experience, we need only consider how people will see us in specific contexts: If I am a teacher, do I look like “the teacher”? Will students feel that they can gain the credit with my help? If I am the highway traffic officer, will people who have crashed up on sheet ice trust me to walk them through the aftermath? That is, we usually play a role in society. Only to our nearest and dearest do we reveal our inner selves.

The Internet, among its many effects, enables us to reveal our selves to a world that actually doesn’t care. Most people worldwide don’t seem to be taking up the offer, but for the record, in the United States the most narcissistic social media users supposedly live in California, and the least narcissistic live in Utah:

According to the survey, residents there more than anywhere are likely to use so-called status updates as opportunities for ‘brag-ommendations’ — that is, pics of the fantastic things you’ve seen and done.

No one even mentioned Ottawa, Canada. But the huge piles of dirty snow outside my window don’t make a promising selfie backdrop. Given the current frostbite advisory, we gladly leave that sort of thing to interesting Californians.

Back in the online world, we are informed that social media sites are full of narcissists, with baby boomers on Facebook, and millennials on Instagram:

As reported by The Week, Facebook is used by 71 percent of Internet users in the United States aged 18 and older. Not only do nearly three quarters of all U.S. adult web users own a Facebook account, but according to data collected by Pew Research, around 70 percent check their Facebook site daily. Still, despite this obvious upper hand, are Facebook’s days numbered? Research suggests this may be true, as more and more young Americans are now choosing to share their photos over Instagram. According to the report, roughly half (53 percent) of all young adults between 18 and 29, use Instagram.

A separate study found that although age does seem to be involved with the decision to use Facebook or Instagram, activity level was more closely dictated by the user’s level of narcissism. In a 2014 study, researchers asked social media users to complete a Narcissistic Personality Inventory as well as record how often they tweeted and/or updated their Facebook status during the routine day. The results showed that narcissism was the “primary driver” for these social media updates. Interestingly, this narcissistic motivation was more closely observed in Twitter users than Facebook users.

Some call it a narcissism epidemic:

Elias Aboujaoude, a professor of psychiatry at Stanford, notes that our ability tailor the Internet experience to our every need is making us more narcissistic. He observes, “This shift from e- to i- in prefixing Internet URLs and naming electronic gadgets and apps parallels the rise of the self-absorbed online Narcissus.” He goes on to state that, “As we get accustomed to having even our most minor needs … accommodated to this degree, we are growing more needy and more entitled. In other words, more narcissistic.”

Here’s a thought: The selfie encourages us to objectify ourselves. To be both the experiencer and the experience. The problem is that we then can’t learn or experience anything we don’t already think or know. It’s our private prison—and we just swallowed the key. Smart? Not.

Possibly the original selfie moment—tell me about competitors if you feel I really need the pain: