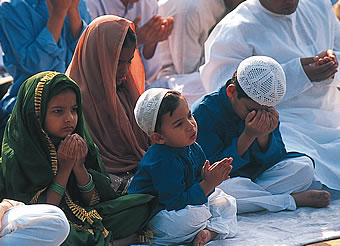 In the June 1 issue of Policy Review (Stanford University) Nicholas Eberstadt and Apoorva Shah have revealed the truly remarkable (and indeed historically unprecedented) decline in the fertility rate of the Muslim community worldwide (the Ummah).

The report (which can be seen here) is interesting for what it reports – the idea that the world’s Muslim population is undergoing a fertility collapse is not in line with popular perception.  As the authors observe:

“There remains a widely perceived notion — still commonly held within intellectual, academic, and policy circles in the West and elsewhere — that “Muslim” societies are especially resistant to embarking upon the path of demographic and familial change that has transformed population profiles in Europe, North America, and other “more developed” areas (UN terminology).”

But this view is no longer tenable if the evidence is considered.  Of the 49 countries in the world that have a majority Muslim population (43 of them are over two-thirds Muslim and 40 of them are over 90% Muslim) 48 have enough data available to see that all have suffered fertility declines over the three decades from the late 1970s to the 2005-2010 period.  While some countries have seen only marginal declines (Mali, Somalia, Niger and Sierra Leone) the overall decline for all majority Muslim countries as a whole is 2.6 births per women (when weighted for population).  Thus, each Muslim woman today is having 2.6 fewer births than her mother.  This is not only a decline but a decline faster than the rest of the world for the same period and masks some precipitous drops in individual countries:

Looking at the ten largest fertility declines over a twenty year period in the post-war era (and by extension, the authors suppose, ever to take place under orderly conditions in human history), six of the ten largest absolute fertility declines occurred in Muslim-majority countries.  The four very largest were Muslim countries (in order: Oman, Maldives, Kuwait and Iran).  Thus, the result is that:

“…a substantial share of the Ummah is accounted for by countries and territories with childbearing patterns comparable to those of contemporary, affluent, Western, non-Muslim populations. The low fertility levels for the Muslim-majority societies in question, it should be noted, have generally been achieved on substantially lower levels of income, education, urbanization, modern contraception utilization, and the like than those that characterize the more developed regions with which their fertility levels currently correspond today.”

So what implications of this decline do the authors of the study draw from these figures?  First, that projections of the population of the Muslim world will need to be revised downwards if this unprecedented fertility decline continues.  Already the UN’s “medium variant” projection for Yemen for 2050 has come down from 102 million to 62 million in the last ten years. (A 40% downward revision in a decade shows how reliable such projections can be…) Secondly, while many countries will experience “youthquakes” as a large increase in the proportion of the population at a young age become politically and economically active (Arab Spring anyone), in the foreseeable future an increasing number may face the prospect of coping with declines in 15-64 year old cohort. Lebanon will peak in 2023 for this age bracket and then will shrink indefinitely afterwards.  This places a large strain on countries’ economies, particularly when such countries are also facing the third problem – an ageing population as the older generation fails to replace itself.  As the authors ask:

“How these societies will meet the needs of their graying populations on relatively low income levels may prove to be one of the more surprising and unanticipated challenges of the fertility revolution now underway in the Ummah.”

People talk about the West’s “soft power”. Coke. Apple. Tom Cruise. Perhaps we should add to the list of exported Western cultural icons a propensity to have fewer and fewer children. It seems that more of the world is picking up on the trend with unforeseeable consequences.