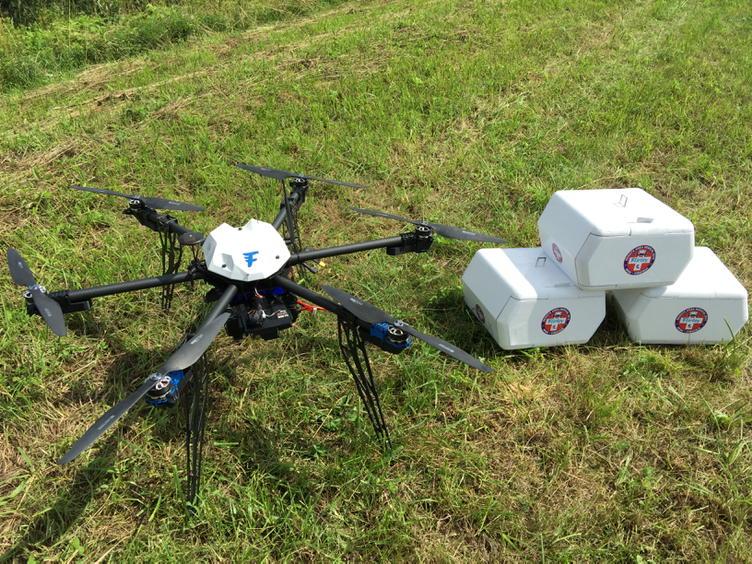 Last Friday, Mar. 25, the Nevada startup Flirtey announced that it had made the first successful package delivery to a residential area in the U. S. with an autonomous drone (not steered by a person on the ground).

The demonstration flight, which was completed Mar. 10, carried a package of emergency supplies half a mile through the air to the porch of a vacant house outside Reno, Nevada.  Although large corporations such as Amazon and Wal-Mart have been toying with the idea of drone deliveries, Flirtey attributed its first to experience it has gained with similar tests in Australia and New Zealand.

It turns out that several other countries are more welcoming to commercial drones than the U. S., where strict FAA rules are still in place that are limiting commercial drone operations involving deliveries to test flights such as this one.

What does this achievement mean for a number of groups that may be affected by it:  consumers, companies in the delivery business, and people who earn a living delivering packages?

First, the consumer.  Whenever I thought of drone delivery in the past, I couldn’t help but imagine how things could go wrong:  inadvertent haircuts from the propeller blades, for example.  Flirtey plans to avoid this sort of thing by keeping the drone itself at an altitude of around 40 feet (12 meters) while the package itself is lowered to the ground on a retractable cord leading to some sort of grappling hook that releases when the package hits the ground.

So unless you’re asleep on the porch and the drone happens to land your box of live Maine lobsters on your head, chances are small that the drone will run afoul of living creatures on the ground.  Birds are another matter, of course, but I’m sure the Flirtey engineers have ways of dealing with them too.

Although an engineer was killed in an accident involving a large experimental drone in 2013, no injuries or fatalities have so far resulted from a civilian drone colliding with a standard aircraft.  The FAA would like to keep it that way, and news reports of the Flirtey flight also mention that NASA is working on air-traffic-control software for drones.  It’s possible that the authorities will work out something like the present direction-altitude rules for large-scale aircraft, but on a smaller scale.

Commercial pilots follow the “odd north east” rule:  if your plane’s heading is anywhere from north to east to south, your altitude must be an odd number of thousand feet plus 500 feet, and if your bearing is westerly, you have to be at an even number of thousand plus 500.  So it would be easy to make a similar rule for tens of feet instead of thousands for drones.  It wouldn’t solve every potential collision problem, but it would help.

Large organizations whose business includes deliveries of small packages are eagerly awaiting the day when they can take advantage of drones.  While computerized scheduling and routing has improved the efficiency of manned delivery operations, the actual physical delivery process of packages to homes hasn’t changed much since the invention of the automobile.

Currently, the FAA rules require that delivery drones always be within sight of the operator.  That’s going to involve an operator for a while yet, but you can picture one delivery guy getting a lot more done with the help of two or three drones in a densely populated neighborhood.  Of course, a package on a string can’t go into an apartment complex and take the elevator to the 14th floor, but you’ve got to start somewhere.  So the initial operations will probably be a hybrid thing, with the delivery driver going to a central location, loading drones, and sending them to do the last run of a few hundred feet to individual houses.

Inevitably, that will lead to layoffs among delivery personnel, although with the seasonal nature of the delivery business, at first it might just mean that UPS and similar services won’t hire as many temps during the Christmas rush as they used to—they’ll just add more drones.  But if the rules eventually allow more nearly autonomous operation of drones, the unattended parts of the flights will be longer, and fewer live drivers will be needed.  And one more type of job that is currently open to someone with only a high-school education will become history.

This is not unalloyed bad news.  The nation survived the demise of the milkman in most parts of the country, and before that the iceman.  But as the current election cycle is demonstrating, for some time now the U. S. economy has been doing a fairly poor job of employing people with less than a college education, and there are lots of people out there who feel that they have gotten the short end of the economic stick.  And a good many college-educated workers with degrees in non-professional areas are underemployed, doing jobs for which they are overqualified.

This is not the place to go into this complex and many-faceted problem, but we simply note that technology is often a destabilizing force.  If you are stably under the thumb of a dictatorship, destabilizing can be good.  But just making things less stable by itself is not always helpful.

It doesn’t look like we will be getting packages from Federal Express floating down from the sky any time soon.  For whatever reason, the FAA has decided to make haste slowly on commercial drones, while other countries speed ahead.  That may give time for the job market to readjust more gradually to the future realities of the delivery business, however it is affected by the advent of drones.  The fact that the first package delivered was emergency supplies reminds us that there are disaster scenarios for which delivery drones will be a Godsend.  And nobody should resent that.

Sources:  Numerous outlets carried the news of Flirtey’s accomplishment. I referred to reports on the websites of the Christian Science Monitor at http://www.csmonitor.com/Business/2016/0326/Startup-Flirtey-drone-delivery-is-good-news-for-nacent-industry (by the way, the word meaning budding or fledgling is spelled “nascent,” not “nacent”), and Fortune at http://fortune.com/2016/03/25/flirtey-drone-legal-delivery-urban/.  I also referred to the Lapeer Aviation website http://www.lapeeraviation.com/odd-north-east/ for information about the “odd-north-east” rule.