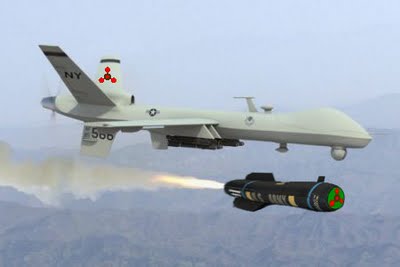 The announcement by President Obama on 22 June 2011 of substantial
withdrawals of United States troops from Afghanistan by September 2012
marks an important moment in the almost decade-long war in the country.
The impact of the decision
will be felt on the current diplomatic calculations over the nature of a
settlement that will bring the war to an end. It may also impinge on
the presidential-election
campaign in the US that reaches a climax in November 2012. But whatever
the diplomatic or political consequences of the drawdown will be, the
Afghanistan war is still far from over – and indeed, in one significant
way it has in its tenth year been intensifying rather than winding down.

This
is the use of pilotless armed drones. These are employed under CIA
command – a procedure chosen because the CIA’s rules of engagement are
less restrictive then those of the military. The continuous
drone-attacks across
the border in Pakistan have very destructive human effects that often
reach beyond the presumed insurgent targets; the agency claims to have
killed around 1,400 suspected al-Qaida and Taliban paramilitaries, but
Pakistan sources also (amid a scarcity of precise details) estimate that
hundreds of civilians have also died in these operations.

These
attacks have also greatly contributed to the marked deterioration in
relations between Washington and Islamabad – a trend exacerbated by the
US’s belief that senior Pakistani officials were involved in protecting
Osama bin Laden.

It
is notable that the use of drones has been increasing also to other
places where US forces are active, such as Yemen (see Jim Lobe, “US escalates war against al-Qaeda in Yemen”, Asia Times/IPS,
14 June 2011). The key shift here is that the CIA – according to the
same logic as in Pakistan – has become involved in mounting
drone-attacks against those suspected of backing the movement known as
Al-Qaida in the Arabian Peninsula (AQAP).
The attacks have even targeted Islamist paramilitaries in areas where
the AQAP has little influence, and run the same risk as in Pakistan of
alienating local people in a way that makes them more radical and
anti-American than they may have been before (see Hakim Almasmari, “US drone attacks in Yemen ignore Al Qaeda for local militants”, The National, 21 June 2011).

There
is every sign, however, that the US regards the use of these new
weapons of war as being successful in hitting their enemies without
putting their own troops (including aircraft crew) in danger. The
effects on non-combatants, and the impact on Pakistani or Yemeni
opinion, are largely discounted.

All
this makes armed-drones worthy of a closer look, not least as the
escalation of the United States’s use of these instruments of war is
part of a broader trend that includes the European member-states of
Nato, Israel and other states (see “Unmanned future: the next era of European aerospace?”, International Institute of Strategic Studies [IISS], Strategic Comments,
17/24, June 2011). This trend is driven in part by a necessary response
to the nature of the wars in the middle east and south Asia in the
2000s; but it also reflects extraordinary scientific and technological
advances in remote-sensing, power-plant miniaturisation and sheer
computing power.

There are several types of drones: from small
hand-launched reconnaissance platforms to the powerful aircraft-sized
Reaper, capable of launching several types of missile and bomb.  Some
drones, such as the Global Hawk, have an intercontinental range; others
have more limited range but can loiter at low speed for hours before
being used to drop their ordnance.

In 2001 the United States had
perhaps fifty drones; now it deploys around 7,000. The great majority of
these are intended for observation, reconnaissance or bomb-damage
assessment. But there are hundreds of armed-drones available, and the US
air-force training more “remote pilots” to operate these than pilots
for strike-aircraft and interceptors (see Elisabeth Bumiller & Thom
Shanker, “War Evolves With Drones, Some Tiny as Bugs”, New York Times, 18 June 2011).

This development suggests that the use of armed-drones will expand
even further as part of the broad campaign (albeit no longer
characterised as a “war on terror”) against paramilitary forces seen as
threats to western interests. The seductive appeal of drones to military strategists and political leaders is clear. But they raise many ethical and legal questions that so far have been too little aired.

This makes all the more timely a new report – Drones Don’t Allow Hit and Run (June 2011) – published by the Oxford Research Group’s programme on Recording Casualties of Armed Conflicts, which in turn developed in close connection with the Iraq Body Count.

The main author of the ORG report, which was launched on 23 June 2011 at the Geneva Centre for Security Policy, is the leading international lawyer Susan Breau, professor of international law at Flinders University in Adelaide, with the additional contribution of Rachel Joyce of King’s College, London. Breau and Joyce argue
convincingly that a number of conventions, charters and international
customary humanitarian law combine to provide an international legal
obligation on states using armed-drones to respond to certain major
consequences of their actions.

These legal documents include the Geneva conventions, the Universal Declaration of Human Rights, the International Covenant on Civil and Political Rights, various United Nations reports and statements, and case law from European and Inter-American human-rights courts.

The key conclusions of Drones Don’t Allow Hit and Run are simple – but their implications are huge:

* “There is a legal requirement to identify all casualties that result from any drone use, under any and all circumstances”

*
“The universal human right which specifies that no-one be ‘arbitrarily’
deprived of his or her life depends on the identity of the deceased
being established as to reparations or compensation for possible
wrongful killing, injury and other offences.”

The words sound straightforward, but they strike
right at the heart of armed-drone operations precisely because these
are remote operations in which the exact identities of many of those
killed are neither known nor even sought. They imply that the very unwillingness, and even the
inability, of the attackers to identify the people they kill amount to
infringements of international law. This judgment, moreover, applies
both to a state that carries out drone-attacks and to a state that
allows its territory to be used for them.

The report concentrates
primarily on Pakistan and Yemen. But drones are also being used by
western forces in Afghanistan and now in Libya,
as well as extensively by Israel. Many other countries are likely to
follow suit, which underlines the relevance and importance of the
report.

There is a tendency to view drone-warfare as something
close to a military panacea for problems of paramilitary violence. Now,
the fundamental questions it raises are being posed. These have the
capacity to hold drone-warfare to legal and moral account. This is an
unexpected challenge that cannot be evaded.

This article has been republished from openDemocracy.net under a Creative Commons licence. Paul Rogers is professor in the department of peace studies at Bradford University. He has been writing a weekly column on global security on openDemocracy since 26 September 2001, and writes an international-security monthly briefing for the Oxford Research Group.