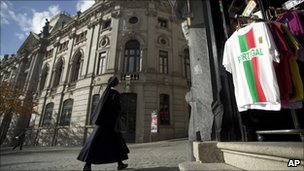 Business and commerce means people, buying and selling. The economy is the conglomerate of how that’s doing. Let’s get back to the people at the heart of it all…

The Wall Street Journal had this big front-page story this weekend that could be taken as a lengthy piece about an economic and political crisis in Europe, Portugal especially. But the fact that the piece starts with an anecdote about schooling is key and central. I found this piece most enlightening at least halfway down, right about here:

Education long was an afterthought here…The repressive dictatorship that ruled Portugal from 1926 to 1974 had the idea “that people should not have ambition to be something different than what they were,” Mr. Nóvoa says. The result was widespread illiteracy and little formal schooling…

…and a dispirited population of people, for generations. The audacity.

The ”shoulds” or “oughts” in our judgments come from what Thomas Aquinas taught as the natural law, though one would need a morally informed education to know that. So the idea ”that people should not have ambition to be something different than what they were” is a moral statement, though shaped by the particular ideological framwork of a represeive dictatorship. Trouble is, that dictator misses the point that having the ambition not to be something different but to be just what we are is the noble vocation that builds society. To be just exactly and most perfectly who we were created to be, doing what we are naturally gifted or talented or inspired to do, with training in those skills to help us excell.

Social engineers always need to control information to get their desired results of obedient citizen workers. Trouble is, without education, there’s no work, and that’s what this WSJ piece is about, as it’s playing out in Portugal. The good news is that they’re aware of it, and focusing this attention on it.

But it is a long road. “We have accumulated years and years of ignorant people,” says Belmiro de Azevedo, a billionaire industrialist.

He described the system as calcified. The central administration wields tight control. Curricula are simultaneously undemanding and rigid. Dropout rates are high.

This is another crime against humanity, of a sort not usually framed this way.

A push to evaluate teachers triggered searing strikes and demonstrations in 2008, souring relations between powerful teachers’ unions and the government. The political life of education ministers is measured in months: since the dictatorship ended in 1974, there have been 27.

This reminds me of ‘Waiting for Superman,’ in which a U.S. Lieutenant General (Julius Becton) said that running the D.C. schools was the toughest thing he’d ever done. He resigned in 16 months.

But the WSJ piece gets really interesting when it turns this corner.

In one town, A Dos Cunhados, the local school isn’t run or owned by the government. It is managed by the Catholic Church, in an arrangement that dates to the end of the dictatorship, when the new Portuguese state found it didn’t have enough facilities.

At the school, Externato de Penafirme, as at 90 others with what are called “association contracts,” the state pays a management fee to a private entity, which broadly follows the state curriculum but hires its own teachers…

Instead of being given teachers off a master list, Father Silva and other administrators of these quasi-private schools select their own. They adjust the curriculum, adding, for instance, more religious instruction. They set up teams of teachers responsible for students and try to rope back those prone to dropping out.

“We make an enormous effort to take them all to the end,” says a school administrator, José Mendes. Penafirme’s test scores put it in the top 15% of secondary schools nationwide. It is the best in Torres Vedras.

To their advocates, the privately run schools inject a needed dose of new thinking.

Yes. That’s the key, the turnaround, the ‘Eureka!’ moment in this crisis. And by the end of the story, they’re talking about young people who dropped out of school and realized they were going nowhere without an education. And the good folks in a nonprofit organization who are trying to encourage them back into classrooms.

Marco Monteiro, who is 16, was recently kicked out of his regular school. Bad behavior, he says. He hoped to go back—”I don’t have enough school to find work,” he says—and then maybe get a job in the mall. Project Leadership’s director, António Embaló, complimented him on his mechanical skills.

Injecting a needed dose of new thinking. One student, town and country at a time. It’s not the end of the story, it’s the beginning.