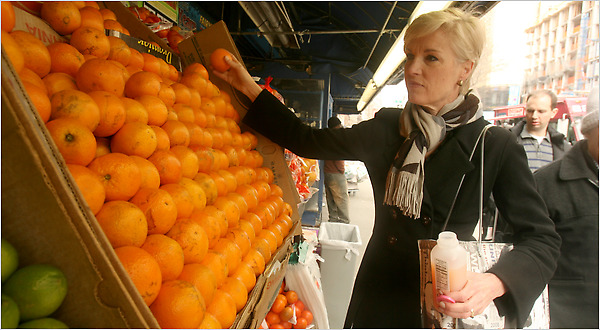 “Contraception could be free under health care law”, announced
a pre-election Washington Post headline. A “panel of experts” is supposed to be
meeting this month “to begin considering what kind of preventive care for women
should be covered at no cost to the patient, as required under President Barack
Obama’s overhaul.” Up front in the push to make all birth control free is, not surprisingly,
Planned Parenthood.

But what part of “health care” don’t these people
understand? Isn’t birth control a personal lifestyle choice? And if so, why should the
public purse pay for it? Well, because it‘s just good for the country, said
Cecile Richards, PP’s president (pictured) on the Bill Press Show:

“I think it’s important, Bill, to understand that
unlike some other issues of cost, birth control is one of those issues that
actually saves the government money,” said Richards. “So an
investment in covering birth control actually in the long run is a huge cost
savings because women don’t have children that they weren’t planning on having
and all the sort of attendant cost for unplanned pregnancy.

Huh? Eradicate the national debt and financial crisis by
eradicating the nation’s future citizens? Good luck with that.

PP’s logic dictates that someone whose birth has been
planned is more likely to be an asset to society, as opposed to someone whose
birth was unplanned. Real life, however, doesn’t always follow that model. Many
successful people emerge from less than ideal circumstances. “Rags to riches”
stories (and there are many) in business, art, entertainment, and sports, will
bear this out. It’s preposterous to suggest that the circumstances of one’s
conception determine one’s destiny.

No one denies that it costs money to raise children, of
course, but those who do so are making a fundamental investment in the future.
Children grow into adults, who not only contribute to the GDP by entering the
workforce, but also contribute, using their own special gifts, to creating
families, communities, and societies. To view babies solely as economic
liabilities, as Richards does, is not only dehumanizing; it makes no economic
sense whatsoever.

On the “dehumanising” note, the push for free universal
contraception ignores many moral and ethical issues. For example, some forms of
birth control (the “morning after pill” and IUD to name but two) are not
preventative, but actually terminate pregnancy in its earliest stages. Many
doctors, pharmacists and other health care professionals don’t want to be
complicit in this type of “health care.” Of course these things do not bother
the country’s largest abortion provider. It bothers other people though:

Jeanne Monahan, a health policy expert at the conservative
Family Research Council, said her group would oppose any mandate that lacks a
conscience exemption for moral and religious reasons.

U.S. Catholic bishops say pregnancy is a healthy condition,
not an illness. In comments filed with the Department of Health and Human
Services, the bishops say they oppose any requirement to cover contraceptives
or sterilization as preventive care.

“We don’t consider it to be health care, but a
lifestyle choice,” said John Haas, president of the National Catholic
Bioethics Center, a Philadelphia think tank whose work reflects church
teachings.

Others who advocate the comprehensive contraceptive coverage
may simply be dreaming when it comes to its proposed efficacy:

The use of birth control is “virtually universal”
in the U.S., according to a government report this summer from the National
Center for Health Statistics.

Still, about half of all pregnancies are unplanned, and many
occur among women using some form of contraception. The government says the
problem is rarely the birth control method, but “inconsistent or incorrect
use,” such as forgetting to take a pill.

By what logic do they come to that conclusion? If people
aren’t “careful” about using birth control for which they had to shell out
their own hard-earned money, what makes anyone think that folks would be more
conscientious with “free” contraceptives paid for by government largesse? That
simply defies human nature, common sense, and historical precedent.

“The shift we need to see in the United States is a
shift away from methods like the pill and condoms to the most effective
methods, like implants and IUDs,” said Dr. Jeffrey Peipert, a principal
investigator on the study. “And we’ll only see that shift if somebody is
willing to pay for it.”

The question is: who is that “somebody” going to be?
The burden of multi trillion-dollar debt will have to be borne by American
citizens yet unborn (even though we’re not allowed to think of them in terms of
“people”).

The post-modern western welfare state is running out of
taxpayers. I wonder why.