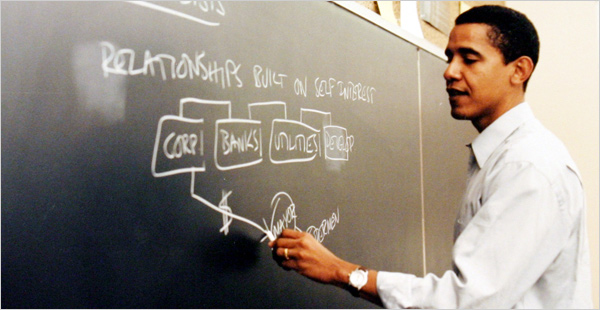 The new American president has made much of the fact that education is one of his top three priorities. Right now the other two, the economy and health care, are generating their fair share of critical ink. However, the reaction to his educational plans for the nation’s schools has ranged between bored glances from most of the American public and to broad smiles from the teachers’ unions.

It is a hoary cliché to announce that the education of our children is of fundamental importance to our (or any other) nation. Every US president in my aging memory bank has declared himself “the Education President” and surrounded himself at photo ops with dozens of smiling, carefully orchestrated multiracial faces. President Obama is no exception.

His educational plan was trotted out this week in a White House speech to the Hispanic Chamber of Commerce. Like those of his recent predecessors, President Obama’s plan is flying under the flag of “reform”. He promises his administration will promote five reforms in particular: major funding for early childhood education; increased funding for and emphasis on standards and assessment; new funding to recruit, educate and reward teachers; a substantial increase in the number of the country’s charter schools and new funding for programs to expanding life-long learning with a special emphasis on all American’s having another year of education.

While the President, as usual, delivered his speech quite well, there is little new, let alone revolutionary, about it. All these ideas, except for the rather murky idea of having all Americans in school another year, have been kicking around for decades. The speeches and programs of both Bush presidents and Mr Clinton were sprinkled with these ideas. The single new element to the Obama Plan is that he has convinced the American people to give him a giant cheque book to implement his reforms.

Historically, it is a very modern idea that money will buy a quality education. Our current experience with funding education hardly supports such a view. Arguably the worst school system in America, the Washington DC schools spends the most dollars per pupil, US$16,650. On the other hand, Utah schools, which relative to the rest of the nation, are outstanding schools spend a third, $5,700, of what is spent in the nation’s capital.

Of course, money to keep quality teachers is important, but money is hardly the cause of the embarrassing performance of American students. Compared with Asian schools, where students are dramatically out performing our children, ours schools are awash with money. The real issue is how we spend our educational dollars. Korean or Japanese educators don’t waste millions on ineffective busing programs to achieve mythic diversity nor spend precious money on Olympic-size swimming pools. They somehow are able to brings their students to a high level of academic achievement without loading their schools with layer upon layer of administrators, curriculum coordinators, vocational counselors and mental health specialists.

Money, however, is what the Obama Plan is all about. It is a Christmas tree of goodies for the National Education Association, the country’s most powerful political lobby and the current soul of the Democratic Party. The NEA represents over 10 percent of the delegates at the Democratic convention and totally controls the party’s educational agenda. If President Obama’s speech were not itself written in the NEA’s offices, it was surely given the organization’s stamp of approval before delivery. As such, it represents the President with an opportunity to pay his election victory debt.

Every one of the President’s five-point plan means more jobs and influence for the teachers’ union. More early childhood means more teachers and administrators, even though the effects pre-kindergarten and day care are increasingly in doubt. (Finland, whose students recently earned the highest scores in international achievement tests, doesn’t send its children to school until they are seven years old) The Obama Plan ought perhaps be called the NEA’s Full Employment Plan.

Having every America spend an additional year in a classroom sounds wonderful. It will mean a staggering increase tax dollars to fund such an increase. On the other hand, the opportunity costs for an individual student staying away from meaningful salaried work will also be huge. Undoubtedly, an extra year of intensive, European-style outcomes-oriented education in 21st Century skills would be a boon to the American economy. However, a day or two spent in an American high school or on an American college campus observing the dull passivity that passes for education would chill such enthusiasm. As with alcohol, more is not always better.

President Obama’s plan has been applauded for its courageous support for charter schools, an educational idea that has been with us since the 1970s. Initially, these alternatives pupil schools were a threat to the unions’ iron handed monopoly over American public schools. But as frequently happens to promising educational reforms, the Establishment learns how to control and then tame them. This is what has happened to the charter school movement. While charter schools represent an opportunity for innovative teaching and greater parental choice and involvement, the unions and their well-rewarded politicians have made sure their numbers are carefully limited and the financial constraints on them are severe. Now that the charter school movement is in its pocket and offers no threat to its control of education, the NEA is actually supporting them. Yesterday’s much feared eight hundred pound gorilla of educational reform has been turned into an organ grinder’s monkey.

It is clear from President Obama’s speech that he is using his promises to expand charter schools to divert attention from what he is not doing. That is, letting real competitive forces reform our schools. As a Chicago politician and now as president, he has exercised school choice for the education of his two daughters, while, de facto, denying it to those parents without his income. The fact of the President’s stonewalling parents’ efforts to get real educational choice, plus the picture of his daughters being driven out the their tony private school, passing the orange school busses delivering Washington’s children to those failing public schools, is the unstated message of his speech.

If this speech represents the sum and substance of President Obama’s educational reform, Americans are in trouble. More politically-motivated and state-controlled programs are not what American schools need. This is not reform, but the sinking of more dollars into a tired, broken and leaden system. While sadly it is understandable that educators will ignore all the strings attached and line up for the free money flowing from Washington, it has little to do with what education is all about.

The Obama Plan contains much talk about education and reeducation the American work force, but there is little to suggest a concern for develop the person. Our children are more than economic entities to be fitted and shaped into someone’s idea of what our labor needs will be down the road.

A century ago, G. K. Chesterton wrote “Education is simply the soul of a society as it passes from one generation to another.” If GKC had been around to hear this speech, he would have wept.

Kevin Ryan founded the Center for the Advancement of Ethics and Character at Boston University, where he is professor emeritus. He has written and edited 20 books. He has appeared recently on CBS’s “This Morning”, ABC’s “Good Morning America”, “The O’Reilly Factor”, CNN and the Public Broadcasting System speaking on character education. He can be reached at kryan@bu.edu