Rembrandt: Self-portrait as the Apostle Paul, 1661, Rijksmuseum, via Wikimedia

Many lists of “the greatest artists of all time”, compiled from surveying and polling the general public, tend to garner the same handful of names with little variation. Michelangelo, Leonardo, Picasso, Rembrandt, Warhol: each of these names, eminently recognizable, calls to mind not only unique patterns of color and form, but also an evocation of the cultural milieu of the artist’s time. Leonardo and Michelangelo summon the ideals of the High Renaissance, with classical models of composition and figural painting. Picasso is the modern iconoclast, whose genius was in breaking up forms and images as they are perceived. Warhol’s mass-produced pop images continue to serve as symbols of post-World War II cultural mores.

But Rembrandt—a name as familiar as the others in the canon—what was his special appeal? Leonardo created Mona Lisa, Michelangelo the Sistine Ceiling, Warhol had his soup cans… not one particular painting by Rembrandt stands out as his “iconic” piece. And yet, his face is more familiar to most people than Leonardo’s, Michelangelo’s or Picasso’s, due to the number of self-portraits he left behind, a quantity so significant as to suggest that his own image was almost an obsession with him. However, it would be hard to plead the case that this fascination was born of vanity: he painted himself as he was—unidealized, with a roundish nose, unkempt hair, and sometimes a silly expression on his face. 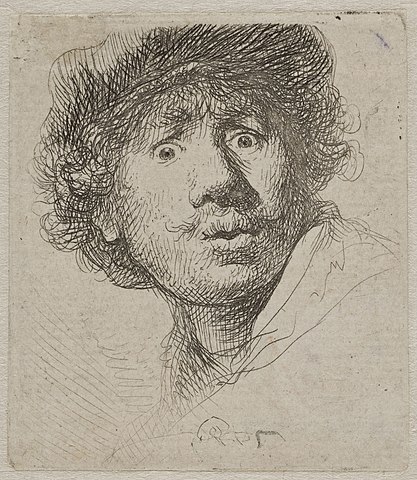 This year, 2019, marks the 350th anniversary of Rembrandt’s death, and much tribute has been paid to him, especially in the city of Amsterdam, where he lived and worked, and in his native Leiden, a municipality in South Holland. Exhibitions in his honor have been held throughout Europe, the United States and Canada, as well as the United Arab Emirates and Zimbabwe.

While so many, worldwide, are familiar with his name, fewer may be familiar with his life story. Born Rembrandt Harmenszoon van Rijn in 1606, he was the son of a miller who “married up” (his wife was the cousin of his dealer, Saskia van Uylenburgh, who brought a significant dowry to the marriage). He was a fashionable portraitist in his prime, but due to changes in his patronage along with an extravagant penchant for collecting art, interesting costumes and antiquities as props for his paintings, he went bankrupt. According to one legend, his bankruptcy required him to liquidate his collection of work, and later when he wanted to buy back a copy of his own etching Christ Teaching of 1647-9, the price had increased in value to the great sum of 100 Guilders. (This work is now known colloquially as “The Hundred Guilder Print”).

Rembrandt was a portraitist for the new wealthy middle class, as well as a painter of religious subjects. When sourcing models for his subjects, he used faces of ordinary people rather than people of noble face and figure, and he did not idealize their features in his renditions. He visited the Jewish quarter of Amsterdam and did a series of studies of young Jewish men as studies for the face of Christ, so that Jesus would accurately resemble a Semitic man of Palestine.

Rembrandt was not the first artist to use “everyday people” as models. His Italian predecessor, Michelangelo Merisi (better known as “Caravaggio,” 1571 – 1610) preceded him in having peasants sit for him (even with dirt on their feet at times), which caused scandal. Although Rembrandt had never traveled to Italy, he would’ve been familiar with Caravaggio’s work from copies, as well as with other Dutch artists who imitated the Italian master. Rembrandt also embraced Caravaggio’s tenebroso (as the dramatic use of light and dark was called) as one of the hallmarks of his own painting. 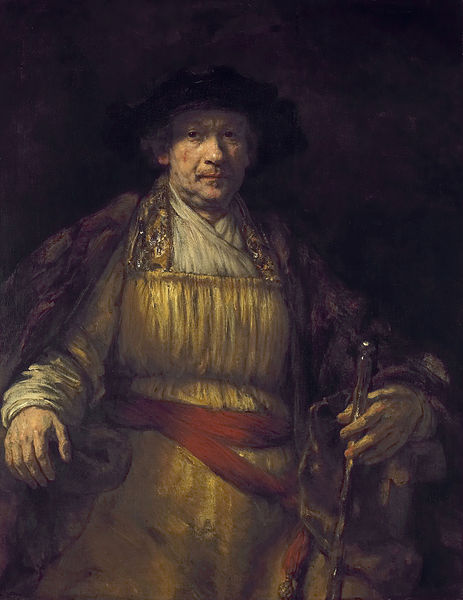 The light that enters from below in his late self-portrait in the Frick gives a quiet glow to the lower part of his face, his right hand, and plays off of the delicate folds of the elegant costume. His eyes—arguably the most important part of any portrait—gaze out at the viewer and yet remain in shadow, as if to give some privacy to his innermost thoughts. His features are exposed in every detail, showing his age and experience. One could say that Rembrandt’s light is so important in his work that it almost functions as another person in the image.

At a time when most artists sought to hide the strokes of their brushes, Rembrandt would sometimes retain dashes and lines of color to indicate his skill at drawing with minimal effort. He chose etching as his preferred print-making medium, which allowed the accidents of quick drawing to show, rather than using the more laborious but elegant lines of steel engravings. In printing his etchings, he would often leave some extra ink on the plate to add atmospheric effects and shadows. The artistic “process” was another player in his oeuvre, more present in some works than in others. Similar to his practice of accurately depicting common people as painting subjects, Rembrandt similarly eschewed the notion of “perfection” as a product of overcultivation in his very artistic method.

Unlike many of his contemporaries, Rembrandt’s work focused principally on portraits and religious subjects rather than landscapes, still lifes, or even scenes of modern life. And yet, his Dutch sensibility for the little things of everyday life appear in his religious works as well. For example, in his Holy Family of 1646, the viewer looks through a curtain and proscenium like a frame into an intimate family scene. Rather than depicting the Holy Family in an idealized landscape (as Leonardo or Raphael would have done), Rembrandt shows them at home, like any other family in the midst of their occupations. The child Jesus looks like he is in need of comfort, as his barefoot mother has just picked him up from his cradle at the left, leaving the bed linens rumpled. St Joseph works in the shadows to the right of the center, which is occupied by a small fire and a housecat. The intimacy is emphasized by the half-drawn trompe l’oeil red curtain to the left, as if we are privileged to see into the humble abode. Much of the scene is in shadow, but the light picks up the faces of the Virgin and Child and the cradle. The figures are dressed in clothing that contemporary people of Rembrandt’s time might have worn. The gentle light seems to comfort and animate, and serves as a non-obtrusive symbol of the Light of the World.

Revisiting the question posed earlier—Why has Rembrandt remained a fixture among the “greatest hits” of art history? —we may find some part of the answer in these religious paintings. Rather than setting the Holy Family apart as an ideal to be venerated, his work includes us, represents us, invites us to join. As Taco Dibbits, the Director of the Rijksmuseum in Amsterdam said recently, “Rembrandt is not about impressing, he’s about making you feel, making you live that moment. That’s a completely different type of rhetorical approach than we were used to from earlier painters. He doesn’t monumentalize it; he makes the story internal and makes you feel it. His gods are people, in the end.”

During his own lifetime and since, Rembrandt has had his critics, who criticize his lack of interest in what would have been called classical ideals, proportions, and maybe even respect for his sacred subjects. But just as he painted his own face complete with all of the accidents of nature, in painting sacred subjects with the same love of real life he gave his viewers a window on the world as it is, and a participation in the holiness of everyday life.

Sarah Phelps Smith, Ph.D., is an art historian and critic who has taught at University level.  She lives in Ohio and takes students to study Renaissance art on site in Italy.

Sarah Phelps Smith, Ph.D., is an art historian and critic who has taught at University level. She lives in Ohio and takes students to study Renaissance art on site in Italy. More by Sarah Phelps Smith