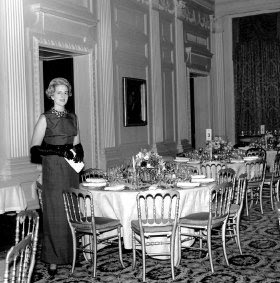 Every so often the question of manners bubbles up through the rough exterior of public life and reveals a hankering for less brash informality, more civility in daily life. A few years ago there was a rash of articles in the US press about parents sending their children to after-school etiquette classes. There they learned how to use a knife and fork, shake hands and introduce themselves, and make eye contact with another person while conversing. Judging by a quick Google peek at the Web there is plenty of that still going on.

The death this week of a famous American arbiter of etiquette raises the question of who the standard bearers of good manners are today. Letitia Baldrige, social secretary at the White house under the Kennedys, took over from Amy Vanderbilt as the nation’s authority on the subject in the 1970s, says the New York Times.

A businesswoman herself, her advice extended to executives and the workplace.

“There are major C.E.O.’s who do not know how to hold a knife and fork properly, but I don’t worry about that as much as the lack of kindness,” she told The New York Times in 1992. “There are two generations of people who have not learned how important it is to take time to say, ‘I’m sorry’ and ‘please’ and ‘thank you’ and how people must relate to one another.”

Since then another generation has arrived at adulthood clutching mobile devices to which their eyes constantly drift in the midst of conversation — assuming that a real face-to-face conversation even begins when there are so many distractions.

Ms Baldrige’s biography, as summarised in the Times obituary, oozes class, but she was not hidebound by the rules of yester-year (it was acceptable to cut salad with a knife, she advised executives). It seems she “long contended that the heart of all etiquette was consideration for other people rather than a rigid set of rules.”

Married, and the mother of two children, she acknowledged the critical role of the family in civilising society:

Family, Ms. Baldrige believed, was where the patterns for manners, humanity and true civilization were set, and the American family was failing to do its job.

“We are not passing values on to our children,” she told The Toronto Star in 1999. “We are not sitting down at the dinner table talking about the tiny things that add up to caring human beings. Jackie [Kennedy] learned from her mom, who had beautiful manners.”

That, I think, answers the question about today’s standard-bearers: parents, in their own homes.