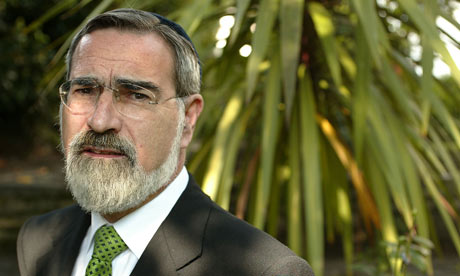 It’s not very often that you find an eminent public figure who combines shrewd political observation with philosophical depth. But the other evening Britain’s chief rabbi, Sir Jonathan Sacks, who entered the House of Lords last week as Lord Sacks of Aldgate, proved that he is such a person. In a speech at Theos, a theological thinktank in London, he examined the deep cultural reasons behind the decline in the British birthrate. The last paragraph is the best.

Now I am going to do something here which is deliberately provocative, but why should the angry atheists get all the best tunes? So let me give you two very provocative examples; let me begin with the neo-Darwinians. After all, it’s their year – the 200th anniversary of Darwin and 150th of The Origin of Species. I haven’t seen this argument ever presented before; a five step neo-Darwinian refutation of neo-Darwinism.

1. A person is, in Richard Dawkins’ beautiful phrase, “a gene’s way of making another gene”. So forget religion, forget values, forget ideals, its all about reproduction; handing on our genes to the next generation.

2. Europe today is the most secular region in the world.

3. Europe today is the only region in the world which is experiencing population decline. As you know, zero population growth – a stable population – requires an average of 2.1 children for every woman of child-bearing age in the population. Not one European country has anything like that rate today. Here are the 2004 figures: In the United Kingdom: 1.74, in the Netherlands: 1.73, Germany: 1.37, Italy: 1.33, Spain: 1.32 and Greece: 1.29.

4. Wherever you turn today anywhere in the world, and whether you look at the Jewish or Christian or Muslim communities, you will find the more religious the community, the larger, on average, are its families.

5. The major assault on religion today comes from the neo-Darwinians. From which it follows, as night doth follow day, that if you are a true neo- Darwinian believer you want there to be as few neo-Darwinians as possible. QED.

Now, actually, it sounds like a joke, but beneath it, is a very serious point indeed. Parenthood involves massive sacrifice: of money, attention, time and emotional energy. Where today, in European culture with its consumerism and its instant gratification ‘because you’re worth it’, in that culture, where will you find space for the concept of sacrifice for the sake of generations not yet born? Europe, at least the indigenous population of Europe, is dying, exactly as Polybius said about ancient Greece in the third pre-Christian century. The century that is intellectually the closest to our own – the century of the sceptics and the epicureans and the cynics. Polybius wrote this:

The fact is, that the people of Hellas had entered upon the false path of ostentation, avarice and laziness, and were therefore becoming unwilling to marry, or if they did marry, to bring up the children born to them; the majority were only willing to bring up at most one or two.

That is why Greece died. That is where Europe is today.

Bravo! May Lord Sacks bring a bit of common sense into the his new digs on the Thames. ~ London Telegraph, Nov 5