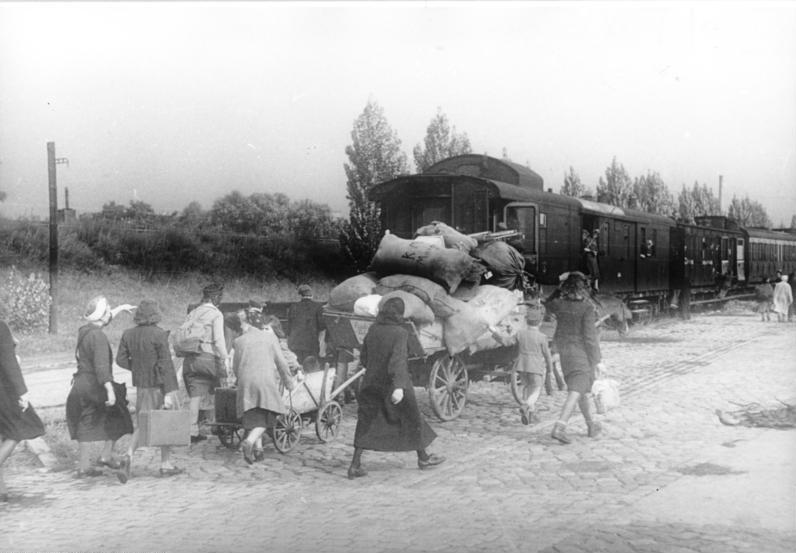 As train after train of refugees arrives in Germany, swamping the railway stations and stretching the capacities of welfare organizations, a senior Berlin-based administrator protests against the strain the newcomers are placing on the country’s resources.

Germany, he warns, cannot go on indefinitely being treated “as a waste-paper basket with a limitless capacity for the unwanted waste of the world.”

More importantly, the scale of the influx is in danger of giving rise to a toxic brew of resentment on the part of the indigenous population that might well lead to neo-Nazism and ultra-nationalism once again becoming significant forces.

“Do we not now,” he asks, “tend to compress that mixture to the point of detonation?”

Crassly worded though his protest may be, the speaker’s concerns are widely shared by those responsible for Germany’s, and Europe’s, governance. Yet he is not himself a German, nor is he referring to the refugees coming from Syria or Libya in the summer and autumn of 2015.

His name is Colonel Ralph Thicknesse, a migration specialist in the British army of occupation after the Second World War, and he is expressing his alarm in the summer of 1946 over the worst refugee crisis in Europe’s history – one deliberately created by the victorious Allies themselves.

This episode, which is examined in my book Orderly and Humane: The Expulsion of the Germans after the Second World War, provides essential context for the way in which Europeans in general, and Germans in particular, are today approaching a problem that has forcefully reminded many of them of their own traumatic postwar experiences.

Before 1939, millions of German speakers lived in communities scattered throughout central and southeastern Europe – in Czechoslovakia, Poland, Hungary, Yugoslavia, Romania and even the Soviet Union.

After the First World War, they became minorities in the new states created in the Paris peace settlement. Resentful of their drop in status, undesired by their new rulers who viewed them as impediments to the creation of “pure” ethno-national countries in the region, they were a source of – and pretext for – international instability in the interwar era.

German minorities in red on this 1910 map of the Austro-Hungarian empire. Adrein

Indeed, it was the condition of the German minority in Danzig and the so-called Polish “Corridor” that provided the excuse for Adolf Hitler’s launching of another world war in September 1939.

After the war, Winston Churchill of Great Britain, US President Franklin D Roosevelt and Soviet leader Joseph Stalin were each resolved that there would be no repetition of this problem.

By 1944, they had agreed that all German speakers in Czechoslovakia and Hungary, regardless of age or sex, would be driven out en masse and deposited in the rubble of the Reich. Churchill promised:

There will be no mixture of populations to cause endless trouble…a clean sweep will be made.

That was not all. To compensate Poland for territorial losses to the Soviet Union, the Allies transferred 40,000 square miles of eastern Germany – an area larger than Portugal – to Warsaw’s control. Approximately eight million Germans living in this region were also marked for forcible displacement.

During the immediate postwar years, the Allies thus devoted themselves to the expulsion from their homes of between 12 and 14 million people: the largest single episode of ethnic cleansing in human history.

Not all of those targeted waited to be physically removed.

Millions fled westward as the Red Army swept into Germany in early 1945, becoming permanently displaced when the Allies forbade their return. After V-E Day, millions more swamped German cities, when they were force-marched at bayonet point to the frontiers by Polish and Czechoslovak troops or placed in overcrowded cattle cars. More than four-fifths of the expelled were women, children or old people.

In the single month of July 1945, 550,000 of them, most possessing no more than the clothes on their backs, were dumped in Berlin, leading the Soviet authorities optimistically but futilely to issue a temporary ban on further arrivals.

Other German and Austrian cities – Munich, Leipzig, Vienna – had to cope with a similar influx. For the better part of two years, the trains continued to arrive from the south and east, each day decanting the equivalent of the population of a small town on Germany.

A humanitarian catastrophe was inevitable, and in fact had been acknowledged as such by the Allies themselves before the operation ever began.

Often subjected to severe maltreatment prior to or during their expulsion, including sexual violence on a massive scale, the predominantly female expelled population more often than not reached Germany in deplorable physical condition.

Many did not survive the ordeal.

Gerald Gardiner, the future British lord chancellor, was one of many international observers to find disturbing resonances in the scenes unfolding at the disembarkation points:

The removal of the dead in carts from the railway stations was a grim reminder of what I saw in early days in Belsen.

Through herculean effort, largely on the part of the Germans themselves, the refugees were eventually resettled in West and East Germany.

By then, though, at least 500,000 had died as a result of hunger, disease, rapes, beatings or extrajudicial executions by soldiers and militia of the expelling countries.

What it all means for today’s refugee crisis

This enormous man-made disaster, to which too little attention has been given, carries lessons for Europe today.

The first, paradoxically, is to set contemporary problems in perspective.

Substantial though today’s exodus from the Middle East may be, it pales in comparison to the situation Germany faced and surmounted after the war. The arrival of up to a million newcomers in 2015 presents real challenges, but a prosperous European Union with a population in excess of 500 million has the means to overcome them.

The fact that nearly three-quarters of the refugees are healthy working-age men, in contrast to the expelled population of 70 years ago, will further reduce the economic burden of absorption.

A second lesson is that the problem of forced migration cannot be solved by asylum and assimilation policies alone.

Despite the expelling countries’ best efforts, not all German speakers ended up being removed from Eastern Europe in the 1940s. The deportations largely came to an end in mid-1947, when the Big Three powers, alarmed by the social and economic chaos their policies were creating in Germany, gave orders to Poland, Czechoslovakia and Hungary that the transports must cease.

The Allies had the political resolve and military capacity to make that decision stick. The European Union today does not.

Because forced displacements in the modern world are nearly always the product of political and strategic initiatives – in the current instance, those taken by governments and armed nonstate actors in the Middle East and North Africa – they will continue until the EU acquires the means to counteract them.

But the final point to note is that Colonel Thicknesse’s warning about the political consequences of a purely reactive response to the refugee crisis is not to be ignored.

The EU is a union of democracies, all of whose leaders are answerable to their electorates. Germans today have taken the lead in extending a welcome to the displaced Middle Easterners in large measure because memories of the Vertreibung, or “Expulsion,” in which so many of their parents and grandparents suffered, remain fresh.

But not all of the continent shares their history, and the EU’s leaders are not in a position to compel their peoples to accommodate fresh waves of refugees as the defeated Germans were forced to accept their uprooted cousins after the war.

Long before the limits of Europe’s demographic or economic absorptive capacities are reached, voters are likely to rebel against open-ended commitments to find homes for the victims of collapsing states and civil wars in the Middle East.

Marine Le Pen of French Front National: France will not open the door
to the world’s misery. Jean-Paul Pelissier/Reuters

If the continent’s leaders are not to bring about political changes that may have destructive consequences for the rights-based framework upon which the postwar European project has been built, it seems clear that they will have to demonstrate their ability to address the problem of forced migration at its source.