Newspapers have their “silly season” of shock-horror absurdities in the slow news summer months. How about bioethics journals? When two very loopy articles in peer-reviewed journals surface in as many weeks, their silly season is clearly February and March.

First two Italian/Australians asserted in the Journal of Medical Ethics that infanticide was morally permissible. That created a firestorm of commentary which badly tarnished the prestige of bioethics as a serious discipline.

Now an American, a Swede and a Briton are about to publish an even weirder article in a journal called Environment, Ethics and Policy. Their proposal is to combat climate change with human engineering. People who are smaller and shorter and eat less meat will help reduce both their own carbon footprint and bovine flatulence (which is a significant contributor to greenhouse gases).

The details of their essay are so extraordinary that some caveats are needed to ensure that the authors get a fair hearing. First of all, although engineering children is clearly eugenics, the authors insist that it is the nice kind of eugenics, the privatised voluntary kind, not the government-enforced mandatory kind.

Second, these are thought experiments, not practical proposals. And third, the eccentricity of the solutions is justified by the urgency of the problem. International agreements on carbon emissions are not working and the feasibility of geo-engineering the planet by changing the chemistry of the oceans or sucking carbon dioxide out of the atmosphere with giant sponges seems remote.

So imaginative solutions are needed – which the three bioethicists, who come from New York University and from Oxford, supply. In spades.

Their most eye-popping brainwave is turning us into hobbits. “For instance,” one author, S. Matthew Liao, of New York University, told The Atlantic, “if you reduce the average U.S. height by just 15cm, you could reduce body mass by 21% for men and 25% for women, with a corresponding reduction in metabolic rates by some 15% to 18%, because less tissue means lower energy and nutrient needs.”

Another intriguing proposal is inducing positive attitudes towards the environment with drugs, although Liao sees it as a way of boosting willpower rather than inducing beliefs.

“If you crave steak, and that craving prevents you from making a decision you otherwise want to make, in some sense your inability to control yourself is a limit on the will, or a limit on your liberty. A meat patch would allow you to truly decide whether you want to have that steak or not, and that could be quite liberty enhancing.”

Then there is population control. Liao dismisses the one-child policy advocated by some environmental groups as coercive. He favours a child-per-family quota based on volume and weight rather than number. Parents could have three small-sized children or two medium-sized children or one really large basketball player.

Don’t be too quick to judge. Another author, Rebecca Roache, of Oxford told the Guardian that most great ideas often seem preposterous at first.

The article has even been criticised by other bioethicists, the Swedish author, Anders Sandberg, admitted to the Guardian. But he is unperturbed by labels like “eco-Nazis” and “eugenicists”. “We are fairly typical liberal academics thinking about the world,” Sandburg says.

Well, if Liao, Roache and Sandberg are typical, there is something wrong with liberal academics. They have blithely overlooked so many social, political and moral objections and have such a feeble grasp on what makes us human that they bring all of bioethics into disrepute – just as the authors of the infanticide paper did.

What is the source of these common-sense defying conjectures? After all, writing science fiction is not part of an ordinary bioethicist’s job description. Most of them are busy chipping away at the coal face, clarifying the conundrums that crop up every day of a doctor’s life. It’s simply not true that bioethics is one of “the world’s most unnecessary occupations”, along with aromatherapists, golf pros, journalism professors and American vice-presidents, as Andrew Ferguson sneered recently in The Weekly Standard.

As bioethics blogger Wesley J. Smith points out, we owe a lot to bioethicists who think deeply about the problems arising from technological mastery over the human body. Thinkers like Leon Kass or Gilbert Meilander or Margaret Somerville have helped to clarify the issues.

Respectable bioethicists can be controversial, but only a few have slipped their moorings from common sense and floated off to la-la land. These are the academics who are regularly pilloried in the media. Where do they come from?

My hunch is that most media wildfires are lit by utilitarians. If you examine the academic credentials of the five academics involved in these recent papers, all of them had links with Oxford and/or Monash University in Melbourne, both redoubts of utilitarianism. The notorious Peter Singer worked for many years at Monash, and his student, Julian Savulescu, now heads up the Uehiro Centre for Practical Ethics at Oxford.

You might think that utilitarianism, whose foundational principle is the greatest good for the greatest number, is a left-brain theory for bean-counters. The first utilitarian, the 19th century philosopher Jeremy Bentham, taught that the most ethical solution could be reached with his “felicific calculus” – balancing pleasures and pains without need for any transcendent realities. 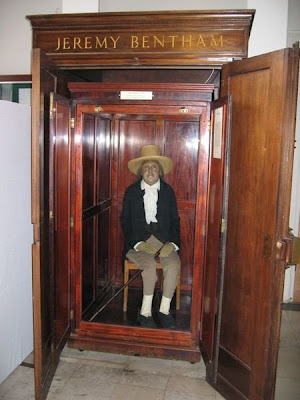 But there is a right-brain side to this dry-as-dust philosophy. Highly logical people are often drawn to weird forms of spirituality. Jeremy Bentham, for instance, is a beacon of incandescent weirdness for succeeding generations. He specified in his will that his body was to be preserved, dressed in his best clothes, and displayed in a glass cabinet to inspire “pilgrims [and] votaries of the greatest-happiness principle”. For years before his death – so it is said — he jangled in his pockets the glass eyes which were to adorn his mummified skull. It was an odd way to become immortal.

One of the most significant theorists of utilitarianism, the 19th century philosopher Henry Sidgwick, also founded a Society for Psychical Research, which conducted sympathetic investigations into spiritualism – séances, communications with the dead and so on.

Utilitarians don’t believe in human nature, but only in a sliding scale of consciousness. Persons are beings (animal or human) who are capable of anticipating the future and of having wants and desires for the future. There is nothing stable and unchanging about human nature. So utilitarians are free to redefine what human beings are and what they can be. The less adventurous ones, like Peter Singer, are content to include some animals and to exclude infants and comatose adults. The more ambitious ones, like Julian Savulescu, an Oxford bioethicist, dream of enhancing our present condition with drugs and genetic engineering.

Moving to another level, there are transhumanists who have visions of Humanity 2.0. These humans of the future will be stronger and faster, vastly more intelligent and even more altruistic and peaceful. Some fantasise about achieving immortality by uploading their minds onto computers. This is a logical extension of the utilitarian mindset. If the boundaries of the future are not set by human nature, humanity is just a work in progress, a plaything for imaginative bioethicists.

Strictly speaking, transhumanists are not utilitarians, but utilitarian axioms underpin transhumanism. As Savulescu told an ethics journal a couple of years ago, the two approaches make a nice fit:

“Transhumanism has a kind of group-think or quasi-religious quality that does not suit well my nature. I prefer to stand outside it and make my own arguments. But their hearts (and minds) are in the right place. We agree on most things.”

Despite the prestige that Singer and Savulescu and other utilitarians have, at least in the media, loopiness is hard-wired into their philosophy. A utilitarian bioethicist is always going to be a loose cannon, rolling wildly around the deck in ethical storms, splintering and smashing the fragile public image of his or her profession. If other bioethicists want to repair their dented prestige, shunning utilitarian colleagues would be a good place to start.