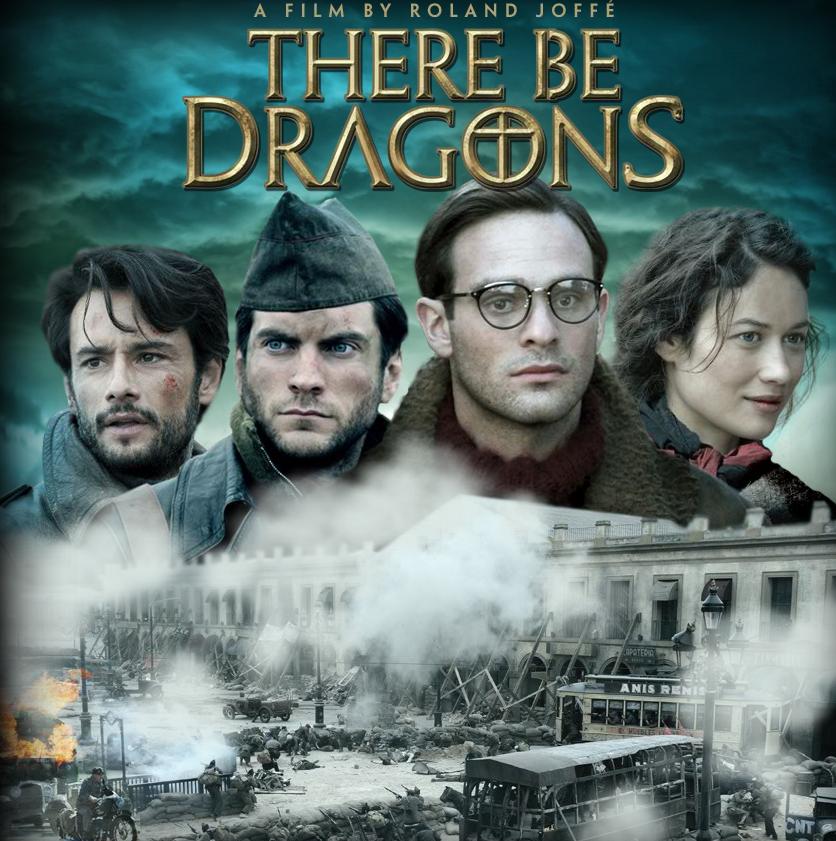 That’s the teaser on the promotions for the upcoming film ‘There Be Dragons’, particularly a colorful four-page flyer I held up for my audience at a recent talk on ‘the ultimate social network.’ Why is this project so interesting? Because an agnostic Hollywood director, known for other films highly successful in the popular culture, decided to make this new one about the dramatic real life story of…a Catholic saint.

I was struck by Josemaría’s statement that God is found in “everyday life,” and that everyday life, in his case, was the Spanish Civil War.

I wondered: How could one find the divine in war? But then the same question can be asked of all the fundamental challenges in life, and how we face them: How we respond to hatred and rejection, or the desire for revenge and justice — all those dilemmas are heightened in wartime.

Those dilemmas are, in a sense, the “dragons” of the film — turning points in our lives where we’re faced with potent choices, choices that are going to affect our future.

“There Be Dragons” is about the very different choices that people take at those turning-points — temptations, if you like — and how hard it is, and yet how necessary, to escape cycles of hatred and resentment and violence.

Joffe talks about the setting of war as a paradigm for senseless violence, and what intrigued him about Escriva’s story was the young man’s heroic ability to overcome the hatred engulfing his society and encourage hope when it seemed beyond reach.

So many horrible, horrendous acts between people seem unforgivable, unredeemable, impossible to move beyond.

But forgiveness is possible! Cycles of violence can be halted, as President Mandela demonstrated in South Africa. Forgiveness has been possible for many heroic people in Rwanda, and offered and taken by many brave Palestinians and Israelis.

Josemaría also claimed that ordinary people were quite capable of being saints — and I think this kind of heroic forgiveness is what he was talking about.

The inexhaustible possibility of forgiveness is what offers room for hope. But the price is high: It takes a deep sense of what it is to be fully human, a deep feeling for compassion — and a firm, individual, and yes, heroic resolve not to be caught up in prevailing hatreds, but to fight them with unremitting love.

The universal appeal of this powerful message is obvious, but it’s interesting that John Allen sees potential intrigue within the Catholic world when this film is released.

As a footnote, here’s something worth thinking about. Joffé has now made films lionizing members of two groups historically regarded as sort of the matter and anti-matter of the Catholic universe: The Jesuits and Opus Dei. It’s ironic – and, perhaps, not a little bit revealing – that it has taken a “wobbly agnostic,” rather than a Catholic, to make movies with something positive to say about both.

Joffe was asked whether the film would likely speak more to believers or non-believers.

“There Be Dragons” takes faith seriously.

It takes sainthood seriously. But its appeal goes well beyond a religious audience.

The question presupposes a separation that is actually phony. We all live in a troubled world; we all deal with the pain and joy of everyday life, and though we may bring different interpretations of reality to bear on this experience, we all in the end inhabit the same torn and troubled world.

This is a film about believers and non-believers. I was deeply touched by Josemaría’s sense that we are all potential saints, his belief that everyone was finally capable of slaying their own dragons.

I hope people watching the film will see in it their own struggles with their own dragons, and recognize his point that no saint ever became a saint without struggle.