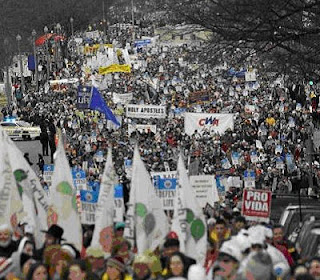 The growing movement of pro-life advocates who flow into Washington each January on the anniversary of Roe v. Wade for events culminating in the March for Life have stopped expecting the media to actually notice their swelling numbers and hear their voices. They’re taking coverage of the event directly to the people.

After more than 200,000 mostly young people (the future faces of the abortion battle) gathered on the Mall of Washington, carried signs and chanted, sang, laughed and networked with hundreds of others, they saw either nothing about it on tv news or in the papers, or pathetically distorted attempts to derail the event.

Fed up with what they call the “mind-boggling corruption” of media coverage of the march, a small production team has released a YouTube video revealing the truth about the enormous event and the skewed media reports that referenced it.

The same group released a documentary last year entitled “Thine Eyes,” which reveals the sheer size of the 2009 March for Life and the pro-life stories behind it.

“We had hoped to set the media straight, but we did not succeed,” says narrator Jack Cashill. “Their performance in 2010 convinced us that the issue at hand is not ignorance or incompetence, not even bias, but outright fraud.

“More than any other event, the march reveals the truly eye-popping, mind-boggling corruption of the mainstream media.”

Cashill responds to two particularly egregious media misrepresentations: one by CNN anchorman Rick Sanchez, who strongly implied that the number of pro-life marchers and pro-abortion demonstrators at the event were comparable.

“Well Rick, we counted at least 300,000 pro-life marchers to 5 pro-choice protestors. In the real world, that qualifies as most,” says Cashill.

The video also skewers a Newsweek article by Krista Gesaman, in which she claimed that young women were “missing” from the March for Life 2010. Gesaman’s article quoted a Washington police officer who said, in the reporter’s words, that “a majority of the participants are in their 60s and were the original pioneers either for or against the case.” The YouTube video responds with copious imagery documenting the large percentage of youth at the March, a great deal of whom were women.”

And though Cashill’s last line was added to punctuate their point, I agree with only half of it. There will be greater numbers next year, as there are every year. But in this group, there’s never anger. But plenty of ‘righteous’ determination.