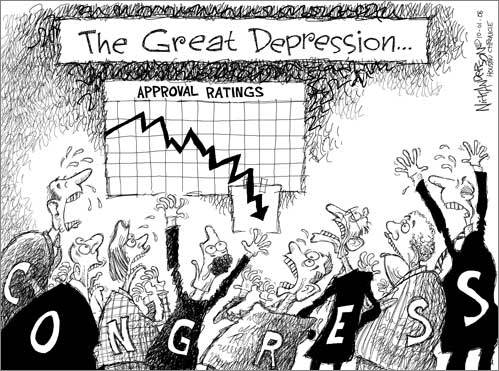 In this election, especially right now, the answer to Thomas Sowell’s question seems to be no.

The current financial bailout crisis has propelled
Barack Obama back into a substantial lead over John McCain — which is
astonishing in view of which man and which party has had the most to do
with bringing on this crisis.

It raises the question: Do facts matter?

Not to big, elite media. And politicians in control of them.

Fact Number One: It was liberal Democrats, led by Sen.
Christopher Dodd and Congressman Barney Frank, who for years —
including the present year — denied that Fannie Mae and Freddie Mac
were taking big risks that could lead to a financial crisis.

It was Sen. Dodd, Congressman Frank, and other liberal Democrats who
for years refused requests from the Bush administration to set up an
agency to regulate Fannie Mae and Freddie Mac.

It was liberal Democrats, again led by Dodd and Frank, who for years
pushed for Fannie Mae and Freddie Mac to go even further in promoting
subprime mortgage loans, which are at the heart of today’s financial
crisis.

Alan Greenspan warned them four years ago. So did the chairman of
the Council of Economic Advisers to the president. So did Bush’s
secretary of the Treasury, five years ago.

Yet, today, what are we hearing? That it was the Bush administration
“right-wing ideology” of “de-regulation” that set the stage for the
financial crisis. Do facts matter?

Here are some interesting facts, starting with Congressman Barney Frank. Starting with a recent report in the Boston Globe.

‘THE PRIVATE SECTOR got us into this mess. The government has to get us out of it.”

That’s Barney Frank’s story, and he’s sticking to it. As the
Massachusetts Democrat has explained it in recent days, the current
financial crisis is the spawn of the free market run amok, with the
political class guilty only of failing to rein the capitalists in. The
Wall Street meltdown was caused by “bad decisions that were made by
people in the private sector,” Frank said; the country is in dire
straits today “thanks to a conservative philosophy that says the market
knows best.” And that philosophy goes “back to Ronald Reagan, when at
his inauguration he said, ‘Government is not the answer to our
problems; government is the problem.’ ”

In fact, that isn’t what Reagan said.

Barney Frank’s talking points notwithstanding, mortgage
lenders didn’t wake up one fine day deciding to junk long-held
standards of creditworthiness in order to make ill-advised loans to
unqualified borrowers. It would be closer to the truth to say they woke
up to find the government twisting their arms and demanding that they
do so – or else.

The roots of this crisis go back to the Carter administration. That
was when government officials, egged on by left-wing activists, began
accusing mortgage lenders of racism and “redlining” because urban
blacks were being denied mortgages at a higher rate than suburban
whites.

The pressure to make more loans to minorities (read: to borrowers
with weak credit histories) became relentless. Congress passed the
Community Reinvestment Act, empowering regulators to punish banks that
failed to “meet the credit needs” of “low-income, minority, and
distressed neighborhoods.” Lenders responded by loosening their
underwriting standards and making increasingly shoddy loans. The two
government-chartered mortgage finance firms, Fannie Mae and Freddie
Mac, encouraged this “subprime” lending by authorizing ever more
“flexible” criteria by which high-risk borrowers could be qualified for
home loans, and then buying up the questionable mortgages that ensued.

Some reporters are weaving quite a story out of the facts. Frank’s “fingerprints are all over this fiasco”, Jacoby states.

Time and time again, Frank insisted that Fannie Mae and
Freddie Mac were in good shape. Five years ago, for example, when the
Bush administration proposed much tighter regulation of the two
companies, Frank was adamant that “these two entities, Fannie Mae and
Freddie Mac, are not facing any kind of financial crisis.” When the
White House warned of “systemic risk for our financial system” unless
the mortgage giants were curbed, Frank complained that the
administration was more concerned about financial safety than about
housing.

The reports of this background are spreading, because some reporters
have waded through the history and bulky facts of a complicated story. Like Bill Sammon.

Now that Fannie Mae is at the epicenter of a financial
meltdown that threatens the U.S. economy, some are raising new
questions about Frank’s relationship with Herb Moses, who was Fannie’s
assistant director for product initiatives. Moses worked at the
government-sponsored enterprise from 1991 to 1998, while Frank was on
the House Banking Committee, which had jurisdiction over Fannie.

Both Frank and Moses assured the Wall Street Journal in 1992 that
they took pains to avoid any conflicts of interest. Critics, however,
remain skeptical.

“It’s absolutely a conflict,” said Dan Gainor, vice president of the
Business & Media Institute. “He was voting on Fannie Mae at a time
when he was involved with a Fannie Mae executive. How is that not
germane?

Go back further for background on Fannie Mae, to this New York Times piece…from 1999.

Fannie Mae, the nation’s biggest underwriter of home
mortgages, has been under increasing pressure from the Clinton
Administration to expand mortgage loans among low and moderate income
people and felt pressure from stock holders to maintain its phenomenal
growth in profits.

In addition, banks, thrift institutions and mortgage companies have
been pressing Fannie Mae to help them make more loans to so-called
subprime borrowers. These borrowers whose incomes, credit ratings and
savings are not good enough to qualify for conventional loans, can only
get loans from finance companies that charge much higher interest rates
— anywhere from three to four percentage points higher than
conventional loans.

‘’Fannie Mae has expanded home ownership for millions of families in
the 1990’s by reducing down payment requirements,'’ said Franklin D.
Raines, Fannie Mae’s chairman and chief executive officer. ‘’Yet there
remain too many borrowers whose credit is just a notch below what our
underwriting has required who have been relegated to paying
significantly higher mortgage rates in the so-called subprime market.'’

Franklin Raines. Who is he again?

Franklin Raines made $90 million while he was head of Fannie Mae and mismanaging that institution into crisis.

Who in Congress defended Franklin Raines? Liberal Democrats,
including Maxine Waters and the Congressional Black Caucus, at least
one of whom referred to the “lynching” of Raines, as if it was racist
to hold him to the same standard as white CEOs.

Even after he was deposed as head of Fannie Mae, Franklin Raines was
consulted this year by the Obama campaign for his advice on housing!

The Washington Post criticized the McCain campaign for calling
Raines an adviser to Obama, even though that fact was reported in the
Washington Post itself on July 16th. The technicality and the spin here
is that Raines is not officially listed as an adviser. But someone who
advises is an adviser, whether or not his name appears on a letterhead.

The tie between Barack Obama and Franklin Raines is not all one-way.
Obama has been the second-largest recipient of Fannie Mae’s financial
contributions, right after Sen. Christopher Dodd.

But ties between Obama and Raines? Not if you read the mainstream media.

Facts don’t matter much politically if they are not reported.

They’re being reported. Beyond the vertical drop in the already-low approval rating of Congress…Will they matter much?

(HT to Sheila and the AFA.)