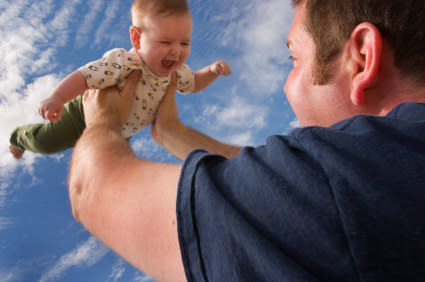 An article in the Wall Street Journal this week reviewing research on the way fathers bond with their children drew the following exchange in the comments section:

Richard McDermott: Can these lab researchers figure out where my Dad put my nose after he stole it some 40 years ago?

That perfectly sums up one of the distinctive things about the way dads play with their kids: the element of surprise and silliness that can snap a child out of boredom or crankiness and make them laugh.

“In one study, when a preschooler grew tired and started crying, his father flipped the child upside-down into a midair headstand,” reports the Journal. “Another dad sparked his toddler’s interest in playing by yelling in mock distress, “Ow, that smarts!” when the child used a toy doctor’s kit to give him an imaginary shot in the arm.”

In another study researchers left dad and child (and separately mom and child) alone in a lab without toys for two or more minutes and asked the parent to make the child laugh. One dad snatched a rug off the floor and wore it on his head. Others chased their children around the room or made funny faces. Mothers felt more stressed by the lack of toys but in their own way got the children moving and having fun.

For decades, it seems, all the research about parental bonding and influence on children’s wellbeing involved mothers. Now researchers are studying fathers and discovering the value of their contribution. Here are four aspects of that contribution highlighted by family scholar Brad Wilcox based on a 2013 book, Gender and Parenthood, he co-edited with Kathleen Kovner Kline.

The power of play: The physicality, randomness and excitement has a purpose. “From a Saturday morning spent roughhousing with a four-year-old son to a weekday afternoon spent coaching middle-school football, fathers typically spend more of their time engaged in vigorous play than do mothers, and play a uniquely physical role in teaching their sons and daughters how to handle their bodies and their emotions on and off the field.”

Protecting his own: Fathers play an important role in protecting their children from threats in the larger environment. … [F]athers, by dint of their size, strength, or aggressive public presence, appear to be more successful in keeping predators and bad peer influences away from their sons and daughters. As psychologist Rob Palkovitz notes in our book, ‘paternal absence has been cited by multiple scholars as the single greatest risk factor in teen pregnancy for girls.’”

Wilcox ends by graphing data that shows the protective effect that great – and even “good enough” – fathering can have on children as they grow up. If girls are less likely to get pregnant, boys are less likely to engage in delinquent behaviour when dad is present and engaged. The dad effect is also strong for depression, which is far less common among teens with a high quality relationship with their father.

All in all, it seems high time to break the news to dads about just how important they are to their kids.