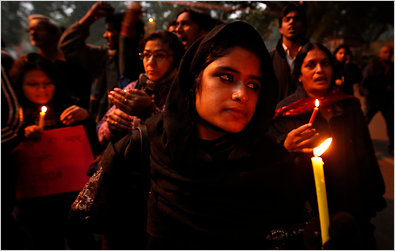 In light of the horrific news that came out of India during New Zealand’s summer holidays, I want to share with you all an impassioned article from the Sydney Morning Herald about the terrible plight of women around the world, and particularly in China and India. The authors, V Rukmini Rao and Lynette Dumble, are from the Gramya Resource Centre for Women in India, a “group of women who are development activists and from the women’s movement for equality”. In this article they argue that fewer girls will lead to a more dangerous, violent world: an argument that we ran at the beginning of 2011 on this blog.

The authors question the optimism of institutions like the World Bank, which claim that the child sex ratios skewed towards males in China and India are peaking and that the “missing girls” phenomenon can be addressed in Asia with “continuing vigorous efforts to reduce son preference”.  Instead of solely blaming “patrilinear mindsets”, the authors recognise that those mindsets only brought about the current crisis in female numbers by:

“…acting in tandem with imposed population control programs, increasingly cheap technologies that identify an unborn child’s sex, and the availability of abortion that stretches beyond the rule of law…”

As we have seen so recently, a shortage of young women does not “empower” women, or make them more “valuable in their scarcity”.  Instead:

“a masculinised sex ratio has instead amounted to the increased likelihood of girls and women contending with rape, abduction, bride-sharing, trafficking, forced marriage, and various other forms of violence and discrimination.”

This can be seen in both India and China:

“…a significant correlation between increased crime and the falling female component of the sex ratio in India, and a doubling of crime rates during the recent period of male-dominated sex ratios in China.

Defying widely held impressions, the crime of rape is yet to be officially linked to masculinised sex ratios. Yet, according to 2011 statistics from India’s National Crime Records Bureau, rape has been the country’s most rapidly growing crime since 1971.

Increasing by a staggering 792 per cent in those 40 years, rape dwarfs the rise in other serious crimes such as murder (106 per cent), armed robbery (27 per cent) and kidnapping (298 per cent).

At the same time, in India’s states where the sex ratio is highly skewed in favour of males, the daily reports of rape and gang rape are consistent with notions that a surplus of men, devoid of the feminising influence of sisters, girlfriends and wives, are driven towards committing violent crimes against women.

In fact, it might well be said that to deny the link between the country’s masculinised sex ratio and national average of 22 women raped each hour is to live in disgraceful disregard for the lifelong suffering the crime inflicts upon girls and women.”

Thus, not only does gendercide imperil girls in the womb and in their first years in the world, it continues to make the world a more dangerous place for women who survive into adulthood. Hopefully one bright spot out of the terrible tragedy in India will be a greater awareness of the perilous world girls inhabit, from conception.