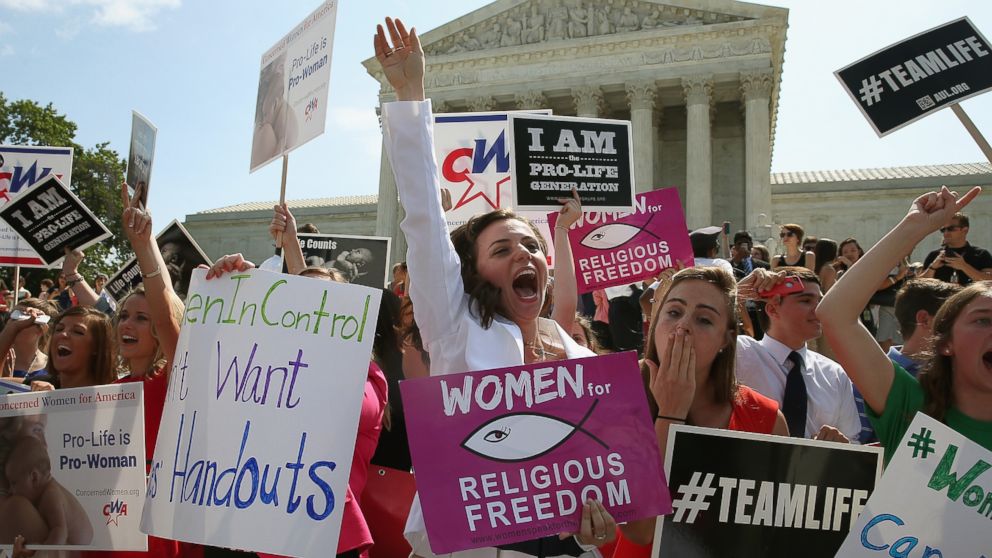 The Religious Freedom Restoration Act (RFRA), signed into law under President Bill Clinton after near unanimous approval in the House and Senate in 1993, applied a two-pronged test to any attempt by government to impose a federal law that substantially burdens citizens’ free exercise of their religion. The first test requires the government to show it has a ‘compelling interest’ in enforcing such a sweeping law, and the second is that government was seeking the ‘least restrictive means’ possible to achieve its ends. There’s no way this federal fiat issued in January 2012 could possibly pass either of those tests.

The Becket Fund for Religious Liberty dubbed the HHS mandate ‘a contraception delivery scheme’, which describes it well. As the court cases piled up across the country and spectrum of employers from non-profit organizations to for-profit business owners, academic institutions to healthcare providers (see Little Sisters of the Poor v. Sebelius), government lawyers could not defend their claims coherently.

Here’s the breakdown of current cases against the federal government when those arguments have been heard in courts at all levels. Monday’s Supreme Court decision on Hobby Lobby will impact a great number of others, and certainly scored a victory for religious freedom.

The U.S. Supreme Court granted a landmark victory for religious liberty today, ruling in the case of Burwell v. Hobby Lobby that individuals do not lose their religious freedom when they open a family business. The court ruled 5-4 in favor of David and Barbara Green and their family business, Hobby Lobby, ruling that they will not be required to violate their faith by including four potentially life-terminating drugs and devices in the company’s health insurance plan or pay severe fines.

“This is a landmark decision for religious freedom. The Supreme Court recognized that Americans do not lose their religious freedom when they run a family business,” said Lori Windham, Senior Counsel for The Becket Fund for Religious Liberty and counsel for Hobby Lobby. “This ruling will protect people of all faiths. The Court’s reasoning was clear, and it should have been clear to the government. You can’t argue there are no alternative means when your agency is busy creating alternative means for other people.”

The decision also has important implications for over 50 pending lawsuits brought by non-profit religious organizations, such as the Little Sisters of the Poor, which are also challenging the mandate. In two different respects, the Supreme Court strongly signaled that the mandate may be struck down in those cases too. First, it rejected the government’s argument that there was no burden on the Green’s religious exercise because only third parties use the drugs. Second, it held that the government could simply pay for contraception coverage with its own funds, rather than requiring private employers to do so.

“The handwriting is on the wall,” said Windham. “The Court has strongly signaled that the mandate is in trouble in the non-profit cases, too.”

The Court upheld a June 2013 ruling by the Tenth Circuit Court of Appeals protecting Hobby Lobby and the Green family from the Health and Human Services (HHS) mandate. That mandate requires Hobby Lobby and co-founders David and Barbara Green to provide and facilitate, against their religious convictions, four potentially life-terminating drugs and devices in the company’s health insurance plan. The Greens argued that the mandate substantially burdened their religious beliefs in violation of a federal law, the Religious Freedom Restoration Act.

In an opinion by Justice Alito, the Court stated:

The plain terms of RFRA make it perfectly clear that Congress did not discriminate . . . against men and women who wish to run their businesses as for-profit corporations in the manner required by their religious beliefs. . . . Our responsibility is to enforce RFRA as written, and under the standard that RFRA prescribes, the HHS contraceptive mandate is unlawful.”

Justice Kennedy’s concurrence added: “Among the reasons the United States is so open, so tolerant, and so free is that no person may be restricted or demeaned by government in exercising his or her religion.”

There will be plenty to cover and analyze on this in the days to come. But here’s some good background worth reading, artfully written with accurate citations by creative thinker Tod Worner, news coverage as a play in three acts. Written just over two months ago, after oral arguments were presented in the Supreme  Court by plaintiffs and government lawyers in the HHS mandate cases justices would decide later, it ended with this:

Plaintiffs and defendant would rest. The Court would adjourn. The verdict will come to us in June.

Who is this young, promising man – this main character in our play? Perhaps we can know by considering him in each act: The Speech, The Executive Order, The Court Case. Perhaps.

This play, in three acts, is far from finished. There is more to be said and done. Will it end as a comedy? Or a tragedy? How will it end? How, indeed? We shall see. We shall see.

We now see how the Supreme Court ruled on this day in this pivotal case. We’ll see what comes next. Stay tuned.