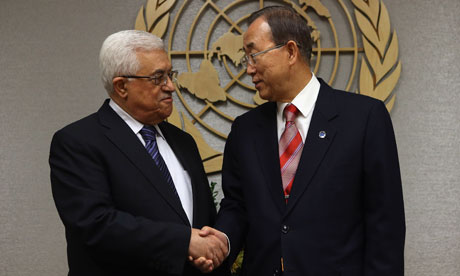 Palestinians are jubliant today having won a key vote in the UN General Assembly that implicitly recognises their sovereign statehood. The vote upgrades Palestine from observer status to that of  “non-member state”. In the event the UK was among 41 UN member states which abstained, because Palestinian President Abbas failed to meet the UK’s conditions. These were set out by UK Foreign Secretary, William Hague earlier in the week: “We support a negotiated settlement leading to a safe and secure Israel living alongside a viable and sovereign Palestinian state, based on 1967 borders with agreed land swaps, Jerusalem as the shared capital of both states, and a just, fair and agreed settlement for refugees.”

Hague called on Israel to cease building illegal settlements in the Occupied Territories, and for the Palestinian Authority to stop threatening to use the International Criminal Court to prosecute Israel for the settlement programme. He continued, “If progress on negotiations is not made next year, then the two-state solution could become impossible to achieve”.

A week before Hague spoke, the Egyptian government announced it had brokered a ceasefire between Israel and Hamas, the Islamic party governing the Gaza Strip. How long it will last is anybody’s guess. But as Hague’s speech demonstrates, the international community is focussing on dealing with the Palestinian Authority in the West Bank, and dangerously ostracising the Gazans in this effort.

Israel was right to agree to the ceasefire

As the ceasefire was agreed, conflict appeared to be escalating in the Levant. A suicide bomber wounded over two dozen in Tel Aviv, the first time a bus had been targeted in Israel for several years. Bus attacks, usually via suicide bombers, was a tactic that killed over 1000 Israelis between 2000 and 2006, before the Separation Barrier between the West Bank and Israel substantially reduced the movement of people (and bombs) across today’s de facto border. It is unclear how much weight the Israelis placed on the bombing, but it remains one of the most potent weapons for terror that any Palestinian group can use.

Along with Israel’s depletion of rocket stocks in Gaza and the successful destruction of almost all of the tunnels under the border with Egypt, it suits Israel much more to call a truce now rather than later, for several reasons. First, Israel has called up thousands of reservists and increased security measures across the country. These are extremely expensive actions that reduce quality of life and, outside of full war, can only be temporary. The disruption to Israeli society caused by an invasion would be enormous.

Second, Israel has achieved, with almost no loss of life, its aims of disrupting Hamas’ ability to attack Israeli citizens at home. It seems highly unlikely Israel did not foresee a strong retaliation by Hamas after the death of Ahmed Jabari. Their revenge was simply an increase in the number and firepower of rockets that have been aimed at Israeli towns since 2001 from a trickle to a torrent. Israel has shown restraint in not responding to every rocket with overwhelming force, or even tit-for-tat countermeasures, over the past ten years. Rather, it has struck occasionally, often against high-value targets like Jabari. The Israeli Defence Force have not been sucked into the indiscriminate and disproportionate use of force that mired the IDF’s actions against Hezbollah fighters in south Lebanon during the summer of 2006, through the use of artillery fire, for example. Keeping firepower on a tight leash has kept the international community and the public opinion of Israel’s supporters on side.

Third, there is an election in the new year and Benjamin Netanyahu’s political calculation is that the benefits of winning a limited military engagement outweigh the disruption to Israeli society a longer confrontation would entail. The United States has also refrained from the cagey equivocation that would signal support for a ground attack. Hilary Clinton and President Obama have both categorically called for a ceasefire and the cessation of hostilities.

So, no invasion of Gaza will happen this time, it appears. That is an extremely good decision. If nothing else, the past decade has shown how insurgencies trip up and bloody the nose of the most powerful and sophisticated armies. As much as the IDF keeps good quality reserve forces and has a fantastic war-fighting capability (in the conventional sense of defeating other countries’ armed forces in open and covert battle) the army knows it would be substantially bogged down in a prolonged operation in Gaza to disrupt the rocket men. “Clear, hold and build”, the dogma followed by British “ink-blot” operations in Afghanistan, involves vast numbers of infantry, highly vulnerable to short, sharp fire-fights and dreaded improvised explosive devices, particular in urban environments. There is little doubt an Israeli invasion of Gaza would attract the apprentices to the armourers who supplied first the insurgency in Iraq and now the war in south Afghanistan.

To return to Hague’s conjecture: the failure of the two-state solution won’t happen because of ideological opposition to the acceptance of the State of Israel. Most West Bank Palestinians accept the need for Israel – they just radically disagree on its border, the presence of settlements in Judea and Samaria, and Israeli intransigence over Jerusalem. This is the official policy of Fatah, who control the West Bank. Most Gazans probably accept the two-state solution too. That leaves Hamas, who officially don’t accept it. So Hamas agrees not to fight – otherwise they will be eviscerated from the air, or in a limited ground war – but they can see no philosophical solution that would bring about a lasting peace.

And therein lies the problem. The ground conditions in Gaza will, without international assistance, get even worse. Hamas cannot go forward without accepting the two-state solution and the explicit right to exist of the State of Israel. It refuses. It will not renounce violence (and mean it) either. Nor will it abide by the most basic dictum in international politics, pacta servanda sunt, and be bound by prior, agreed obligations. Thus Hamas fails all three of the tests the international community has imposed through the so-called Quartet of the United States, EU, Russia and UN (and sealed by a Security Council Resolution), which must be met before it will accept Hamas into a negotiating process.

Yet without international assistance the humanitarian plight of the Gazans will continue to worsen. The economy has been on a ten-year slide, only alleviated by the tunnels and the chaos in Egypt which opened up more goods and materials that could be smuggled under the no man’s land. Since 2007, the official border with Egypt has been closed, and Israel has prohibited all but the most essential travel (and to its credit, often accepts medical emergencies that require treatment in Israel). Now those tunnels are gone, and President Morsi in Egypt is under considerable pressure to grip the Sinai, secure the border with Israel and regulate tightly the tunnel network. The vice will continue to grip and crush Gaza.

It will stick in the craw of everyone who reads this, but some degree of rapprochement with Hamas is essential if any improvement is going to occur. Don’t think of this view as a principled acceptance of Hamas, Islamist ideology, violence or flat-earthers who deny the right of existence of the State of Israel. Do think of it as adopting the Israeli policy of suspending disagreement, and accepting Hamas’ position while facts-on-the-ground are established. These facts concern an improvement in the living standards of people in the Strip: importing materials for building projects, exporting of goods and services, and the creation of a semblance of economic growth. Industry and agriculture will draw disaffected young men off the streets, where they have little hope and are easy fodder for Islamists, and give them an income and the capacity to improve their lives.

Before people say that this will only encourage Hamas’ intransigence and the use of violence, compare this stance with the war on drugs and with the surge in Iraq, examples where substantial changes in tactics improved the likelihood of strategic success without undermining fundamental principles.

By switching from the criminalisation of drug takers to treating users as suffering from a set of medical problems, demand for drugs falls: more addicts go clean for longer and, other things being equal, less drugs are sought, before the question of legalisation is reached. Dealers, in fact, can be punished harder.

In Iraq, by placing American soldiers back in towns, tightening the rules on the use of force, and turning Iraqi groups from their fight against the United States and “awakening” them to foreign insurgents, the US drove a wedge between the insurgents and Iraqi civil society, winning the peace even if it cost more lives and money, because strategic defeat and failure was unacceptable to the American people.

What Israel and the international community must do now

The truth is that the Israelis hold most of the cards in this limb of the Middle East peace process. It is perfectly possible that Israel can change strategy and adopt a different approach to improving the lot of the Gazans. The Israeli right has usually made the biggest moves towards peace, because Israeli popular sentiment only accepts concessions made from positions of strength. The Camp David Accords (which led to a sustained peace with Egypt) was agreed by Menachem Begin, and the unilateral withdrawal of settlements and  soldiers from Gaza in 2005 was led by Ariel Sharon. The South Lebanon withdrawal in 2000 under the leadership of Ehud Barak, a prime minister from the left who was something of an outlier, was only possible given Barak’s prestigious military career.

The international community and Israel must work together immediately to alleviate the plight of the Palestinians in Gaza. Re-open the border with Egypt, but police it properly. Gaza doesn’t need great donations of aid; its people are resourceful enough, and they have friends and family outside whom they can trade with, and from whom they receive remittances.

The border, however, needs to be properly policed. Not by the European Union’s border assistance mission, but by hard-nosed Americans who are used to stopping drug shipments cross from Mexico (and the associated cartel-orchestrated violence). The border post at Rafah should be opened within months, with cargo scanners, x-rays, drug detecting equipment (including dogs, with suitable cultural sensitivity), lots of manpower (and women too), and the tunnels shut for good.

Tony Blair, the Quartet’s representative, should put his full effort into achieving this technological, logistical and political feat, as soon as possible. Other than remove a handful of border posts, he has achieved little over the past five years, but this might be one discrete project where his input will have a benefit.

As distasteful as it might be, working with Hamas is the only way to relieve the Gazan pressure-cooker. Otherwise Hague’s prediction will prove right: there will be no peace.

Peter Smith is a lawyer living and working in London.

Peter Smith is a lawyer who works in central London. He has previously worked in Parliament, for Edward Leigh MP. More by Peter Smith