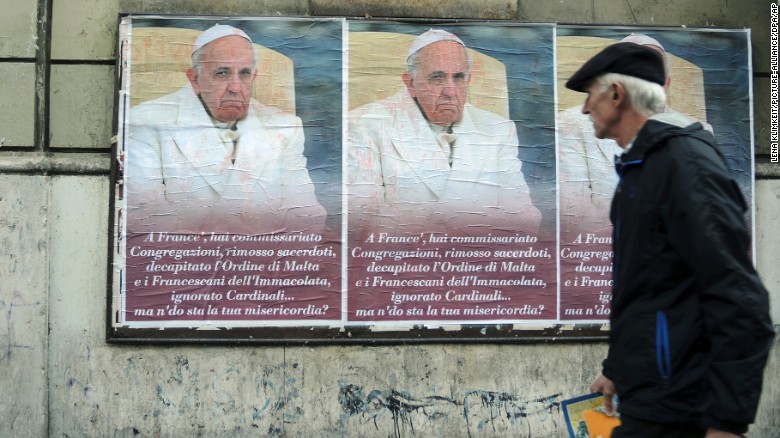 Monday, March 13, marked the fourth anniversary of the election of Pope Francis. Normally an occasion like this is an opportunity for celebration and generous tributes. But this time, at least in the Anglophone press, the dominant note was critical. Many picked up on a bizarre incident in early February. One night posters were plastered on walls of Roman buildings depicting a scowling Pope. Below it was a caption:

“Ah, Francis, you have intervened in Congregations, removed priests, decapitated the Order of Malta and the Franciscans of the Immaculate, ignored Cardinals… but where is your mercy?”

Francis has made the mercy of God the key theme of his Pontificate. But his critics complain that he lavishes it on sinners, heretics and pagans while withholding it from well-behaved orthodox clergy. Some journalists talk of a “disastrous Papacy”; others of schism.

The discontent was simmering long before the publication of Amoris Laetitia (The Joy of Love) in April last year, but this document gave his critics a casus belli – or the next best thing, a footnote. Footnote 351 to paragraph 305 suggested that sometimes, under certain special circumstances, with close and attentive spiritual guidance, it might be possible for a divorced and remarried person to receive Holy Communion.

This threw petrol on the fire for the Pope’s opponents. Ever since they have been suggesting that he is dismantling the traditional teachings of the Catholic Church on its sacraments, the demands of the moral law, and sin. At the end of March, the University of Paris-Sud is even going to hold a conference on “the canonical problem of the deposition of heretical popes” – an event which is certain to be given top billing by journalists who have drunk the Kool-Aid of Franciscophobia.

Although Pope Francis is orthodox and is not an undercover agent for the Masons, the issue of receiving Communion is undeniably important, in fact, transcendentally important. He could have made life easier for everyone by choosing his words more carefully. But it is petty and prejudiced to focus obsessively, always and only, on footnotes.

I have read a number of articles which criticise Pope Francis, some detailed and scholarly, some breezy and journalistic, some feather-brained. In not one of them did the author acknowledge the Pope’s zeal and piety. No commendations, no pat on the back, no condescending “attaboy”, no faint praise: just damning.

So, just for the sake of argument, just for this week, let’s bracket this issue and focus on what is indisputably positive about the 266th pontificate.

In the days before his election, Jorge Bergoglio spoke briefly to his follow cardinals about what sort of man the Church needed as Pope. The Cardinal of Havana, Jaime Ortega, asked Bergoglio for his notes, which were later published in the Cuban magazine Palabra Nueva. He made two fundamental points in this “Papal Gettysburg” (as biographer Austen Ivereigh described it) which have characterised his Papacy.

(1) The metric for a “successful” Church: evangelisation

There is a sign which is often displayed in front of Evangelical churches: “if being a Christian were a crime, would there be enough evidence to convict you?” The message from Francis is that there ought to be. “The sweet and comforting joy of evangelizing” is why the Catholic Church exists. It is the command which Christ gave as his farewell words to his disciples. He told the cardinals:

“The Church is called to come out of herself and to go to the peripheries not only in the geographic sense but also the existential peripheries: those of the mystery of sin, of pain, of injustice, of ignorance, of doing without religion, of thought and of all misery.”

The Catholic view is that Christ is the answer to all of human anxieties and sorrows. No one is too distant from God to be saved, not an ISIS terrorist, not an abortionist, not a paedophile, not a Mafia extortionist, certainly not Richard Dawkins. But are all Catholics bringing Christ to the “peripheries”? Probably not.

Active and urgent spreading of the Christian Gospel is a constant theme of the documents of the Second Vatican Council. But it is not one which has trickled down to all bishops, all priests, and all parishes. That is what Francis wants to change. He is not trying to become post-Christian; he wants to convert the post-Christians.

A renewed fervour for evangelisation is the key to understanding everything that Francis does and says (even Footnote 351). Vatican II may have finished more than 50 years ago, but many Catholics have not absorbed its message that they are called to be apostles and to change the world from within. Instead, they live in a kind of spiritual dhimmitude in an increasingly secular world and gossip in their ghettos about other Catholics.

But where the Pope’s message filters through to ordinary Catholics, there are stirrings of new life – more care for the disabled, for refugees, for the poor and for the elderly. There is a clearer appreciation of God’s mercy. This is a point which is best understood by Catholics, perhaps, but no one has promoted the sacrament of Confession more than the present Pope. So much for ignoring settled Catholic doctrine!

The second point galls his critics. Francis believes that the main obstacle to evangelisation is not secular humanism but what he calls “spiritual worldliness”. A character in the satirical American comic strip Pogo memorably said, “we have met the enemy, and he is us”. That is a nice summary of the Pope’s view of the languishing state of the Catholic Church in many Western countries. As Bergoglio told the cardinals before the conclave,

“When the Church does not come out of herself to evangelize, she becomes self-referential and then she gets sick. The evils that over the course of time happen in ecclesial institutions have their root in a self-referentiality and a sort of theological narcissism.”

At the time, Bergoglio seemed to be suggesting that navel-gazing had become a competitive sport for some Catholics. And as it turned out, the intensity and volume of the criticism which he has had to endure prove it. If only his opponents had expended one-tenth of the energy on “evangelising” as they have in swotting up on Vatican gossip and writing indignant blog posts!

Whether or not Donald Trump is fighting a “deep State”, a hostile bureaucracy which silently undermines his program for making American Great Again, there can be no doubt that Francis is. The articles of the vaticanisti are full of gossip from “Vatican employees” – which Francis has memorably condemned as “terrorism” – about who’s in and who’s out, whether he can be persuaded to resign, etc. Even before he became Pope, Francis slammed such mutterings as “the worldly Church that lives within herself, of herself, for herself”.

This is the deeply rooted mentality which Francis wants to purge from the Church. No wonder he sometimes looks severe.

The Pope’s critics have every right to seek clarification for his words. But, as Catholics, they ought to heed all of his words, not just the ones which anger them. Francis has urged his flock to evangelise. When are they going to listen?

Michael Cook is editor of MercatorNet, who suspects that he may be guilty of some of the failings which he has censured above.