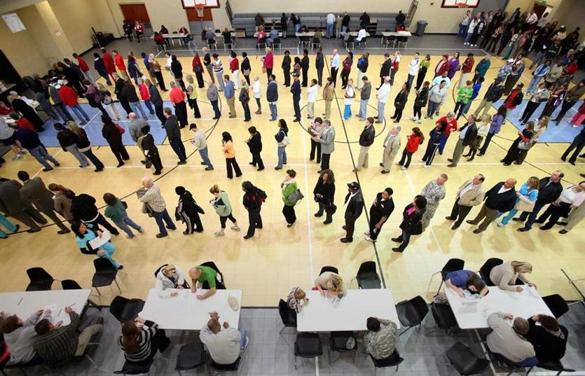 TUESDAY, 11.26PM (NEW YORK) So that was it. Billions of dollars and so much effort, only to continue the status quo. But in so doing we must grasp the fact that the United States is now a fundamentally different country than ever before.

Yes, of course, two parties have pretty much divided the nation for generations, but within that division was a general consensus around what American was and should be. Not now, no longer, never again. This is black and white, religious and secular, working for oneself and working for the state, north and south.

With demographics as they are, it’s difficult to see where and how the Republicans will ever be able to carve out a new coalition of support, unless the party becomes something other than what it is supposed to be. Two moderate, ersatz conservative candidates in succession have lost to a radical in radical’s clothing, and it’s unclear if a genuine conservative could do any better.

If the Republicans become a progressive conservative party, akin to Britain’s Tories for example, the right will split; unlike any other Western democracy, a quarter of America’s population is devout and will form an alternative party rather than support a new, morally liberal Republican entity. That would guarantee further Democrat Presidents.

In terms of what it all means for policies, remember that while we don’t know how many Supreme Court judges will die or retire due to ill health in the next four years, four of them are over 74 years old -– one 76, another 79 -– so there is a very good chance that one if not two will be replaced. The position is held for life, so these appointments are vital, and profoundly important. With elected representatives increasingly reluctant or unable to decide on moral issues without recourse to the courts, this means that subjects such as abortion and marriage will be decided by judges.

The American government will now pursue same-sex marriage, homosexual triumphalism, and intolerance for dissident views to a degree that will shock some of the more naive within the Christian and morally conservative community.

If you doubt me, look at the Canadian and British experience. Abortion, contraception, and euthanasia will be treated as self-evident truths, and crucial elements in the “civilized” society that an unleashed Obama is committed to creating. Because of the federal nature of the United States there will be resistance and local opposition, but the overall flavour of the country will change irretrievably.

As with all things American, it concerns not just itself but the greater world. In the paradoxical world of the liberal, forcibly exporting ideology to vulnerable foreign countries is seen not as imperialism but as liberation. As such, the Clinton policy of linking foreign aid to an insistence on abortion and condoms will be resurrected, and pressure applied to Christian-based nations that still hold to traditional moral values and virtues. The same pressure will not, of course, be applied to the Islamic world.

Then there is the culture of the governing class. Whatever the failings of Republican Presidents and earlier Democrats, they maintained a certain ethical certainty within Washington political circles. Moral aspirations were still similar to those of a century earlier, so that even when individuals fell or failed, the established order held firm. That established order is now entirely different, and flamboyant actors will replace Christian ministers, foul-mouthed pop stars replace mainstream authors at White House parties.

It will be, as it were, not your mother and father’s United States. The last best hope of Christians and conservatives has become a strange, blurred shadow of what it once was. Four more years… of struggle, activism, and frustration.

Michael Coren is a broadcaster and writer living in Toronto, Canada. His latest book is Heresy: Ten Lies They Spread About Christianity, available at Amazon.com. His website is www.michaelcoren.com, where he can be booked for speeches and his books purchased.