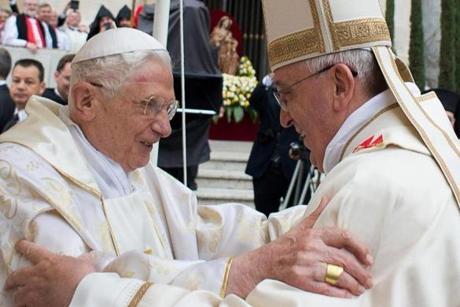 In an age of skepticism or denial of the transcendent, there’s a mighty lot of interest in the pope.

Which one, though? Surely Francis has been appearing everywhere, on magazine covers and in unexpected Italian newspaper interviews, on the other end of spontaneous telephone calls the press loves to talk about, in photos embracing the vulnerable, disabled, impaired, rejected, dejected, disfigured. Or by contrast, delighting children who break ranks to run to him, when he scoops them up to put them in the papal chair, or in the popemobile, or on stage  in an audience. Or enjoying countless groups of young people and married couples lined up for their ‘selfies’ with the Holy Father which promptly get posted on social media.

That Francis has been very busy lately with the end of Lent, Holy Week, Easter, preparations for the canonization of two of his predecessors, a major event Sunday which was attended by his immediate predecessor, the first Pope Emeritus, Benedict XVI. He, of little popularity with pop culture and pop media, which is irrelevant to their contribution to the eternal truths and hopes for humanity.

If the media had followed the daily homilies of Pope Francis through Holy Week and other times as much as they follow the ‘big moments’ when they can excise certain lines from his impromptu interviews and build false narratives around them, the media would (presuming honesty on their part) see a different Francis than they’re presenting to the world.

For the sake of brevity and pithy import, for which Francis is actually known by those who follow him daily, here’s a snip from the homily he gave at the canonization of Pope John XXIII and Pope John Paul II.

I’m told by a priest in the first row near the front of St. Peter’s that at that moment, when Francis said ‘the pope of the family’ and pointed out the ‘Synod on the family’ this year and next, the massive crowd erupted in such spontaneous eruption of joyful applause and affirmation, even the pope seemed startled, as were these priests gathered around him. Something was in the air, he said, and it was palpable.

For one thing, it was the presence of four popes, two of them saints, no matter how the world sees sanctity or whether it sees it or not. John XXIII convened the Second Vatican Council, against the advice of some experts and pundits, to renew the missionary mandate of the church. Progressives turned the reference to ‘throwing open the windows of the church’ to meaning it needed to let the modern world in. Theologians today explain, understandably to those listening closely to Francis, much less his three predecessors, that it really meant opening those windows to let the heart of the church out, to go “out to the peripheries” as Francis often says, where people are hurt and lonely, afflicted and suffering.

We hear so much these days about ‘battles’, for religious freedom and conscience rights and basic ones like the right to life (on which all other rights are based) and the recognition of the fundamental dignity of the human person. The popes have tried to reintroduce this language, at the UN General Assembly among other places, as the moral grammar on which all other rights rest.

Francis has simply re-framed the message in continuity with his predecessors that the church is the ‘field hospital’ for the embattled and wounded humanity suffering, and in need of balm for the body and soul, soothing relief and healing. It didn’t become new with Francis, he only showed a different face of the same body, the church.

As former Vatican Ambassador Raymond Flynn, friend and frequent guest on my radio show put it, this was a ‘renewal of hope’.

When I looked out at the massive crowd of people at the canonization of Popes John Paul II and John XXIII in St. Peter’s Square yesterday, I could hardly believe what I was seeing. Now I know that the Catholic Church has always regarded itself as “universal,” but what I saw today was a “multicultural Catholic Church.”

Maybe it’s always been there, but I never saw it like this…

We saw the historic past at the Vatican this week, but now we are about to see its future. I got a preview of the new face of the church in St. Peter’s Square today. Frankly, I am pretty positive and hopeful, even in this chaotic and polarized world.

Some things, few as they are, transcend that. This is one.