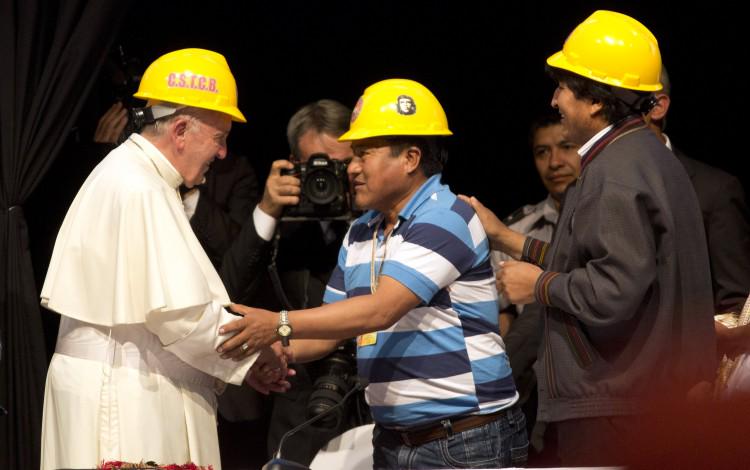 Last Thursday Pope Francis was in Bolivia, the second of the three countries in his South American visit. There he addressed the Second World Meeting of Popular Movements. Austen Ivereigh of Catholic Voices UK says: “It was one of the most comprehensive and significant addresses of his trip, a lengthy and visionary challenge both to the existing world order and to ideological revolutions that bring about only superficial change.”

Before his speech, however, Francis had to sit through a lengthy and tedious half-hour self-congratulatory diatribe by President Evo Morales (sporting a Che Guevara motif) against the USA and the United Nations, among many targets, which the audience — representing disenfranchised workers and peasants from across the world — listened to dutifully, impatient to hear the Pope. More than 1,500 delegations of street sellers, fishermen, laborers, farmers, garbage sifters and ragpickers  from 40 countries took part in the meeting.

“We need change; we want change”

The Pope then spoke for close to an hour, using many rhetorical devices to galvanize his audience and fill them with a sense of urgency. He repeated a number of times his call for what he called the “sacred rights” to the three “Ts” — tierra, techo y trabajo — or in English, the three “Ls” of land, lodging and labour — while offering a sober diagnosis of the failures of the current world economy to provide for the poorest. “Let’s not be afraid to say it,” he told the crowd to loud applause. “We need change; we want change.”

In my different meetings, in my different travels, I have sensed an expectation, a longing, a yearning for change, in people throughout the world. Even within that ever smaller minority which believes that the present system is beneficial, there is a widespread sense of dissatisfaction and even despondency. Many people are hoping for a change capable of releasing them from the bondage of individualism and the despondency it spawns.

In similar stark terms to the first part ofLaudato Si’, Pope Francis deplored the “unfettered pursuit of money” that undermined the common good and resulted in the exclusion of the weak.

Today, the scientific community realizes what the poor have long told us: harm, perhaps irreversible harm, is being done to the ecosystem. The earth, entire peoples and individual persons are being brutally punished. And behind all this pain, death and destruction there is the stench of what Basil of Caesarea called “the dung of the devil”. An unfettered pursuit of money rules. The service of the common good is left behind. Once capital becomes an idol and guides people’s decisions, once greed for money presides over the entire socioeconomic system, it ruins society, it condemns and enslaves men and women, it destroys human fraternity, it sets people against one another and, as we clearly see, it even puts at risk our common home.

A warning against superficial change

He quickly passed onto the question of what can be done, affirming the hundreds of disenfranchised before him as the key agents of future change. “You, the lowly, the exploited, the poor and underprivileged, can do, and are doing, a lot. I would even say that the future of humanity is in great measure in your own hands, through your ability to organize and carry out creative alternatives, through your daily efforts to ensure the three “L’s” (labor, lodging, land) and through your proactive participation in the great processes of change on the national, regional and global levels,” he told them, adding: “Don’t lose heart!”

But Pope Francis warned them against seeking superficial change through a mere change in government or a populist revolution. In an implicit reference to the kinds of movements headed by Evo Morales in Bolivia or the former Hugo Chávez in Venezuela — populist radicals who galvanized the poor through simplistic ideologies and authoritarian states — he said: “We know from painful experience that changes of structure which are not accompanied by a sincere conversion of mind and heart sooner or later end up in bureaucratization, corruption and failure.” True change must come from making people, not concepts, the ends:

We do not love concepts or ideas; we love people… Commitment, true commitment, is born of the love of men and women, of children and the elderly, of peoples and communities… of names and faces which fill our hearts. From those seeds of hope patiently sown in the forgotten fringes of our planet, from those seedlings of a tenderness which struggles to grow amid the shadows of exclusion, great trees will spring up, great groves of hope to give oxygen to our world.

This meant concentrating not on abstract ideals, but concrete human needs:

Of the leadership I ask this: be creative and never stop being rooted in local realities, since the father of lies is able to usurp noble words, to promote intellectual fads and to adopt ideological stances. But if you build on solid foundations, on real needs and on the lived experience of your brothers and sisters, of campesinos and natives, of excluded workers and marginalized families, you will surely be on the right path.

The Church, a key partner in three great tasks

The Church cannot and must not remain aloof from this process in her proclamation of the Gospel. Many priests and pastoral workers carry out an enormous work of accompanying and promoting the excluded throughout the world, alongside cooperatives, favouring businesses, providing housing, working generously in the fields of health, sports and education. I am convinced that respectful cooperation with the popular movements can revitalize these efforts and strengthen processes of change.

The Pope said he did not have concrete a concrete programme. “Neither the Pope nor the Church have a monopoly on the interpretation of social reality or the proposal of solutions to contemporary issues. I dare say that no recipe exists.” But he suggested three “great tasks” for the popular movements to take on.

The first was to create a human economy, one at the service of people rather than money. Such an economy would not only ensure that all had access to jobs, land and housing, but would “create the conditions for everyone to be able to enjoy a childhood without want, to develop their talents when young, to work with full rights during their active years and to enjoy a dignified retirement as they grow older. It is an economy where human beings, in harmony with nature, structure the entire system of production and distribution in such a way that the abilities and needs of each individual find suitable expression in social life.”

Such an economy was a practical, realistic goal, not a utopia, Pope Francis said; it would come about by realizing that the poor had a right to the fruits of the earth.

Working for a just distribution of the fruits of the earth and human labor is not mere philanthropy. It is a moral obligation. For Christians, the responsibility is even greater: it is a commandment. It is about giving to the poor and to peoples what is theirs by right. The universal destination of goods is not a figure of speech found in the Church’s social teaching. It is a reality prior to private property. Property, especially when it affects natural resources, must always serve the needs of peoples. And those needs are not restricted to consumption. It is not enough to let a few drops fall whenever the poor shake a cup which never runs over by itself. Welfare programs geared to certain emergencies can only be considered temporary responses. They will never be able to replace true inclusion, an inclusion which provides worthy, free, creative, participatory and solidary work.

The second task, he said, was to create unity, the historic ambition of the Patria Grande, as the forefathers of Latin-American independence described the “greater fatherland” of a united continent. That meant resisting modern forms of colonialism.

Colonialism, both old and new, which reduces poor countries to mere providers of raw material and cheap labor, engenders violence, poverty, forced migrations and all the evils which go hand in hand with these, precisely because, by placing the periphery at the service of the center, it denies those countries the right to an integral development. That is inequality, and inequality generates a violence which no police, military, or intelligence resources can control.

He then issued an historic apology — as have previous popes, and the Latin-American bishops in their documents — for the crimes committed against the indigenous people by the colonial Church. But in a riposte to the Morales narrative of a colonial Church on the side of the powerful against the people, he also reminded his listeners of the many priests and religious who stood up to powerful interests under the colony in defense of the native peoples, and warned that ideologically-driven attempts to erase the Church from society was an attack on the Latin-American people itself.

Here I wish to bring up an important issue. Some may rightly say, “When the Pope speaks of colonialism, he overlooks certain actions of the Church”. I say this to you with regret: many grave sins were committed against the native peoples of America in the name of God. My predecessors acknowledged this, CELAM has said it, and I too wish to say it. Like Saint John Paul II, I ask that the Church “kneel before God and implore forgiveness for the past and present sins of her sons and daughters”.[6] I would also say, and here I wish to be quite clear, as was Saint John Paul II: I humbly ask forgiveness, not only for the offenses of the Church herself, but also for crimes committed against the native peoples during the so-called conquest of America.

I also ask everyone, believers and nonbelievers alike, to think of those many bishops, priests and laity who preached and continue to preach the Good News of Jesus with courage and meekness, respectfully and pacifically; who left behind them impressive works of human promotion and of love, often standing alongside the native peoples or accompanying their popular movements even to the point of martyrdom. The Church, her sons and daughters, are part of the identity of the peoples of Latin America. An identity which here, as in other countries, some powers are committed to erasing, at times because our faith is revolutionary, because our faith challenges the tyranny of mammon.

The third task, he said, was “to defend Mother Earth”, the issue he had addressed inLaudato Si’.

Our common home is being pillaged, laid waste and harmed with impunity. Cowardice in defending it is a grave sin. We see with growing disappointment how one international summit after another takes place without any significant result. There exists a clear, definite and pressing ethical imperative to implement what has not yet been done. We cannot allow certain interests – interests which are global but not universal – to take over, to dominate states and international organizations, and to continue destroying creation. People and their movements are called to cry out, to mobilize and to demand – peacefully, but firmly – that appropriate and urgently-needed measures be taken. I ask you, in the name of God, to defend Mother Earth.

Austen Ivereigh is coordinator and co-founder of Catholic Voices in the UK. This article first appeared on its website as part of a more extensive coverage of the papal visit.