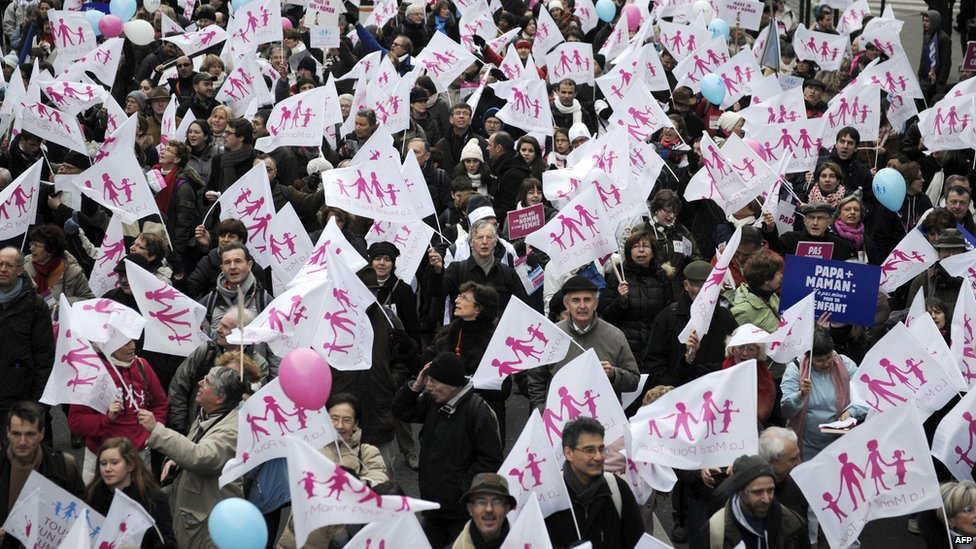 There was a huge rally against same-sex marriage in France at the weekend. C-FAM reports an unexpected feature of the opposition — something that should be kept in mind when various media report what the “gay community” etc says about certain issues:

Perhaps as many as a million people marched in Paris last Sunday and at French embassies around the world against proposed legislation that would legalize same-sex marriage in France.  One of the surprises in the French campaign for traditional marriage is that homosexuals have joined pro-family leaders and activists in the effort.

“The rights of children trump the right to children,” was the catchphrase of protesters like Jean Marc, a French mayor who is also homosexual.

Even though France is known for its laissez faire attitude toward sex, pro-family leaders were quick to organize huge numbers. When President Hollande announced his intentions to legalize homosexual marriage last November, a demonstration against the proposal gathered 100,000 protesters. And then what started as a debate about homosexual rights changed to one about a child’s right to a mother and a father, and the numbers in opposition exploded and has come to include unlikely allies.

Xavier Bongibault, an atheist homosexual, is a prominent spokesman against the bill. “In France, marriage is not designed to protect the love between two people. French marriage is specifically designed to provide children with families,” he said in an interview. “[T]he most serious study done so far . . . demonstrates quite clearly that a child has trouble being raised by gay parents.”

Jean Marc, who has lived with a man for 20 years, insists, “The LGBT movement that speaks out in the media . . . They don’t speak for me. As a society we should not be encouraging this. It’s not biologically natural.”