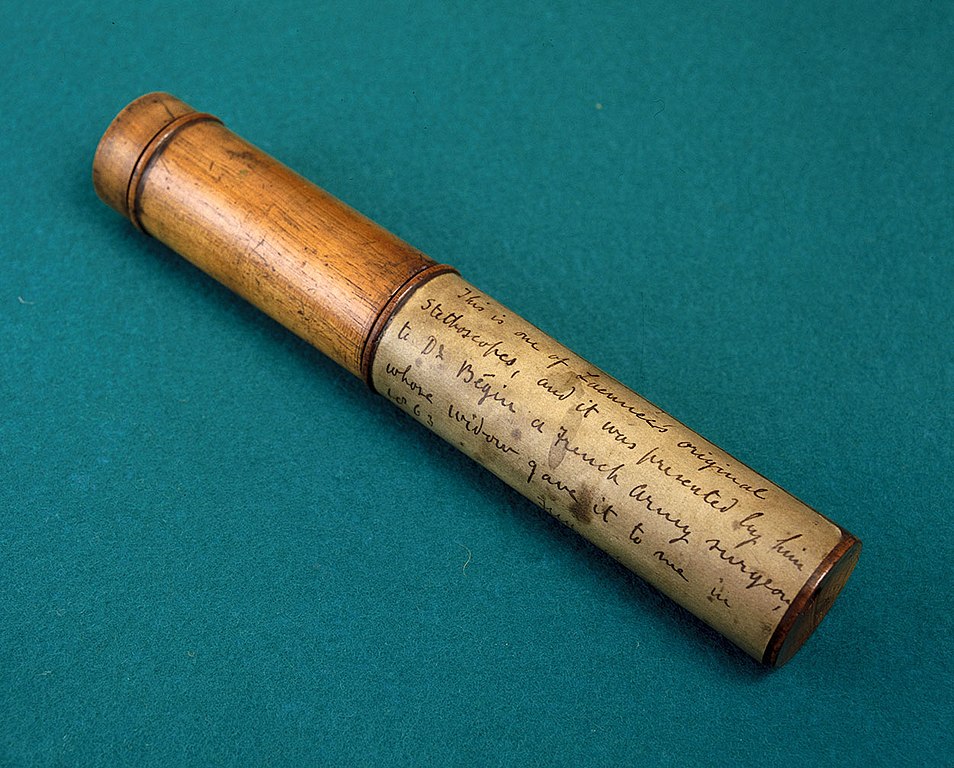 One of the original stethoscopes belonging to the French physician Rene Theophile Laennec (1781-1826) who devised the first stethoscope in 1816. (Wikipedia)

In his 2013 book Before Bioethics: A History of American Medical Ethics from the Colonial Period to the Bioethics Revolution, historian Robert Baker describes the origins of American medical ethics. One of his unique and most interesting points is to introduce the concept of “morally disruptive technologies” in medicine: innovations, such as the ventilator, that so significantly alter the medical landscape that they disrupt longstanding moral paradigms.

Given the tumultuous history of abortion in the United States, Baker’s analysis prompts two questions: First, how is it that the moral disruption caused by the stethoscope was reversed less than a century later with the monumental Roe v. Wade decision? Second, why did the advent of prenatal imaging technologies in the mid-twentieth century not have the same morally disruptive force as the stethoscope?

The Stethoscope and Abortion

Invented in 1816, the stethoscope allowed physicians to hear their patients’ heartbeats better—and more significantly, to detect a fetal heartbeat before the mother had felt her womb “quicken” with movement of the child within. In Before Bioethics, Baker illustrates how nineteenth-century American physicians used the stethoscope to cite evidence of life in the womb prior to quickening—groundbreaking information in an age when the pre-quickened fetus was viewed as mere “potential” life. At the time, even the Catholic Church reflected the contemporary distinction between the “unanimated” and “animated” fetus, through different penalties in canon law for abortions pre- and post-quickening.

Thanks to the stethoscope, American physicians began aggressively campaigning for the criminalization of abortion at every stage of pregnancy. Baker points out that as a result, by the end of the nineteenth century,

Finally, in an event that Baker considers the culmination of the stethoscope’s morally disruptive effects, Pope Pius IX officially removed the Catholic Church’s distinction between the animated and unanimated fetus in canon law in 1869. While some may debate Baker’s characterization of the stethoscope as a morally disruptive technology, he provides compelling evidence for considering it the force majeure in criminalizing early-term abortion in the nineteenth century.

Given the stethoscope’s drastic effects on medical and political dialogue surrounding abortion, how is it that they were reversed a mere century later with Roe v. Wade? An answer may be found in what transpired in the field of medical ethics in the intervening century.

The Right to Personal Autonomy

Bioethicist Jonathan F. Will details the pervasiveness of the “beneficence model” of medical ethics prior to the twentieth century, and its fall to the new “autonomy model” in the mid-twentieth century. Will describes how the dominant beneficence model during the abortion debates of the nineteenth century embodied the idea that “physician knows best”:

The prevailing medical literature, which supported the beneficence model and its emphasis on promoting medical benefits to be determined unilaterally by physicians using their specialized training, did not include a meaningful role for the patient in the decision-making process.

He writes that one of the first indications that the beneficence model would soon fade came from the case of Schloendorff v. Society of New York Hospitals (1914), decided by the New York Court of Appeals (that state’s highest court). In Schloendorff, Justice Benjamin Cardozo wrote this monumental phrase: “Every human being of adult years and sound mind has a right to determine what shall be done with his own body.”

According to Will, in the years following Schloendorff, a number of events ushered in and indicated the rise of patient autonomy. These included the adoption of the Nuremberg Code (1947), which made paramount patients’ voluntary consent in experimentation; the publishing of an appalling exposé by Henry Beecher of twenty-two troubling experiments conducted in the United States (1966), all of which lacked patient consent; and the adoption of the Declaration of Helsinki (1964), which expanded on the ethical standards set forth in the Nuremberg Code.

Will, however, conspicuously leaves out one important event—and one of particular significance to the rise of the autonomy model and the evolution of reproductive ethics. This, of course, is the landmark US Supreme Court case: Griswold v. Connecticut (1965), which gave married couples the “right to privacy” in using contraception, the sale and distribution of which the Connecticut Comstock Law had previously outlawed.

Although Griswold was not the first instance of the “right to privacy” interpretation of the Fourteenth Amendment, it was the first ruling to apply the right to healthcare—making it especially groundbreaking and relevant to the exposition of the autonomy model. The “right to privacy” is often better understood as a “right to personal autonomy,” the same interpretation that informed the Roe v. Wade decision eight years later, effectively reversing and erasing all legal vestiges of the previous century’s anti-abortion sentiment.

Just as the ground was being laid for Roe, the field of obstetrics began to implement groundbreaking ultrasound technology. Although first used in 1956, ultrasound equipment was not commercially available in the United States until the 1960s. By then, the seeds of the autonomy model planted in the early twentieth century had begun to sprout.

Because ultrasound imaging emerged just as the autonomy model was eclipsing the beneficence model, this new technology did not have the effect it might have had a century earlier. Furthermore, until real-time ultrasounds became commercially available in the late 1970s, ultrasounds were grainy, gray-scale, static pictures that did little to convince those skeptical of the humanity of life in the womb.

The publication of the influential Harvard Brain Death Criteria in 1968, which controversially called into question whether a heartbeat proved presence of life, also did little to convince those same skeptics. Alas, by the time 2-D, real-time ultrasounds came along, it was 30 years after the introduction of ultrasound technology; Roe v. Wade, with its protection of the right to abortion as a correlate of the “right to privacy,” was already enshrined in American political rhetoric and medical and legal codes.

Had ultrasound technology appeared ninety-nine years earlier—well before the advent of the autonomy model, when the AMA lamented the “belief, even among mothers themselves, that the foetus is not alive till after the period of quickening”—it probably would have contributed to the anti-abortion sentiments of the time, rather than barely registering in the abortion debates of the 1970s.

Regrettably, ultrasound imaging was not the morally disruptive force that the stethoscope and microscope had been for nineteenth-century America—precisely because twentieth-century America no longer had the same morals to disrupt. In the twentieth-century world of the autonomy model, the justification of a woman’s “right” to abortion on the basis of her “right to privacy” meant that the fetus’s personhood was subjugated to its mother’s autonomy at every stage of development.

While the stethoscope’s evidence rendered abortion at any stage unthinkable to nineteenth-century American physicians, the final decision in Roe makes perfect sense in the rising autonomy model. Forty-plus years after Roe v. Wade, the autonomy model is still dominant. America’s love affair with autonomy—even at the expense of other moral considerations—is evident from its abortion laws. The United States is one of only seven countries in the world that legally permits an elective abortion after 20 weeks, placing it in the top 4% of countries with the most permissive abortion policies.

Imaging technologies have at least some effect on the micro level, i.e., on individual women seeking out abortions; the pro-life nonprofit Save the Storks claims that four out of five “abortion-vulnerable” women who receive a free ultrasound from one of their mobile units ultimately decide not to pursue an abortion. However, this micro-level effect has not changed abortion considerations on the macro level, to the point of successfully passing any abortion restrictions.

Modern 3-D and 4-D ultrasounds can show fetal movement and distinctly human features as early as 8 weeks gestation, yet any efforts to restrict abortion based on the personhood of the developing child—even those with widespread popular support, such as restrictions on late-term and partial-birth abortions—are often defeated by rhetoric that echoes Justice Cardozo’s words in Schloendorff and gives credence to no moral consideration beyond autonomy: “My body, my choice.”

It is not my intention to yearn for the old beneficence model, which had its flaws. In providing no meaningful avenue for patient input in healthcare, it offered fertile ground for horrors such as the Tuskegee syphilis study. The field of medical ethics was right to move away from the paternalism of that model toward better respect and care for patients. The autonomy model has done much to check medical paternalism and has empowered patients to make their own meaningful healthcare decisions.

The autonomy model, however, is also far from perfect. In placing too much value on autonomy, unchecked and unbalanced, it paved the way for new horrors in human rights abuse—inadvertently diminishing the autonomy of the most vulnerable. Most glaringly, it has borne witness to the deaths of nearly 58 million unborn children since the decision of Roe v. Wade in 1973. It also gives a basis for growing support for legalized physician-assisted suicide in the United States, yet another practice rife with potential for abuse and diminution of autonomy—especially for the elderly, disabled, and terminally ill.

As medicine has become increasingly scientific over the course of history, it has also been subject to the consequences of scientific progress. With new technology comes new scientific evidence, which shapes our moral attitudes and is shaped by them in turn, often affecting our legal and medical practices. Yet these technologies do not emerge in a moral vacuum. External events significantly influence the evolution of society’s moral norms and values and play a major part in the collective decision-making that determines a new technology’s ultimate significance.

In order properly to integrate the scientific evidence presented by new technologies, bioethicists concerned with upholding meaningful autonomy—that which truly respects the patient’s dignity without harming others—would do well to encourage medical decision-making based on principles beyond the unbridled and ultimately destructive autonomy that modern society has come to uphold as the greatest good.

Grace Stark is an MA candidate in the Bioethics & Health Policy program at Loyola University Chicago. She has worked at the Food and Drug Administration, and has held internships at The Heritage Foundation, the Texas Public Policy Foundation, the VA, and in the Senate and the House of Representatives. This article has been republished with permission from Public Discourse.